Handkerchief nightmare? Beat the common cold by blowing your nose 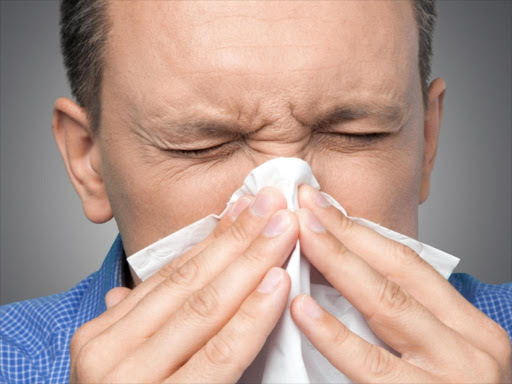 "Blowing your nose is a good way to let mucus out and it is said the best approach is a nostril at a time by blocking the other." /Courtesy

Dry or sore throats, blocked or running noses and sneazing.

Ah the common cold. And it spreads fast since it is communicable.

Dust, humid weather, allergies, high temperatures also have a role to play when it comes to this infection that makes an average of a week seem like eternity.

The nose, throat, sinuses, upper airways and lungs get infected, leaving a person with

watery nasal secretions for the first few days and a thicker and darker substance later on.

But dark mucus is natural and does not usually mean you have developed a bacterial infection, such as a sinus infection.

During the first three days of a common cold, the sufferer is contagious - he or she can pass the cold on to others - so it is recommended that the person stay at home and gets as much rest as possible.

If there are no improvements after a week, the infection may be bacterial and the individual may require antibiotics.

Human beings have been infected by this virus for centuries so management is what makes the difference.

Many people with the common cold simply draw the mucus back when it starts to run, usually irritating those around them.

Neighbours, at work places for example, get distracted and even angry as complaining about sniff relief might be deemed unkind.

Sniffling may be caused by sinus problems and sinus-related symptoms which are common reasons why people see their doctors.

Symptoms include pain in the forehead or between the eyes, toothaches, feelings of fullness in the mid-face, stuffy noses and congestion.

Most cases of sinusitis start with the inflammation from a

common cold. This inflammation can lead to bacterial colonisation and cause a bacterial sinus infection.

Of blowing the nose, : "Keeping a handkerchief always at the ready - the old standby for cold management - doesn't really pass the test of modern-day cold prevention."

A bottle of hand sanitizer is recommended.

Of this, Denise Link, a nurse practitioner in Phoenix and governmental affairs officer for the Arizona Nurses Association, is quoted as saying:

“While it might sound a bit extreme, that’s probably not a bad idea."

Blowing your nose is a good way to let mucus out and it is said the best approach is a nostril at a time by blocking the other with a finger and blowing gently into a tissue.

Blowing the nose could also save you days of the infection. : "Keeping this mucus (rather than blowing it out) is

to a cycle of irritation that causes the snotty nose to persist for weeks or longer."

"Thick retained mucus is also more likely to be transported to the throat rather than gravity working it from the nostrils, leading to throat irritation and possibly a cough. This is the

behind the most common cause of prolonged cough after a viral infection or hay fever, known as the post-nasal drip cough."

Staying at home and getting plenty of rest.

Drinking plenty of fluids such as water, juices, broth-based soups and sports drinks. These turn the thick mucus into a thin version that can be coughed up and spit out. Other solutions can be bought from pharmacies or prepared at home. They include warm lemonade and concoctions

of lemon, honey and ginger.

Salt water nose rinsing, which is an effective way to ease congestion and clear viruses and bacteria. Allow a pint of boiled water to cool down until it is warm then dissolve half a teaspoon of salt into it and rinse it into the nose.

You can also use devices such as bulb syringes or just a clean, cupped hand.

Taking care of the sore throat and the cough by taking medicine. Over-the-counter treatments such as expectorants turn mucus into liquid, making it easier for an infected person to get rid of it.

: "Paracetamol helps fever as well as pain, but it doesn’t work as well as ibuprofen for fever control. Humidified air, nasal irrigation and ginseng are all of unclear benefit. Oral zinc as lozenges does appear to be of some benefit. Honey might help but so does chicken soup – especially if made by your mother!"

Minding manners to keep from infecting others. Call in sick if you can because you are sick and very contagious.

Where some need more help than others

Scientific research indicates women know how to control their cold/ flu better than men and the reasons why may have been uncovered, .

"Oestrogen - the female sex hormone - may weaken the flu virus in women.

A virus infects the body by entering a cell and replicating itself - and is then passed on from person to person.

"Although the hormone is found in men and women, the virus’s ability to replicate in women is reduced by oestrogen."

The Express says that according to a study by author and professor Sabra Klein, of Johns Hopkins Bloomberg School of Public Health in Baltimore, "the lesser the replication, the less likely the person suffering from the flu is able to pass it on to others."