I clean the beaches and make cash 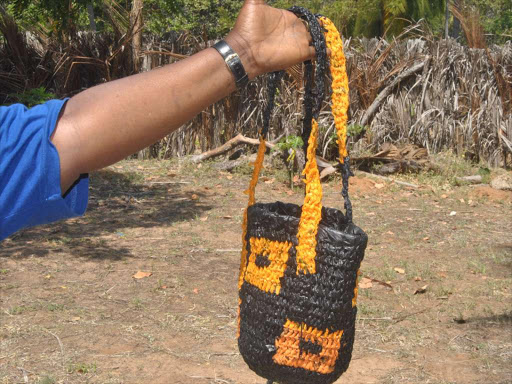 Matilda Mathias Abednego a volunteer member of the blue team under the umbrella of Watamu marine association a conservationist organisation displays a basket made from plastic paper bags at the Watamu Community recycling centre.

To many people, she is a crazy woman who collects plastic bags along beaches and streets of Watamu.

But Matilda Mathias Abednego says she is not only in her proper mind but plays a major role in recycling plastic wastes by turning the trash into cash.

Abednego, a mother of six, works at a church in Watamu in her free time collects the bags and makes colourful Kiondos (basket bags) that are sold at between Sh400 to Sh1000.

In 2009, she volunteered at the Watamu Marine Association (WMA), a conservation group in Malindi.

She first took part in the beach clean-ups before the association set up a recycling plant to create opportunities for the volunteers.

Since there was a variety of debris being collected including rubber, bottles and plastics among others, she decided to set up ladies' shopping baskets as her unique product.

We found her during the official handover of the first

Watamu community recycling plant, one of its kind at the coast. She had displayed baskets made from plastic bags.

To her, anyone carrying plastic bags is carrying

a raw material that can be transformed into an attractive product for resale.

During her free time every day, Abednego joins colleagues from the blue team of WMA on beach walks to search for plastic wastes.

She walks through dumping sites, restaurants, streets, beaches and hotels to get the plastic waste.

“We normally collect these polythene bags and other plastic wastes

from supermarkets, dumping sites and turn them to useful products. As for me, I have specialized in making Kiondos,’’ she says.

If she collects enough polythene bags per day, it is possible for her to make three baskets.

Ms Abednego is just but an example of the over 24 volunteers who not only play a big role in conservation and waste management but have been able to earn a living from solid waste materials.

Most of the volunteers were jobless. Some just housewives who depended solely on their husbands to get food and other needs.

Others are former drug addicts who were absorbed at the recycling centre in 2009.

At the recycling centre, waste products include plastic bottles, rubber, wine bottles, polythene and other debris.

Some of the plastics are usually crushed and transported to Mombasa for sale.

The remaining ones are usually made into different products for hotels along watamu area, who are very supporting in the project.

The group members normally fill the bottles with sand and then set up the wall with cement.

Geoffery Balusi, a member of WMA and former drug addict, says the conservation project has transformed his life.

He says before joining the group life was tough and sometimes idleness could land him into trouble.

“I was just a drug addict and never thought of doing any job, each day I used to hustle to get money to buy drugs, sometimes ending up in police cells,’’ he says.

Justin Kitsao, the WMA chairman, says the community members came together and rolled out a plan of managing solid wastes in Watamu.

“This is a milestone. We intend to make this facility a resource centre for people from all over the country to learn how to manage waste management and make out country environmentally friendly and free from pollution," he said.

The centre has hosted schools, colleges and universities who visit to learn.

Waste management has been a major problem not only in Watamu and Malindi but in all the coast region with debris being dumped carelessly in the beaches.

The plastics are a threat to marine life specifically the turtles, who breed along the shores of the Indian ocean.