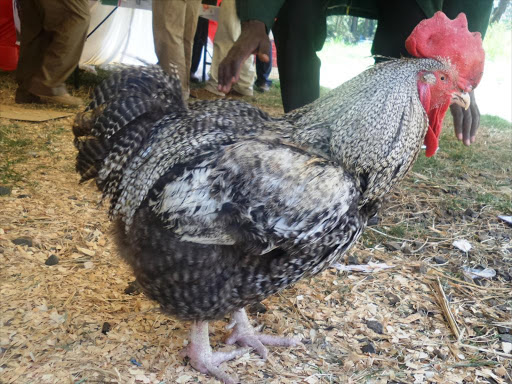 Rainbow rooster of KukuChick ltd breeders in Eldoret. The 11 moths rooster weighs 8.5Kg. It was voted to be heaviest rooster in the 2015 Nairobi International Trade Fair. photo/PATRICK VIDIJA

Many Kenyans are nowadays keen to try their hand in agribusiness.

Expos, shows and field tours provide a platform for those interested to learn more on the potential and risks involved in agribusiness.

Here are a few of the innovations that were a big attraction this year.

This year’s Nairobi International Trade Fair once again proved to be the hub of new innovations and technologies in agribusiness. A rooster weighing eight kilos worth Sh2,000 drew crowds at the trade fair.

This is almost the weight of a dik-dik antelope and twice the size of a normal rooster.

The breed is originally from India.

Koech said such weight is not ideal for natural fertilisation as the rooster might hurt the hen.

He said they do artificial insemination.

“At five months the rooster is ready for the market,” Koech said.

He said they have 20,000 roosters at the Eldoret-based company and sell day-old chicks at Sh100 each. Unfertilised egg costs Sh15.

Since the UK ban on khat in 2014, farmers have suffered great losses since this was one of the largest markets for the stimulant.

The Jomo Kenyatta University of Agriculture and Technology has been conducting research on value addition for miraa so that besides chewing of leaves, consumers can enjoy other by-products like white and red wine, yoghurt, juice and jam.

Kevin Nthiga, a student from JKUAT in the department of food science, said since the tradition market in Europe is no longer viable, some khat farmers have resulted to uprooting the plant and growing other crops.

“It took about four months to research and we are yet to put the products in the market but we have been using ASK shows to display them to the public,” he said.

The university also showcased cactus by-products including wine, juices and yoghurt in different flavours made from the fruit and flour used to make cakes and cookies from the cactus seed.

Weighing in at 1,050kg, a bull heavier than a buffalo was auctioned for Sh600,000, equivalent to the price of a Probox car. However, if slaughtered in the farm, the bull could fetch Sh1 million.

The ‘charolais’ bull was the main attraction during the East Africa Growers Council agribusiness expo in Kabarak University.

The four-year-old bull from Kabarak Farm Ltd only feeds on grass and drinks a minimum of 60 litres of water a day, according to the farm manager Joseph Bett.

Bett says there are about 107,000 of such animals in the farm and a single dose of artificial insemination costs Sh1,000.

The bull was originally bred in France in a place called Charolais, hence its name. It is a naturally horned beef animal.

In Africa, the largest population of the breed is found in South Africa followed by Kenya, mainly in Laikipia.

EAGC chief executive officer Gerald Masila said the livestock section of the agribusiness expo was a big attraction this year.

“There is a big demand for Ayrshires but there is a challenge of sufficient breeders,” he said.

“This year’s focus was on innovations that respond to climate change challenges, that seek to answer issues on the nutrition of people and help in value addition and post harvest reduction,” he said.

The agribusiness expo brought together more than 15,000 farmers, sponsors and exhibitors.

Kenya’s first extensive livestock expo was held this year at the University of Nairobi’s college of agriculture and veterinary sciences. During the event, the portable chopper was the biggest attraction as it is multi-purpose and can be transported easily.

According to Stephen Ndung’u, from Nakuru Tiger Machinery Services, the chopper is used to grind maize, maize cobs and hay, chop nappier grass and maize stalks and can also be used to mix two or more types of food materials.

He says a petrol type chopper costs Sh45,000 while an electric one costs Sh50,000 inclusive of delivery in any part of the country.

“The machinery comes with a one year guarantee and by then the owner is conversant with the machine and can do maintenance,” says Ndung’u.

Gerald Mureithi, the manager, says the meat goes through various processes before it is packaged.

First the meat is sliced into rows, then it is sun dried and after drying, it is cut into small pieces, deep fried and eventually packaged. A 50 gramme packet of dried camel meat costs Sh100.

“When stored at room temperature, the dried camel meat has a shelve life of one month and if stored in the freezer, it can stay for almost three months,” says Mureithi, adding that they also make camel yoghurt.

He says camel milk is pasteurised then starch and sugar is added to it before being innoculated with bacteria culture to help in fermenting.

They sell the camel products to the local market. Mureithi says they now want to venture into supermarkets and other retail markets.

“We receive about 800 to 3,000 or more litres of camel milk daily from our members. Our main market for camel milk is in Eastleigh but during the rainy season when production is high, the market is low and that is why we came up with the value addition,” says Mureithi.

The women cooperative has 29 active members and there are other 91 members who are passive and only supply milk to the active ones.