• Injecting ARV drugs is neither nor beneficial; they do not help the bird's physiology

• However, some farmers use excessive hormone boosters to expedite their growth 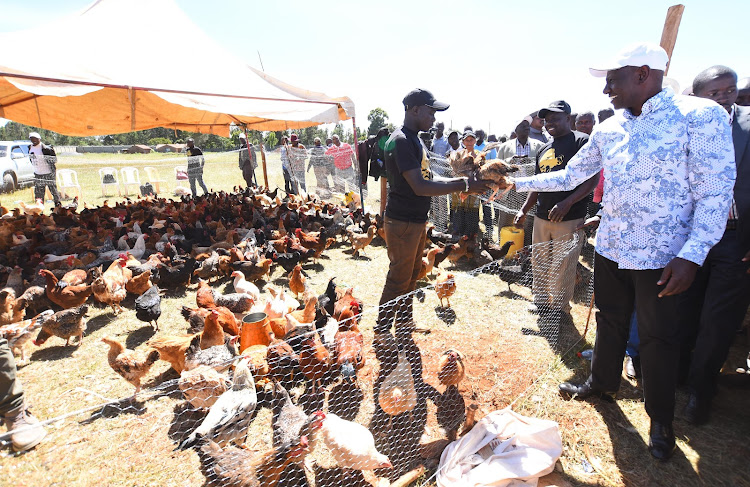 Veterinary experts have rejected the myth that chicken farmers in the country are injecting their birds with ARV drugs to boost their growth and shorten the time of their maturity.

Kelvin Osore, the deputy chief veterinarian at chicken meat company Kenchic, says such a practice is not even possible, given the HIV drugs are solid non-injectibles that are antiviral and hence would be of no help to the chicks.

Osore believes that though there may be some unethical practices by some farmers, injecting their birds with the antiretroviral drugs is not one of them.

“It is just a myth without any basis. There is no way one would have their birds injected with the drugs because even if that were the case, it would add no value,” he said, adding that the ARV drugs configuration does not help the physiology of the birds as the myth suggests.

Osore, however, concedes that some farmers could be using excessive hormone boosters on their chicken to achieve expedited growth.

“It is entirely possible and that is why health experts constantly advise Kenyans to mind what they eat,” he said.

“If you want to eat chicken meat from supermarkets or any vendors, ensure it is a brand that is credible and you are satisfied they put enough care to be ethical in their practices.”

The myth has been pervasive in the country, with purveyors claiming that it was part of the causes of various forms of cancers, whose diagnosis has been rampant in the country.

Juma Bosire, another vet who is an expert in chicken rearing, dismissed the idea that eating meat frozen for a long time has a health impact.

Bosire said as long as the meat is well preserved, eating it as long after 12 months would not impact the health of the consumer adversely.

"You know our people are coming from a set-up where getting proper refrigerating equipment was a privilege. So some of these swirling myths are a result of deprivation and not knowing much," he said.

Why you should buy chicken meat from known brands

We mostly see the kienyeji chickens crammed over the roof of trucks and buses being transported, exposed to harsh sun and weather elements, including dust. The consumer should also consider that

However, broilers are less admired and only mostly heavily consumed in the bustling urban area and cities due to expanding supermarket retail outlets that target the growing middle class.

Kenchic occupies 70 to 75 per cent of the chicken market in the country.

The kienyeji breed is the most trusted due to the belief that it grows in a natural environment, hence free from possible ‘adulterating’ interventions.

But Anton Scheeper, Kenchic’s plant manager for its Thika factory, sees things differently. Scheeper said while he respects the perception about Kienyeji birds, it is unjustified to think they are healthier to eat than broilers.

“We mostly see the kienyeji chickens crammed over the roof of trucks and buses being transported, exposed to harsh sun and weather elements, including dust. The consumer should also consider that,” he said, calling for a mindset shift.

He said unlike the free-handed kienyeji chicken farmers, who do not put enough effort to regard the welfare of their chicken, Kenchic is deliberate in ensuring the chicken that eventually lands on the table of consumers is “not just healthy, but also ethically reared”.

He said the company has contracted farmers who serve as its breeder and who are legally obligated to follow its standard operating procedures (SOPs) in their breeding.

A recent report by World Animal Protection showed that poultry farmers are losing more than Sh24,000 per crop due to poor transportation and poor animal welfare practices on the farm.

The law is an ass? Tell that to donkeys with rights ignored

Cricket meals could be superior to chicken and beef, tests show

They are cheap and easy to rear, are acceptable in Kenya and are highly nutritious
News
11 months ago
by GORDON OSEN News Journalist
Food
29 October 2021 - 04:00