Swift said she was "so honoured to be recognised" at the ceremony.

• The singer won several prizes at the event including the coveted best video, for All Too Well (10-Minute Version).

• Other winners included Billie Eilish and Harry Styles, while Johnny Depp made a pre-recorded appearance. 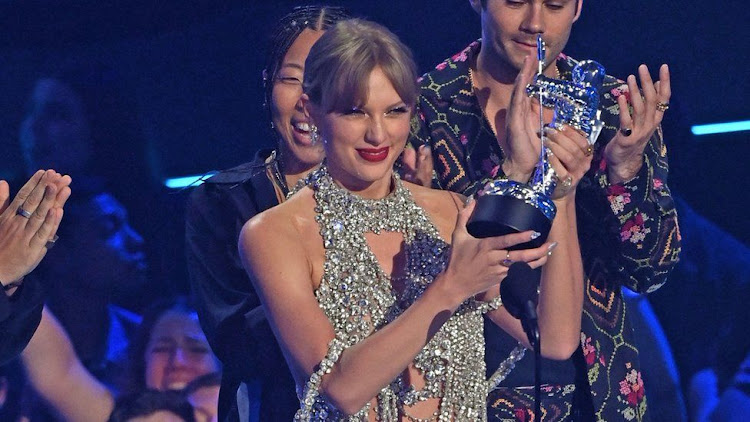 Taylor Swift announced a new album as she scooped the top prize at the MTV Video Music Awards (VMAs) on Sunday.

The singer won several prizes at the event including the coveted best video, for All Too Well (10-Minute Version).

Swift said she was "so honoured" to win the prize, and took the opportunity to tell fans her next album Midnights would be released on 21 October.

Other winners included Billie Eilish and Harry Styles, while Johnny Depp made a pre-recorded appearance.

Here are some of the highlights from Sunday's ceremony.

Swift made her announcement in the final moments of the show, which was hosted by Nicki Minaj, Jack Harlow and LL Cool J.

Accepting the night's top prize, the singer said: "I'm so honoured to have been recognised alongside such amazing artists and directors.

"I'm just so proud of what we made and with every second of this moment and we wouldn't have been able to make this short film if it wasn't for the fans."

She added: "I wouldn't be able to re-record my albums if it wasn't for you... you emboldened me to do that."

Swift is currently re-recording her first five albums in an effort to regain control of her music, following a dispute with music mogul Scooter Braun.

A newly-extended version of All Too Well, the video for which won three VMAs in total, was taken from the re-recorded version of her 2012 album Red.

Swift told the audience: "Because you've been so generous, I thought it might be a fun moment to tell you that my brand new album comes out on October 21."

She later released further details of the album on her Twitter account. Swift described the new album as a "collection of music written in the middle of the night, a journey through terrors and sweet dreams".

The VMA show was sprinkled with digital appearances from actor Johnny Depp, who was projected on to the face of the VMAs' famous Moon Man mascot.

"I needed the work," the actor joked as the ceremony was opened, later adding that he was available for "birthdays, bar mitzvahs, bat mitzvahs, weddings, wakes, anything you need... anything".

It marks the latest move in Depp's gradual return to the spotlight. It was recently announced he will appear in the film Jeanne Du Barry, produced by French company Why Not Productions, which will mark his first starring role since the trial.

He is also set to direct his first feature film in 25 years, about the Italian painter and sculptor Amedeo Modigliani.

Harry Styles was 'just down the road'

British nominees largely lost out to US counterparts at this year's awards, with only Harry Styles taking home a major prize with album of the year.

The 28-year-old apologised to fans for his absence at the show despite being "just down the road" performing at Madison Square Garden in New York.

This year's VMAs took place less than an hour away at the Prudential Centre in Newark, New Jersey.

"I'm sorry I can't be on stage with you tonight, I'm about to go on stage just down the road, but I hope you're having a wonderful evening."

Minaj was the recipient of this year's video vanguard award, which recognises artists who have consistently produced creative and influential music videos.

The US rapper performed a medley of her songs as she made her entrance at the ceremony - including Monster, Super Bass and her current number one hit Super Freaky Girl, which samples the original Rick James classic.

Minaj said she had "never ever written a speech in her life", but went offstage to retrieve her phone to read her notes as she accepted the award from members of her fan club, known as the Barbz.

She thanked key people who inspired "me and my flow" and those who gave her opportunities, naming artists such as Kanye West, Beyonce, Madonna, Britney Spears and Rihanna.

Eminem and Snoop Dogg gave a trippy "metaverse" performance of their collaborative track From The D 2 The LBC.

The rap legends appeared live on a sofa at the awards, with Snoop smoking an enormous joint, before the performance turned animated.

The pair transformed into cartoon versions of themselves as well as projections of Bored Ape NFTs, before returning to the live show for an explosive finale.

The track is the pair's first collaboration in over 20 years, and the performance marks the first time either has played at the VMAs in over a decade.

It is their third public performance together in 2022, with previous appearances including the Super Bowl Halftime Show in February.

The winners in full

Video of the year: Taylor Swift - "All Too Well" (10-minute version) (Taylor's version)

Artist of the year: Bad Bunny

Song of the year: Billie Eilish - Happier Than Ever

Push performance of the year: Seventeen - Rock With You

Best pop: Harry Styles - As It Was

Best hip-hop: Nicki Minaj ft. Lil Baby - Do We Have a Problem?

Best alternative: Måneskin - I Wanna Be Your Slave

Best R&B: The Weeknd - Out of Time

Best cinematography: Harry Styles - As It Was

Group of the year: BTS

The incident occurred at around 03:30 on Saturday local time in the city's entertainment district.
News
5 months ago

This is not the first time the celebrity couple is in the eye of the storm.
Sasa
5 months ago

The feature to be rolled out in the coming months will however allow one audio at a time.
Sasa
5 months ago

Mixed feelings about our new MP