One man’s lover, another man’s suspect

Makini gets all jealous when Sophia gets a love letter

• Invasion of privacy has always been a no-no to Makini, but now he can't help himself 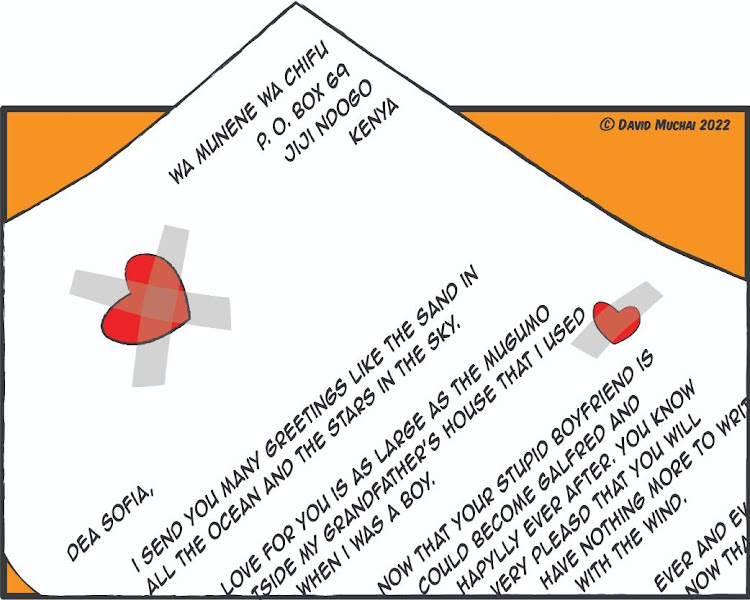 When it comes to matters of the heart, I will gladly confess to being the least knowledgeable of men.

In two and a half decades of walking on God’s green earth, my experience with the opposite sex adds up to a grand total of three. That is, if a six-month relationship marked by constant fights, absurd insults and rolling of eyes counts.

Of all relationship rules, four stand out for me, and I follow them religiously. One, don’t do anything you wouldn’t want her to do. Two, don’t ever cheat. And three, never compare. Women hate this third rule more than they loathe being lied to.

The fourth rule is, never go through her personal stuff, like her phone and mail, but especially her purse. A woman’s purse is a field of landmines that only explode at a man’s touch.

I once read of a husband who went through his wife’s purse only to find a large, scary-powered tool. He decided to confront her about it.

“Why have you been lying to me?” he said, showing the gadget.

“I can explain,” she said, looking scared.

“No need to explain. It’s okay if you work in the construction industry. You don’t have to lie that you’re a teacher.”

Anyway, though I learned my lesson, today I break one of those rules as a matter of necessity. The rule in question is Rule Number Four.

I walk into the house, minding my own business at first, only to find an envelope just inside the door. It’s pink with love hearts and kiss prints. I think, “The water company must really be upping their game. No more bland, blue envelopes.”

Then a few other things begin making no sense. The letter is addressed to my girlfriend in a handwritten colourful cursive font:

“To the love of my life,

Now, any man who loves his woman will be curious about such an envelope, especially if his girlfriend is Sgt Sophia, the most beautiful woman on earth, and the man in question is me, the most insecure man to ever carry a gun.

No, I’m not going to shoot the bastard. I don’t even have a gun since I’m on administrative leave after someone stole my gun and used it in a murder.

“What you got there, loverboy?” she says.

Bingo! She has a knack for going right for the jugular even when she doesn’t know it.

I hand her the letter, feeling like a goat watching knives being sharpened on Christmas Eve.

“This is my letter!” I can see the hurt in her eyes and I wish the world would open up and swallow me whole. “How despicable!”

It’s is from a guy called Wa Munene, the area chief’s son, who’s had the hots for Sophia ever since she came to Jiji Ndogo.

“Oh my God!” Sophia covers her mouth in shock.

I’m referring to one particular line in Wa Munene’s letter, the sentence that might vindicate my invasion of privacy:

“Now with Makini out of the way, you and I are free to love again.”

“Do you think he stole your gun?” Sophia asks.

I say, “Love is the strongest motive known to man.”

Lilian Muli is afraid of a female stalker

Someone has been bullying her online with intimate photos of her car
Sasa
2 years ago
by David Muchai LLB Writer, Author & Content Creator at XLNC Media Inc
Entertainment
26 June 2022 - 06:00