The film is the first spin-off in the franchise, following four Toy Story films between 1995 and 2019

•Lightyear is effectively a Toy Story prequel, with viewers given the necessary context via a title card at the beginning of the film.

•The film is the first spin-off in the franchise, following four Toy Story films between 1995 and 2019 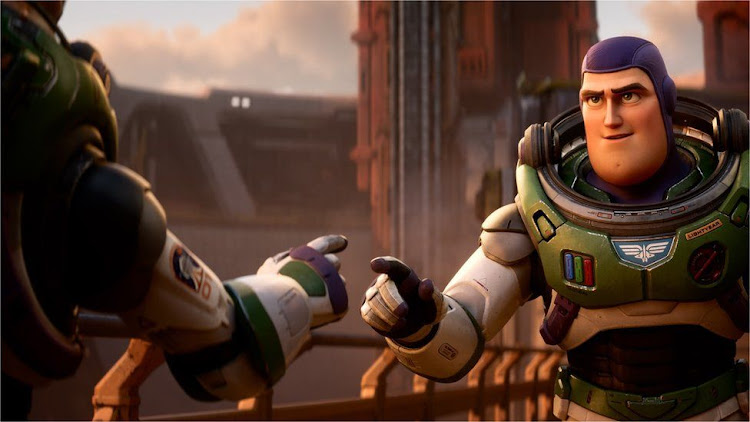 The film is the first spin-off in the franchise, following four Toy Story films between 1995 and 2019

The movie, which is an origin story for Buzz Lightyear, features the voices of Keke Palmer, Taika Waititi and Chris Evans as the titular space ranger.

Some critics praised the film, with the Guardian describing it as a "cracking origin story" in a four-star review.

But the Telegraph said the film was "woefully half-baked" - and awarded it just one star.

Lightyear is effectively a Toy Story prequel, with viewers given the necessary context via a title card at the beginning of the film.

It reads: "In 1995, a boy called Andy got a Buzz Lightyear toy for his birthday. It was from his favourite movie. This is that movie."

The film then sees Buzz, together with a gang of aspiring space rangers, try to find a way back home after becoming marooned on a hostile planet millions of light-years from Earth.

The concept differs from Toy Story in that it tells the story of the original Buzz Lightyear character, as opposed to the Tim Allen-voiced toy version which featured alongside Woody and Mr Potato Head in Pixar's film series.

"Lightyear is a treat," said The Guardian's Peter Bradshaw, "a time-travelling, space-ranging, animated adventure in the spirit of classic sci-fi.

"It might not precisely be up there with the very creamiest of the Pixar crop but it reminds you why we loved Pixar in the first place: wit, fun, storytelling and heart."

But the Telegraph's Robbie Collin felt the opposite, awarding Lightyear just one star and describing it as a "screaming threadbare brand extension exercise".

"The problem with Pixar's latest feature isn't just that it's the animation house's dullest, dreariest, most spiritually empty to date. It's that it fails even on its own painstakingly contrived open-goal terms."

Jake Coyle of the Associated Press agreed, describing Lightyear as "a dead-end wrong turn in the usually boundless Pixar universe".

"There is a bland, vaguely [Cars spin-off] 'Planes' feeling here that smacks of a straight-to-video spin-off," he said. "Buzz, himself, is a bit of a bore, too."

In a three-star review, Empire's Sophie Butcher said: "There's certainly some enjoyment to be had here, but the film is weighed down by genericness and loyalty to the existing IP."

Butcher said she felt the film "comes up short against fully original, specific-yet-universal Pixar output like Turning Red, Coco or Inside Out.

"Though the underlying themes of teamwork, family and leadership are nicely played, they're also fairly surface-level - never quite reaching the heights of infinity, nor beyond."

Kevin Maher of the Times said Lightyear was "firmly in the shadow of Toy Story", and also awarded it three stars.

"It's a generic sci-fi spin-off, with the space ranger protagonist Buzz Lightyear now voiced by Captain America himself, Chris Evans, with none of the sly self-awareness that the original star Tim Allen brought to the gig," he wrote.

Awarding the film two stars, Nicholas Barber of BBC Culture said he felt the script was weaker than some of the animation studio's other films.

"Bear in mind that this is a Pixar film, so of course the animation is hard to fault, and of course it has some ambitious philosophical concepts," he wrote. "But considering how proud the studio is of its engaging characters and machine-tooled storytelling, it's amazing that Lightyear has such an obviously sloppy screenplay.

"The story is thin, repetitive, and almost entirely dependent on the heroes being clumsy."

Variety's Owen Glieberman said Lightyear was "diverting enough, but doesn't give you a Buzz".

Deadline's Valery Complex was more positive, writing: "The animation is gorgeous and hyper-realistic. Children will go nuts for this expansive three-dimensional world featuring one of the most beloved and well-known Disney heroes."

According to the Hollywood Reporter's David Rooney said the "textured visuals are often breathtaking, pulsing with luminous colour, and the detailed character work is delightful, matched by strong contributions from the voice actors".

So far, Lightyear has been banned from cinemas in 14 countries including the United Arab Emirates, Malaysia, Kuwait, Egypt, Lebanon, Indonesia and Saudi Arabia.

The censorship is thought to be because the film contains a same-sex kiss between two supporting characters, but not every country has explicitly confirmed that is the reason.

The UAE's Media Regulatory Office said only that the film was in "violation of the country's media content standards".

In Singapore, the film was given an NC16 rating - meaning viewers must be aged 16 or over to view it - due to "overt homosexual depictions".

In the UK, the film is released on Friday, and is the latest in a long line of summer blockbusters including Top Gun: Maverick, Jurassic World Dominion and Elvis.

Concluding his review, Bradshaw said: "Now surely we need Pixar to give us a heart-rending Revolutionary-Road-style drama about the early married life of Mr and Mrs Potato Head."

His virtuosity is matched only by his range, from music to media, culture, business, and philanthropy.
Sasa
1 week ago

These movies had us laughing from the word go!
Sasa
1 week ago

Lung’aho is looking for more diverse roles that will push him even further away from his comfort zone.
Sasa
1 week ago

Experts agree that taking advantage of sunlight during the day by going for walks or sun bathing.
Sasa
1 week ago

Spinach pancakes are wholesome and completely guilt-free.
Sasa
1 week ago

They are like emoji’s and can convey emotions without needing to type words.
Sasa
1 week ago
by BBC NEWS None
Entertainment
14 June 2022 - 15:46