• Few things are as fulfilling as closure, however unflattering the outcome of the search 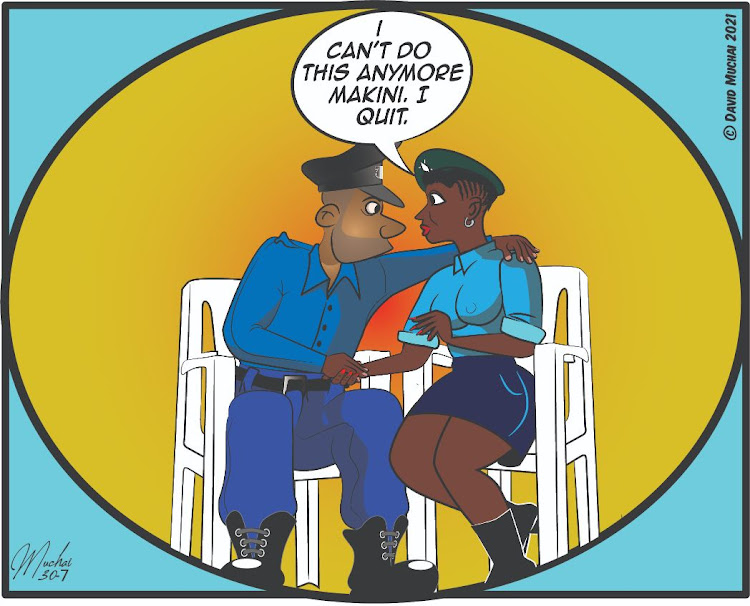 My dear reader, more drama has unfolded in Kipipiri than anything I’ve encountered in Jiji Ndogo. First, my boss Inspector Tembo discovered his departed wife had a twin sister living in America.

Then, my colleague Sgt Sophia confronted her mother about her biological father. For a while, we had suspected it might be Inspector Tembo. Finally, Sophia’s mother admits that indeed, it is true.

Tembo is elated. “This is incredible. I lose my wife, but I gain a sister-in-law and a daughter.”

“She’s not your daughter.” Mrs Kali, Sophia’s mother, steps between Sophia and Tembo. “You’re nothing but a sperm donor.”

“I was only a kid. You got me stupid drunk so you could sleep with me. If anything, that makes you a sperm robber.”

“Oh yeah? I didn’t hear you complain once.”

Tembo wags a finger at her. “You know what, you’re right. I’ll sue your ass.”

“For custody of my daughter.”

Sophia swings towards the door. “I can’t take any more of this.”

I follow her outside. “Sophia, wait. I know all this is too much to handle in one sitting, but you should be relieved. You’ve spent your whole life searching for your father.”

She flops into one of the chairs under a tent, looking tired and defeated. “I don’t know what to do.”

“I thought you’d be happy. I know when you cast that net you wished to snag a better catch than Inspector Tembo, but…”

“It’s not him. It didn’t matter if he was the president or a bum living under Thika highway. I just wanted to know…”

“I just wanted to know why he didn’t want me.” She broke down, tears pouring out of her eyes. “Now I know it was all mother’s doing.”

I pull a seat next to her, put an arm around her and her head on my shoulder. She feels so small, so vulnerable. Nothing like the tough Sgt Sophia I have come to know and admire.

“I don’t know what to tell you. I’m not very good at this stuff, you know. Maybe I should Google ‘Words to comfort a friend who just discovered Inspector Tembo is her real father.’ I had to Google what to say to Tembo when his wife got sick. And again after she died.”

“Oh, no!” I almost slap myself. “I didn’t mean to make it worse. I swear I was only being honest.”

She lifts her head off my shoulder, turns wet eyes to me. She is not crying. She is laughing through her tears. She holds my face in her hands, looks me deep in my eyes before kissing me long and hard in the mouth. “Sgt Makini, you said exactly what I needed to hear.”

She takes my hands in hers. “Makini, I’ve always been tough. I had to be, growing up as I did under a very domineering mother, with no sibling or a father. Suddenly, I feel like I don’t have to be that person anymore. I’m not alone and I don’t have to do this.”

She takes off her official police hat, lays it on my lap. “I’m free, Makini. No need to play the tough cop any longer. I quit.”