Makini’s sister ruins it for him with Sophia 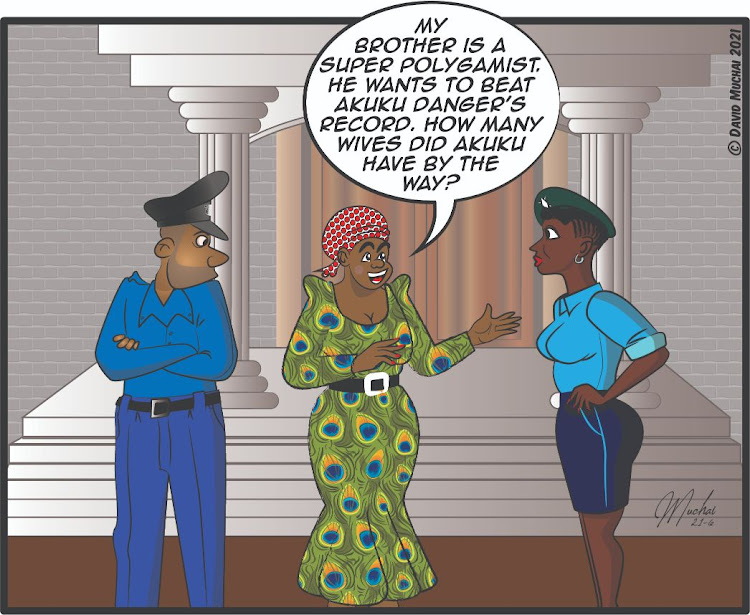 Kimondo the rapist’s plea hearing is up in Kericho. I go there to support my sister Kanini. Surprisingly, Sgt Sophia offers to accompany me, although it will mean leaving Jiji Ndogo Police Post unmanned. I guess she’s softening up after all.

We get there early and I introduce Sophia to my sister.

“Hello, Kanini,” Sophia shakes the other woman’s hand. “I’ve heard a lot about you from your brother.”

“And I about you,” Kanini says. “So, Makini, this is the woman you’ve been raving about, huh?”

“You’ve been raving about me?” Sophia asks.

“Yes,” I say, buying time. “I keep telling my family how good a police officer you are. How much of a pleasure it is to work with you.”

“Oh, he wants pleasure, alright,” Kanini nods. “But I doubt it’s from ‘working’ with you. And you’re right, Makini. She’s prettier than Wandia. I don’t know what you see in that village girl.”

Sophia gives me a look that could melt stone. “Wandia? This is news to me. Pray tell me more, Makini.”

“There’s nothing to tell. She was my primary school crush. I haven’t even seen her in ages. And Kanini, village girl? Isn’t that the kettle calling the pot black?”

Kanini whispers to Sophia, “He’s trying to change the topic, but what he really means is he couldn’t locate her the last time he came back home. He even did that… what do you call it? An All-Points-Warning thingy?”

Sophia’s eyes nearly pop out of her skull. “You issued an APW on a civilian?”

“I don’t even know how she knows about that. Kanini! Are you determined to ruin things completely between me and Sophia?”

“What things?” Sophia shoots. “You have Wandia. How many more women do you want?”

“My brother is a super polygamist. He wants to beat Akuku Danger’s record. How many wives did Akuku have by the way?”

“Yes! He had to build two schools and a church to fit everyone. Makini wants three schools, a church and a mosque.”

“Three schools?” Sophia holds her arms akimbo. “Exactly how many children are you planning on having, Makini?”

“Sophia, you can’t be taking all this seriously, are you?”

“Did I tell you my sister once spent a stint at Mathare hospital?”

Sophia turns to Kanini. “She did?”

“Mental instability.” I nod pensively. “For six good months, she thought she was The Bride in Kill Bill. She wore that yellow Bruce Lee tracksuit and chased everyone around the village with a sword.”

“A sword?” Kanini rolls her eyes. “Where did I get a sword in Kite village?”

“I was only trying to make it sound better. It was a broomstick.”

“It runs in the family,” says Kanini. “If you ever hear him say, ‘Go ahead. Make my day, punk,’ then you know he thinks he’s Clint Eastwood in Dirty Harry.”

“I’ll make a note of that,” Sophia says, seriously.

The court clerk announces the judge is coming. We all stand.