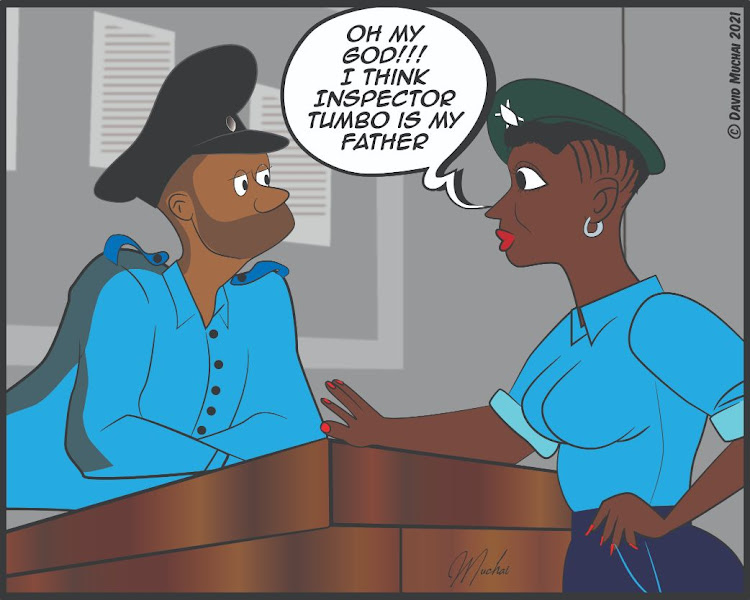 With Inspector Tembo still in the city by his sick wife’s bed, Sgt Sophia and I man the Police Post. Today she’s especially bubbly for no particular reason I can fathom.

“The last time you were this gay, you had a date,” I tell her.

She gives me a side-eyed glance, though she’s smiling.

“Did you use the word ‘gay’ thinking you’ll irritate me? Not today, dude. I’m too buoyant for your evil wind to bring down.”

“So, no date? I was so ready to guess who the lucky guy was.”

She bites the pen she’s been writing with.

“I’ll play this little game of yours,” she says. “Who do you think is the lucky guy, Sgt Makini?”

“The village madman?” She throws the pen at me. “Shame on you, Makini. But on second thought, I’d choose Kichaa over you any day.”

The rest of the day goes on without a hitch. Sophia still as happy as a pig in a private mud pit. In the evening, she drops the first bomb of the day.

Promptly at eight at night, I’m at her place. The spaghetti is finger-licking delicious.

“Date? You call this a date? I only invited a colleague to dinner, that’s all.”

“Inspector Tembo’s wife only spilled soup on him. They’ve been married for 25 years.”

I narrate how our boss had met his wife at a police conference in Naivasha. He was the policeman, she was a waiter. At the end, Sophia is shedding tears of joy.

“That’s such a romantic story.”

“That’s what I thought. Nothing like the night before when a woman had raped the Inspector.”

“Now, what are you talking about?”

I tell her how on the first day of the conference, a woman superintendent who was hot for Tembo had fed him alcohol and taken him to her room, where he had woken up naked at three o’clock in the morning.

“Jesus wept!” Sophia looks like she’s been hit by a bus. “I hope he reported her sorry bum.”

Suddenly, Sophia shoots to her feet. She holds her chin in her hand as she paces about.

“Yeah. And don’t you dare say you were at the conference.”

“And you said the woman was a superintendent?”

“I don’t like your tone. Too serious. It was only a story Inspector Tembo shared with me. Can we go back to the former lively you, and this super delectable spaghetti?”

“Today? It’s your birthday. Oh, crap!” I almost kick myself. “I had no idea. Happy birthday. I’ll get you a belated present tomorrow.”

She throws a napkin at me.

“It’s not my birthday, moron.”

“What is it then? Is it something I did? Or said?”

Sophia plants her hands on the table, glowers at me.

“Makini, 25 years ago, I was born. And guess what? My mother was a police superintendent!”

“My mother claims not to know my father. Oh my God! Inspector Tembo might be my father!”