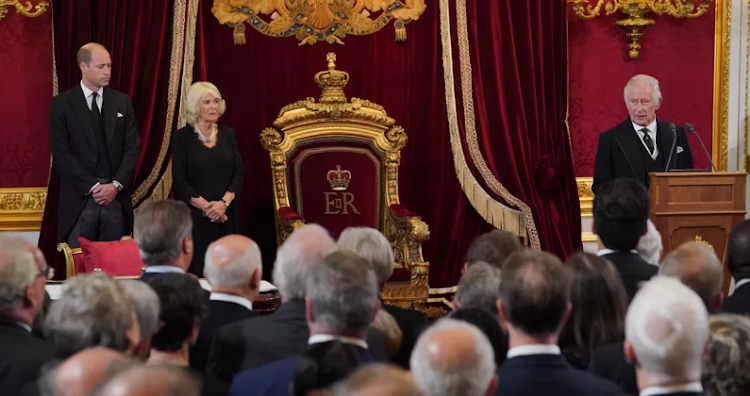 The Accession Council was attended by the King and Prince of Wales
Image: PA MEDIA

Several things happened in 1979 to the best of my knowledge. This is the year the new King of England, Charles the 3rd, turned 31. It is the same year that the new President of Kenya, William Ruto, turned 13.

In 1979, I was not left behind, I was born. Sharing the same birth year with me is the most famous play by Kenya’s foremost playwright, the late Francis Imbuga, who taught me Theatre and Creative Arts at Kenyatta University a quarter a century ago. Imbuga’s play called The Successor was first published on the first day of the first month of 1979.

It remains one of the eloquent commentaries on the politics of succession in postcolonial states in Africa. It makes a general commentary about the virtues and vices that accompany leadership struggles and transitions in modern times. Whereas patience is extolled, greed is mocked.

The play was staged in memorium in 2018 by Kenyatta University, years after Imbuga died. The relevance was still obvious as Kenya ushered in the second and final term of President Uhuru Kenyatta.

Back then, it was kind of clear that after his second and final term, our president would be succeeded by his deputy. However, as we proceeded beyond 2018, our succession politics took twists and turns.

Whereas Uhuru’s deputy, William Ruto, was the second in the line of succession, it became increasingly clear that it was not going to be a direct line of succession come the end of Uhuru’s tenure. The President would later side-step his deputy and point at the leader of the opposition, Raila Odinga, a former Premier, as his preferred successor.

Kenya is a republic based on democracy rather than a kingdom, and ultimately depends on the ballot for selection of presidential successors. It is not the case in England, where the death of a sovereign automatically qualifies the second in the line of succession to sit on the throne.

The sudden demise of 97-year old Queen Elizabeth naturally set the ground for the ascension to the throne by her eldest son Prince Charles of Wales. It was immediate and swift, his change of fortunes and titles. As September started, Charles was a Prince, but it will end with him having taken up his place as the newest King on earth after King Misuzulu of South Africa.

There have been other two Charles who reigned as kings of England in the 17th Century. One was the child of the other and both hailed from the dynasty known as the House of Stuarts. King Charles 1 reigned between 1625 and 1649. His son King Charles 2 ruled between 1649 and 1685.

It is normal for the sovereigns of England to see their own kingship as embedded in the history of those who ruled before them. This explains why Charles of today though from the House of Windsor in terms of dynastical origins, identifies himself as the third in the long line of those who have sat on the throne of England.

It goes without saying that William, the new Prince of Wales, will succeed his father, the new King. If he chooses to retain his name William for the Kingship, he will become King William the 5th.

This is because the last King by that name was King William the 4th, who ruled between 1830 and 1837. It is this William from whom the throne of England moved to the famous Queen Victoria of the 19th Century.

Back to Kenya, the line of succession has moved from President Kenyatta to another William from Eldoret in the former White Highlands of colonial times. Although the wishes of the retired leader were for the presidency to go to scenic Lake Victoria through Raila Odinga, this did not come to pass.

On Tuesday, William was sworn in as the 5th Kenyan President. His deputy is Rigathi Gachagua of Nyeri. Will he automatically become the successor of the Kenyan William the 5th?

Only time will tell. But if the recent history is anything to go by, Gachagua, a keen student of literature at the University of Nairobi of the 1980s, will re-read Imbuga’s The Successor. His background as a student of political science and literature in the apex varsity in Kenya gives him valuable insights.

It may be too early for him to start planning about the future politics of succession. If one considers the pattern of presidential tenures since the turn of the century here, it is clear that 10 years forms the bracket of time for both President Mwai Kibaki and President Uhuru Kenyatta. Dr William Ruto, our fifth leader, may not deviate from this trend.

This means it will be a decade probably before Rigathi makes a stab at the presidency. He will be aware that the line of succession in Kenya’s Head of State office is not guaranteed like that of England.

He will find comfort in lessons of politics, literature and history of his motherland that, if learned well and moved from theory to practice with careful calculation, may just earn him the ultimate price of political careers.

Is Kenya more democratic than the UK?
Post a comment
WATCH: The latest videos from the Star
by Justus Kizito Siboe Makokha Books/Plays Reviewer
Books
17 September 2022 - 05:00
Read The E-Paper