Musings on a boat ride in Nairobi 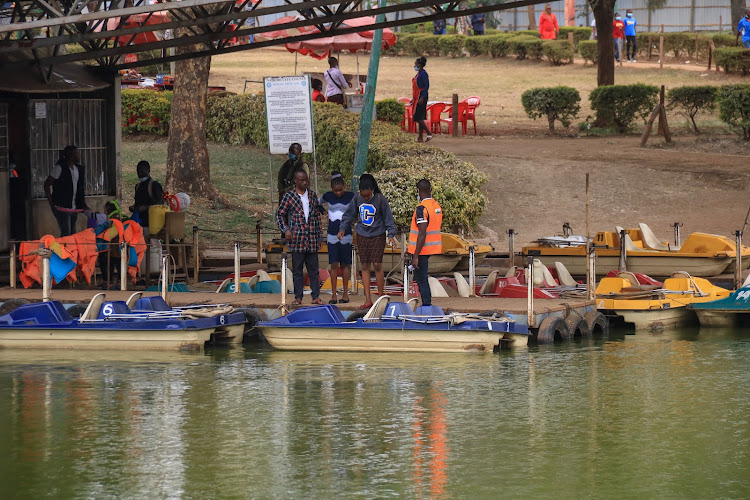 The boat bobs up and down on the river of June. It resembles those ones for hire you see in the small brown lake in Nairobi’s Uhuru Park. There is on one side of it the ancient Egyptian sign of life. The other side of the boat near the stern has a pair of... eyeballs.

They look like normal eyes but without spectacles. The pupils are Kenyan alright, but there is a problem. They appear to throb with each stare that you make. As your eyes engage the boat eyes, it is common to feel the pulse on your temples drum away as a migraine throb.

The problem lies in the throb. It does not fade. It does not go. It is constant. It is dull. It is there. At the front of the socket. Yeah, where the balls are located. The place where the two enter coitus. The throb.

The pillow where your brain rests suddenly forms a dent. It does so as your eyes keep the stare but your thoughts adjust. The back of the brain is now bent with a kind of ache. The body that yours is develops a state of unease.

What creates droplets measuring Time from the skies of mosquito nets to the very veins that support Life, here. They come and go. They go and come. They peer into the luminous light that is a halo before her veiled eyes.

They throb with it. Fading and receding, emerging and arriving. One sees things in a squarely fashion, rhombus cartoons zigzagging in a rotational cuboid that is upside down. The bed creaks with heavy silence. Welcome to Cartoonistan.

There were times when imagined insects scoured the plains of the ceiling, acre after acre, hectare after hectare all zwooooshed into the coplacutorial berescete of monsglfligate caopjhdlings. You see we throb in and out. Words with meanings; others without…. Poll words.

We throb here and there. We throb in woman as we woo Man. We do so we do. Woman at the epicentre of penumbra. Dusk-inviting khangas to flippant choruses of echoes. The boat finds the tide gentle on its side and the albatross cries to the formed night whose yolk is a yellow full moon.

Of voices with will against intellectuals ohne Willen. Oui. You hear chants of pre-electoral disputes as academic papers become objects of interest. Spy networks zoom and googlemeet in order to make sense of intellectualism. Papers gain value that mock mere words.

We crush into pestles the mortars themselves. Peeping from broken eyeballs made of fake China. The incense burning now in the temples of Thought coil into supplication as fingers of smoke. The boat of Thought bobs up and down on the River of Time.

Time becomes a kaleidoscopic interplay between songs of Today is Today. Has it ever been Yesterday or even anything else? Questions litter the atmosphere of here. Guano from the circling denizens of the air find the bullseye on the twitching nose of a retiring leader.

The wall that winds its distance is the wind itself. It separates political ideologies into the pseudo-Left and the quasi-right. Loudspeakers on mounted SUVs call all to the mosques of imagined prosperities. A dragonfly mates with another. Soon after the enjoyment they bite off each other’s heads!

The wind now whines as it forms a road. It is on this that the decapitated insects find a journey to their absence. They were here one moment, mating. Now they are here no more, death. How different are the slogans of popular politicians buying popular media airtime to pontificate about prosperity?

The month of July promises a cold bout and it is clear that these throbs will sire throbs. Hobbits to elves and ogres to oysters, the Tide sings as it sway-sways the boat of Thought on the river of Time. Rhythm becomes that of the heartbeat of a Nation in a state of consternation.

When it is all said and done, the jumbo flag will fly yet above the major garden of Nairobi. Someone will pay for a young one to do a boat ride. It will be the boat in the brown lake near the dais of Uhuru. Here, a president handed over power to a president and euphoria reached Europe as cacophony.

Here the name of a leader staring at his exit, exists as the name of this old garden of Independence and boats for hire. His name now is that of the new Garden in Lang’ata. The histories of his legacy and his name mingle with the words gathered here to form a rainbow.

What are the meaning of all of its colours? The storks of Nairobi nestle on acacias next to Parliament. They drop guano near the Holy Basilica. Their thoughts are all these words in the world collected into their permanent stare at the mausoleum of the Father of the Nation.