OUT OF COURT SETTELMENT

KFCB boss says comedian wants an out of court settlement.

• KFCB boss Ezekiel Mutua said Saturday the apology can be taken if and when he pulls down the said videos from his social media platforms.

• He gave Omondi up to Monday, March 15 to do so or else they meet in court. 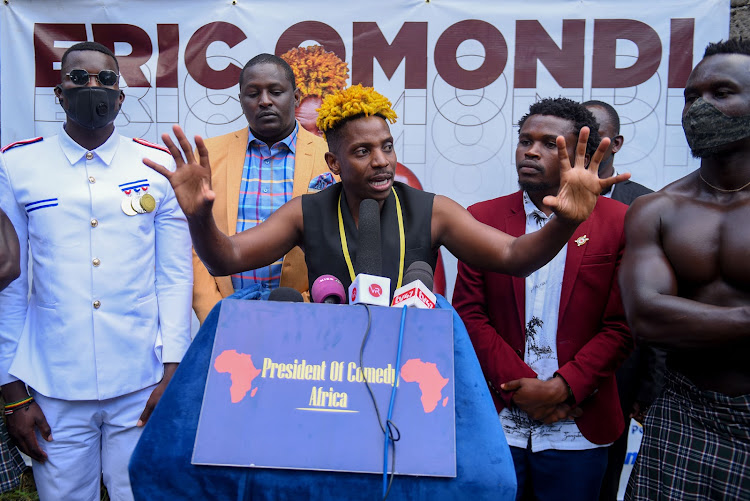 Comedian Eric Omondi has apologized to the Kenya Film Classification Board (KFCB) over his explicit videos and wants an out of court settlement.

KFCB boss Ezekiel Mutua said Saturday the apology can be taken if and when he pulls down the said videos from his social media platforms.

He gave Omondi up to Monday, March 15 to do so or else they meet in court.

“We received an apology and request from Eric Omondi for an out of court settlement of the case against him, but apparently the explicit videos are still circulating on his social media platforms,” Mutua said in a tweet.

Eric took to his social media account on Saturday confirming he had apologised to KFCB over his content.

"I have apologised to KFCB and the general public because I realized that some of the scenes from #WifeMaterial2 were very offensive and unnecessarily obscene, I talked to Daktari and we agreed that Content doesn't have to be dirty to sell and moving forward I promised to steer clear from that," Omondi said.

"I have owned up to my mistakes and apologised but I don't want my mistakes to be used to punish an entire industry."

The comedian said he will meet the KFCB team on Monday morning to start the conversation.

"I pray for a handshake and that's what my big brother Dr Ezekiel Mutua has promised and I have also promised to ensure for clean content only. In fact, I am willing to be the Ambassador of Clean Content. But my prayer is that we dont use this unfortunate setback to stifle or kill creativity amongst artists," he said.

Omondi and his 15 'Wife Material' show contestants were on Friday freed from Central Police cells in Nairobi pending arraignment.

Omondi and the contestants were all freed on Sh50,000 police bond but will appear in court on Thursday, March 18, to face charges over alleged participation in the production of “dirty content.”

Nairobi Central Division police boss Mark Wanjala confirmed Omondi and others’ release from their custody on a Sh50,000 bond each.

“They will take plea later,” he said.

Mutua said he ordered their arrest for violating provisions of the Films and Stage Plays Act Cap 222 of the Laws of Kenya.

“No film or class of film shall be distributed, exhibited, or broadcast, either publicly or privately, unless the Board has examined it and issued a certificate of approval in respect thereof,” says the Film Board’s Plays Act.

On Friday morning, the KFCB boss took to his Facebook account to inform the public that his directive for the arrest and charging of Omondi is not meant to stifle creativity.

“The war is not against artistes or the youth. It’s against dirty content. The intention is not to harass artistes or stifle creativity. The idea is to promote clean content and protect children against exposure to adult content!” said Mutua.

Authorities seized the comedian on Mombasa Road with a search within Kilimani estate leading to the arrest of at least 15 of the show’s female participants.

Police drove them to the Directorate of Criminal Investigations offices in Central Division, Nairobi for interrogation.