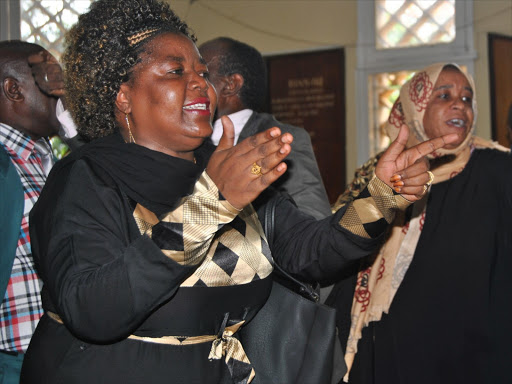 Arafa Baya Salim was dedicated in the struggle to protect the mangrove ecosystem that was endangered due to destruction by the communities surrounding the area.

Ms Salim a founder member of Mida Creek awareness and conservation group has worked with many environmental organization to sensitize the community on the importance of conserving the forest.

Her efforts not only earned her national recognition but has made impact to the community of Mida where she was born and brought up.

Currently hundreds of tourists visit the Mida creek to enjoy the natural ecosystem , a unique boardwalk that offers a chance for revelers to witness unique birds species found only in the area.

Due to her expertise and influence she earned herself a nomination in the new devolved government and is serving as a member of the county assembly of Kilifi.

Apart from environment she is using her skills acquired from Kilifi Institute of Agriculture (now Pwani university) where she specialized in farming to empower the community.

The idea was to use the project to teach community groups and individuals on how to start a small scale farming that could uplift the standards of living.

To her the conservation groups which normally got funds fro Non Governmental organization usually collapse immediately after the end of the project leaving the locals to suffer.

Many of the locals live desperate lives not because they cannot change but due to lack of proper guidance on what can be done to change their lives.

With only capital of Sh. 30,000 She says one can start the agro farming business of rearing 100 chicks which are sold at Sh. 800 each after merely three months.

As an example she set up structures using the local available resources to cut costs and bought her first batch of 300 chicks.

Today Ms Baya has over 850 chicken that are doing well and sold on rotational basis depending on their maturity time.

Despite her busy schedule as MCA that consumes a lot of time she manages to handle the project and at the same time deliver her legislative duties.

Every day she wakes up at 5.30 am and after prayers goes to every cage of chicken with different species to monitor their development.

“In each cage I take between 30 to 40 minutes , to check the dullness of every chicken,’’ she says.

and croilers which are found at the different cages.

She says the broilers are delicate with many diseases while the croilers are good as it’s disease resistant.

The kembro she says take up to two and a half months to mature and sells at Sh. 600.

Since there is no electricity in Mida she uses solar power and hurricane lamp as young chicks require lighting in their growth.

To her she initiated the project not as an MCA but as a role model to the community to enlighten the locals to come up with such initiative and transform their lives.

Normally she offers free training to different groups, individuals and even schools on how to come up with the project.

The main challenge however she is facing is how to market the chicken to potential clients.

Due to the scarcity of stable market Arafa normally gives youth the chicken to sell by the roadside at a commission of Sh. 50.

The Standard prize is Sh. 600 but one can sell at any price higher than that depending on the client.

The MCA says she lives in a community with high poverty levels and has learnt that many people particularly the youths do not like long term projects.

“Youths want quick income generating activities unlike women who are patient and can wait for a long term development projects,’’ she says.

MS Baya says most youths groups have collapsed because they take long for the beneficiaries to start ripping fruits.

In Kilifi County at large she believes such a project can change lives and help address famine and the high poverty levels.

The notion of farmers relying on maize during rainy season she says has contributed a lot to the famine.

“It’s not a must for use to plant maize or go fishing, we can look for projects that can empower the people and create change,’’ she adds.

She believes it’s time for county government to embrace such initiatives and help to transform lives instead of spending a lot of money on foreign trips which are costly.

Some of the knowledge acquired from foreign trips she said are difficult to embrace because of the different lifestyle and weather conditions.

Kilifi County has many challenges. Apart from poverty each year thousands of residents suffer from hunger particularly due to drought.

The traditional farming being practiced in the county is also not sustainable due to over reliance in planting maize which no longer do well.