The career diplomat took over the reins of the ministry in 2019 and worked hard to gain the trust of sports stakeholders.

• Welcoming her successor Ababu Namwamba to the office during a handover ceremony held at the Kenya National Service in Nairobi last Friday, Amina said she found the ministry in turmoil but somehow managed to weather the storm.

• We thank her for all her efforts to revive sports in the country. However, she has left the new Minister Ababu Namwamba with the difficult and inevitable task of resolving the impasse between the government and the world football federation, Fifa. 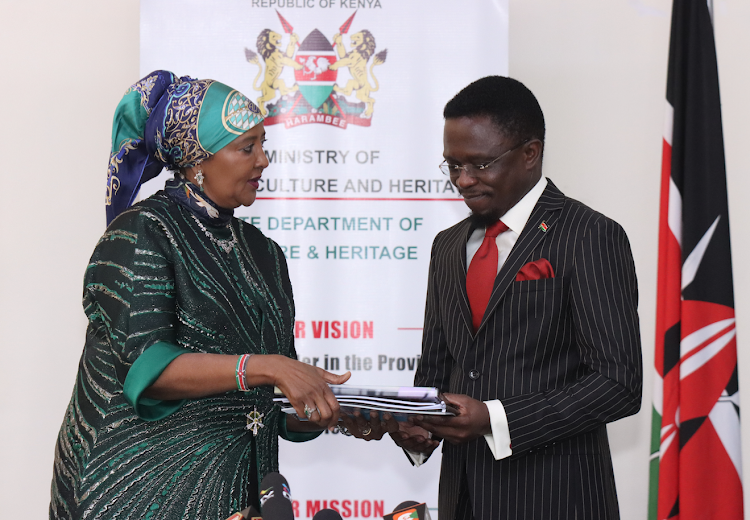 Finally, Ambassador Amina Mohamed has left the Ministry of Sports, leaving behind an impressive three-year legacy.

While it would be wise to allow the entire country to evaluate her performance, let me identify and highlight her excellent scorecard as cabinet secretary.

The career diplomat took charge of the ministry in 2019 and worked hard to win the trust of cynical sports stakeholders, who were accustomed to endless theatrics.

Welcoming her successor Ababu Namwamba to the office during a handover ceremony held at the Kenya National Library Service in Nairobi last Friday, Amina said she found the ministry in turmoil but somehow managed to weather the storm.

“As I walked into the Ministry, the corridors were lined up with disgruntled athletes including the Paralympics team that struggled to get funding, missed competitions, and got stranded at airports,” Amina said.

Amina talked about inheriting dilapidated infrastructure, dealing with cases of protesting sportsmen and women and, surprisingly, discovered that some institutions including the Kenya Sports Academy existed only on paper.

When she took over, only a few international events had been organised in the country.

“To move from where we were to having a Ministry that is respected, admired and held in high esteem has been a transformative journey,” Amina reckons.

Amina says she is now leaving the scene completely satisfied after overseeing the construction and rehabilitation of several stadiums including Kirigiti, Kinoru, Chuka, Narok and Jomo Kenyatta Stadium in Kisumu.

Her team also managed to upgrade the Nyayo and Kasarani facilities to modern standards, in addition to the Jamhuri Sports Ground which was given a thorough facelift as a sports and recreational centre.

She also pressed for the federations' compliance with the Sports Act and successfully protected the Railway and Naivasha Golf Courses from land grabbers.

She is also vividly remembered for successfully negotiating the return of the WRC Safari Rally - with the 2021 and 2022 editions breaking the world record as the most-watched series.

Amina's office also increased the presence of Kenyan teams on the international stage by facilitating their trips to major international events.

She created committees of experts and stakeholders to streamline operations and management in federations such as Cricket Kenya, Football Kenya Federation and the Kenya Deaf Sports Federation.

This was done in a frantic effort to strengthen governance, accountability, transparency, and integrity in the troubled federations.

During this time, Kenya has grown as a sports hub with many options for international sports.

Finally, she took bold steps to spare Kenyan athletes from the pain of the Covid-19 pandemic through financial support.

Amina said the journey has been difficult, time-consuming, and resource-intensive, but worth the time.

We thank her for all her efforts to revive sports in the country. The only blot in her glittering CV is the unresolved impasse between the government and the world football governing body, Fifa.

Hopefully, a solution to the deadlock will be found soon. Meanwhile, we wish Amina Mohamed all the best in her future endeavours.

Otieno said they would ensure a return to normalcy in the event that they are cleared to regain control of the country's football.
Sports
1 month ago

Former CsS Amina said she had overseen the development of key infrastructure including the construction of sports facilities.
Sports
1 month ago
Post a comment
WATCH: The latest videos from the Star
by TONY MBALLA
Star Blogs
02 November 2022 - 05:00
Read The E-Paper