One notable transformation is the removal of the second biggest garbage dump in Kenya, Kachok dumpsite.

• When he assumed office, Governor Nyong’o described Kisumu as a county of great potential but a disappointing underachiever 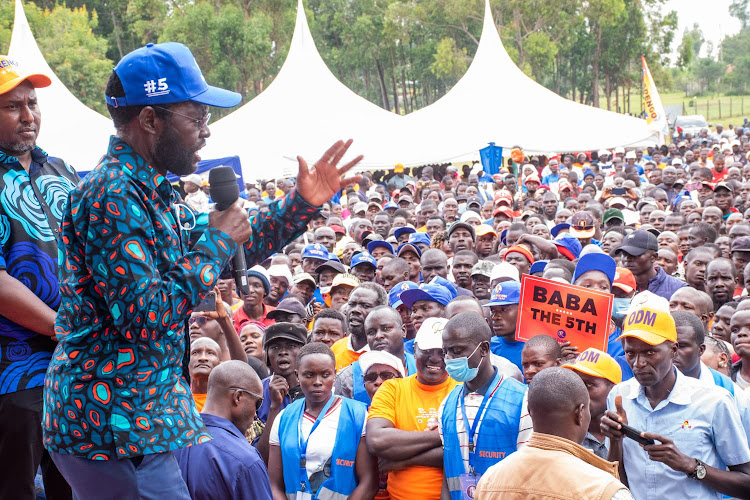 Anyang Nyong’o is seeking re-election, asking supporters for another term to continue with the transformation journey Kisumu embarked on five years ago.

Opinion polls have put him far ahead of his challengers, predicting a landslide victory for him.

When he assumed office, Governor Nyong’o described Kisumu as a county of great potential but a disappointing underachiever after losing so many opportunities during the previous regime.

The five years have been a remarkable story of progress, putting Kisumu on the right trajectory to uplifting basic needs of the populace. Kisumu has witnessed economic growth, greater access to education, expanded access to healthcare, infrastructural expansion, increased investor confidence and bumper harvest for farmers.

The governor has transformed Kisumu city from squalor to a magnificent golden sparking “yurop” as observed recently by Health Cabinet Secretary Mutahi Kagwe, who was astounded to find a totally different city to the one he visited five years earlier.

One notable transformation is the fresh breath of air around town, with the removal of the second biggest garbage dump in Kenya, Kachok dumpsite, less than two km from the central business district. This is a mission that was once described as impossible by the former governor.

The dumpsite had become a public health concern and an eyesore to residents since 1970s.

The administration has designated a new waste management facility in Muhoroni, where new waste is now processed in a bid to solve the garbage nightmare Kisumu has faced for decades.

To this end Nyong’o has kept his word to one of the prominent promises in 2017, affirming that the dumpsite would never again be used as a campaign tool.

The governor has invested in early childhood by recruiting new teachers, with more decent salaries, while also reviewing remuneration of the existing lot. Previously, ECD teachers in Kisumu were paid as casuals with no staff numbers.

His administration has since rewritten this embarrassing history by upgrading their employment terms to permanent and pensionable remunerated through the IPPD [he Integrated Personnel and Payroll Database] system as a reward to their diligent service.

To make education more affordable, the Bursary Fund has been doubled to Sh140 million annually and a full scholarship for needy pupils who score at least 350 marks in the KCPE exam.

To keep the promise of affordable and accessible healthcare, the Kisumu County Health Act was signed into law, creating an insurance scheme dubbed Marwa to provide social health insurance cover to all indigents in Kisumu.

The administration has also identified Community Health Services as a key pillar towards achieving Universal Health Coverage, bolstered by strengthening level 2 and 3 hospitals as the first contact of care for patients, inevitably decongesting level IV hospitals and Jaramogi Oginga Odinga Teaching and Referral Hospital for specialized treatment only.

Every subcounty has a functional maternity wing for safe deliveries, which has reduced child mortality rate. In Kisumu East, for instance, only 36 per cent of mothers were giving birth in hospitals. Today that number has gone up to 70 per cent.

Kisumu is now providing over 3,000 community health workers with a monthly stipend and health insurance cover besides training them to treat common ailments and minor injuries.

The initiative has reduced significantly the morbidity and mortality of children under age five. Kisumu is actually the only county piloting electronic Community Health Information System to leverage on technology to strengthen the community healthcare.

Another landmark development at JOOTRH is the construction of a Comprehensive Cancer and Blood Disorder Centre to control and manage cancer and sickle cell cases.

Upon completion, the people of Kisumu will no longer have to travel long distances to seek cancer treatment at high costs that force them to dig deeper into their already starved financial coffers.

Investment in agriculture continues to yield results, with overproduction of rice for the first time since independence.

According to the National Irrigation Authority, there has been an increment of 290,000 acreage under irrigation in Kisumu.

Nyongo’s election restored investors’ confidence in the county after dismantling a bureaucratic system ring fenced around potential investors, which was a rent-seeking ploy, and instituting regulatory reforms to create an environment conducive for business.

Kisumu residents cannot be prouder of the track record of Governor Nyong’o. By almost every measure, the county is significantly better off than when he came in. He has built the road that we need to get to a much more efficient system and deserves a lot of credit for that. The county has stopped walking with the chickens to begin flying with the eagles in the sky. A vote for Nyong’o is thus a vote for progress.

Voters urged to elect only party candidates for all six key positions.
Siasa
1 month ago

Ranguma set for clash with Nyong'o over Kisumu CBD campaigns

County has restricted rallies within town centre; ex-governor says he'll hold rallies there to get votes
Counties
1 month ago

It aims to ensure that all politicians maintain peace and unity before, during and after polls
Counties
1 month ago
“WATCH: The latest videos from the Star”
by EDDY ILLAH
Star Blogs
16 July 2022 - 14:18