Green hydrogen is produced using clean energy surplus sources such as solar and wind through electrolysis.

• Green hydrogen is increasingly becoming a game changer in the decarbonisation agenda in hard to abate sectors such as long-distance trucking, agriculture, mining and industrial systems.

• With its 92 per cent renewable energy sources, Kenya can be one of Africa's green hydrogen hubs, together with Namibia, South Africa and Morocco. 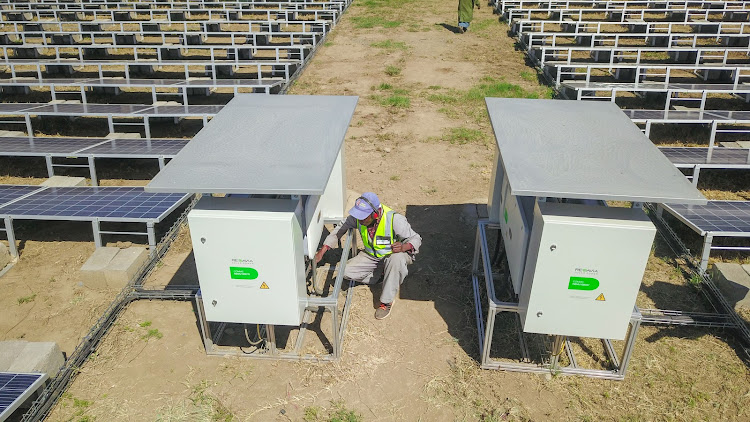 As energy sector stakeholders converged in Kigali, Rwanda this week for the Sustainable Energy for All Forum to chart a path towards the delivery of SDG7 on affordable and clean energy for all, there is growing consensus that the energy map is changing with the deployment of new and innovative energy technologies.

These emerging technologies are creating opportunities for both developed and developing countries. As a leader in renewable energy, Kenya is uniquely positioned to lead the adoption of such alternative energy sources such as Green Hydrogen.

Green hydrogen is produced using clean energy surplus sources such as solar and wind through electrolysis. It presents the most viable pathway to clean and sustainable energy systems from the different color classifications.

Green hydrogen is increasingly becoming a game changer in the decarbonisation agenda in hard to abate sectors such as long-distance trucking, agriculture, mining and industrial systems.

With its 92 per cent renewable energy sources, Kenya can be one of Africa's green hydrogen hubs, together with Namibia, South Africa and Morocco.

Hydrogen is produced from different sources. According to the Green Hydrogen Coalition (GHC), over 70 per cent of hydrogen in use globally is grey hydrogen from natural gas, followed by blue hydrogen.

The erratically rising cost of natural gas has drawn attention to the potential of green hydrogen with the proliferation of renewable energy use globally. This growing global political and business green hydrogen momentum presents opportunities for Kenya to tap into the early stages of research and development of these clean substitutes.

During COP26 in November 2021, President Kenyatta promised that Kenya would draw 100 per cent of its electricity supply from renewable energy sources, including hydro, geothermal, wind and solar energies, as compared to the current 70 per cent installed capacity, according to 2019 data.

This creates the right baseline for Kenya to develop and deploy other new technologies and innovations, such as green hydrogen. This can help Kenya achieve complete decarbonisation of its energy system as it expands to power the country's growing economy and enhance reliable energy access for all.

Kenya remains one of the most vulnerable nations to climate change due to extreme weather events, persistent droughts, floods and poverty. Perhaps the most crucial factor is that Kenya's economy depends on sectors susceptible to climate change such as agriculture, water resources, energy and health, tipping the vulnerability scale against its citizens and requiring immediate action.

Though a low global emitter, Kenya's Nationally Determined Contribution (NDC) aims to reduce greenhouse gas emissions by 32 per cent by 2030.

Kenya's agricultural sector, which employs over 50 per cent of the population while contributing to 22 per cent of the GDP as of 2022, is responsible for 40 per cent of the country's emissions. In addition, projections show that energy will be the leading emitter by 2030.

Kenya can create a green hydrogen market strategy around derivatives such as fertilizers and green ammonia. Additionally, as the country continues to grow its manufacturing sector, in line with the industrial transformation program and development blueprint, Vision 2030, green hydrogen can be used as a clean industrial feed-stock.

This can further clean up steel and cement manufacturing and create a platform to attract new industrial investment from energy-intensive global players looking to decarbonise.

Research bodies and think tanks such as IRENA indicate that governments can use green hydrogen to diversify their fuel sources, create green jobs and offer energy system stability while supporting economic development goals.

There is also an opportunity to export to the EU, for instance, where hydrogen demand is on the rise. As international investments are made available, the time is ripe for Kenya to decide on a bold green hydrogen strategy.

At COP26, the Rockefeller Foundation launched the Global Energy Alliance for People and Planet (GEAPP), which aims to support developing countries in accelerating progress toward ensuring universal access to clean, affordable and reliable electricity while protecting the environment.

Kenya made bold commitments to go 100 per cent green during the 2022 Powering Africa Summit organized by EnergyNet Limited in partnership with Power Africa and the GEAPP. The March summit took place in Washington, D.C.

It brought together energy stakeholders to discuss 'capital flows to support Africa's energy transition' toward energy security, a significant priority for most countries in Sub-Saharan Africa. Delegates shared the view that Africa can 'start right' with clean energy technologies with the right funding partners.

In this context, Breakthrough Energy, an emerging technologies venture capital firm, is making an early offer to inject investments into viable green hydrogen projects. The German development bank, KfW, and GIZ are already in this space, particularly looking at Africa's potential.

Kenya could benefit from the available climate-friendly financing and opportunities for technology and capacity transfer to launch its own green hydrogen strategy. Strong political targets, a clear roadmap, and strategic partnerships will be critical in unlocking the funds needed for Kenya to remain competitive, particularly in adopting and deploying emerging technologies.

The growth in investment is an indication of a global interest in fast-tracking the energy transition. Kenya needs to take bold steps to expand its clean energy technologies and speed up commercialization through a least cost approach.

A baseline Power-X study indicates that Kenya has potential to produce fertilizers and derivatives in the short to medium terms with pilot projects starting 2025. The Coast region, Rift Valley and wider Nairobi provide suitable location for successful green hydrogen production and markets.

The Centre for Strategic and International Studies (CSIS) notes that, "it is hard for an emerging economy to lead (in innovating)." Still, there is a difference between being an early or a late adopter. Kenya needs to build on the ongoing momentum to identify early development and deployment opportunities.

Technical and economic capacity still remain uncertain. However, technology companies such as Siemens Energy and Nel Alo are already producing the electrolyzers needed to produce green hydrogen at scale, and their capacities are on the rise.

This will help lower costs over time with increased adoption disposition of the technologies and higher production volumes as demand drives supply. Though some experts speculate that green hydrogen is 'big on promises' but 'short of realization,' historical data on innovation and technology proliferation gives us a good indication that green hydrogen has real potential as a fuel of the future. The clean energy transition and the pressure to mitigate the adverse effects of the looming climate crisis validate this push for clean alternatives.

Green hydrogen is a promising technology for developing countries to enhance energy security and industrialize while contributing to the reduction of greenhouse emissions.

Kenya's strategy, moving forward, should include pathways for successful development of green hydrogen and models to scale up implementation.

As a country, let us critically engage with this breakthrough innovation to tackle one of the great challenges of our time and secure a future for all. The goal is ambitious yet achievable as we work for a modern renewable energy system that can power Kenya.

The EU seeks to “contribute to peace and security and the sustainable development of the Earth”
Opinion
1 month ago
WATCH: The latest videos from the Star
by JOYCE KABUI
Star Blogs
20 May 2022 - 11:43