• This day can help in pushing for an exceptional and unique stand against the arrogant and all those who abuse or violate human rights in every corner of the world. 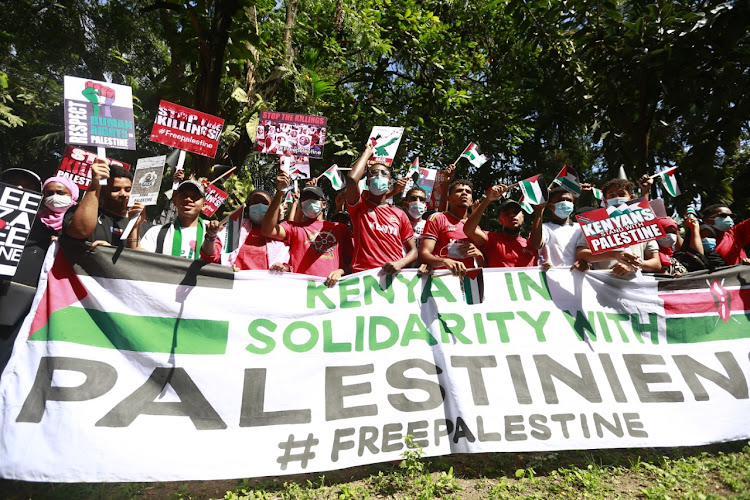 SEEKING PEACE Muhuri-led protests in solidarity with Palestine at Uhuru Gardens on May 17
Image: JOHN CHESOLI

Realising the importance of Alquds (Jerusalem) in 1979 the leader of Islamic Revolution of Iran, the late Imam Khomeini declared the last Friday of the holy month of Ramadan each year as the International Quds Day.

This is the day Muslims worldwide unite in solidarity against Israel oppression and show support for the Palestinians.

A brief look at the history of occupation brings to mind the significance of this move, and how it can galvanise support among all Muslim and non-Muslim people of conscious for a just solution to the plight of millions of Palestinian living miserable, undignified lives under occupation and others driven out of their homes into squalid camps.

Imam Khomeini proposed ‘International Quds Day’ and called upon all Muslims and freedom seekers for an international solidarity in supporting legal rights of Palestinians and all the oppressed people.

This day can help in pushing for an exceptional and unique stand against the arrogant and all those who abuse or violate human rights in every corner of the world.

This brilliant initiative has led to mass demonstrations and gatherings in constant voicing and defending the legitimate rights of the oppressed people of Palestine, because as long as Ramadan is observed, Quds Day and the Palestine cause will be commemorated and kept alive.

This day has thus become a significant symbol of global resistance movement against the occupation, terrorism, apartheid and injustice in the global order.

Israel’s practices and crimes against Palestinians have reached such severity that is reminiscent of Apartheid era South Africa.

Even international human rights organisations, normally reluctant to take a stance against Israel, have joined the chorus of objections.

Sadly, the full and one-sided support of the US and Western allies for the Zionist regime since 1948 has led to the killing of more than 100,000 civilians and 2,100 children, the incarceration of 4,400 Palestinians and 7,200,000 refugees in the region and beyond.

To stop this, the only way left is a worldwide resistance to ensure the rights of Palestinian people are respected. That’s why upholding the International Quds Day is important for all justice and freedom seekers. This is especially for Muslims across the globe, who should to keep alive the Palestine cause and maintain the precious values of humanity.

It is my hope and prayer that the voices calling for justice during this year’s International Quds Day rally will resonate louder and effective actions by the international organizations and world community will help bring this inhumane repression in Palestine to an end.

This will allow the people of that region, including Muslims, Jews and Christians, to live together in peace and harmony.

Israel-Palestine peace building should be based on justice

Israel must stop bias against non-Jews in Palestine

Dream of an independent Palestinian state has not seen the light of day amid symbolic international solidarity.
Opinion
1 year ago

The commander of the Quds Force was hero and symbol of the fight against terrorism in the Middle East
Opinion
4 months ago
by KHAMIS MOHAMED
Star Blogs
29 April 2022 - 05:00