Study findings indicate that 23.8 per cent of the total responses reported biased reporting of GBV.

•In countries of high media density, there is no aspect of society on which media have not had an impact, albeit to varying degrees.

•Media can also be framed as social actors in and of themselves, with the power to give impetus to social development. 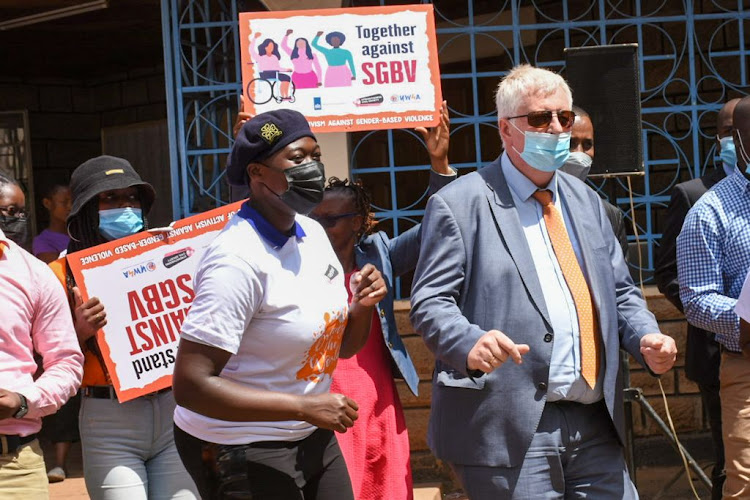 Netherlands ambassador to Kenya Maarten Brouwer joined members from Kibra slums marks the 13th day of Celebration of the world 16 days of activism against gender based violence at AIC Church Kibra on 7 December 2021
Image: MERCY MUMO

Media coverage of Gender Based Violence (GBV) in Kenya remains insensitive, lacking in depth and seems not to be prioritized by mainstream media as its with digital platforms.

Journalists will need to pay more attention and professionalism to matters GBV, given the increasing cases reported and the human rights violations involved. Concern about media reporting of GBV lies within the larger thinking that gender equality lies at the core of human rights approach to development.

An interim study report entitled “Media Coverage of Gender Based Violence during the COVID 19 period” jointly done by the Media Council of Kenya and Journalists for Human Rights’Voice of Women and Girls Project, notes there was lack of in-depth reporting on GBV during the COVID-19 pandemic.

Lack of sensitivity in covering GBV by the media, more stories on GBV on digital platforms than on mainstream media, use inappropriate language in coverage of GBV leading to double trauma to victims, victims left exposed especially of underage and rape victims, lack of statistics/data to analyse the trend, or map out hot spots for sensitization purposes.

According to the study, 26.2 per cent of the total responses hinged on the lack of follow up on GBV cases or day two stories by the media. Specifically, the study established that journalists rarely did follow-ups on any interventions/ treatment on GBV cases by those who reported them especially in the rural areas relating to action taken against the perpetrators. In addition, it was noted that GBV was mainly covered in news with a focus on victims rather than survivors.

Additionally, the study findings indicate that 23.8 per cent of the total responses reported biased reporting of GBV. Specifically, it was noted that while women, women with disability, girls, and children are the most vulnerable and were the most affected by GBV during the COvid-19 pandemic, there was bias against men in media coverage of GBV.

Whenever, a story of GBV was published online Kenyans drew mixed reactions and most turned out to be less supportive by blaming the victim and such comments were not flagged or turned off. Most concerning in the media coverage was noted was body shaming, victim shaming/blaming, privacy of the survivor while perpetrators being depicted as heroes for their acts and revealing of GBV victims together with their families.

The joint MCK/JHR study calls for improved focus, professional and sensitive reporting of GBV matters in the media, as this a serious human issue in the country.

“Media is one of the key agents that would be helpful in changing the narrative on gender issues especially affirmative action and the place it has in reducing imbalances on women and girls” Sammy Muraya, project lead at the Voice of Women and Girls Project notes.

“We must invest more in supporting investigating stories, more media voices and trainings for journalists on professional reporting of GVB in the larger context of protecting and promoting the rights of the vulnerable including women and girls” Muraya adds.

The Ministry reports that as at the end of 2020 about 5,009 gender-based violence cases were reported compared to 1,411 cases during the same period in 2019. The reports further indicate that Nairobi, Kakamega, Kisumu and Kiambu counties have the highest prevalence. Between January and March 2021, about 877 cases had already been recorded with a high prevalence in Nairobi, Kakamega, Kisumu, Nakuru, and Kiambu Counties. The former Prime Minister has thrown his weight into the matter cautioning couples, ‘if you cannot reconcile, then, leave and let live’.

The 2019, 2021 and 2021 GBV numbers calls for synergized efforts to fight the social menace. The role of the media cannot therefore be overemphasized noting that media plays a vital role in increasing awareness about GBV, which has seen a spike during pandemic restrictions. A collaborative approach that combines sensitive reporting together with advocacy, sensitization and support for media is essential in curbing this humanitarian crisis.

UNESCO notes that Media (newspaper, radio, television) and new technology are a part of culture and society. It is widely accepted that media are transmitters of culture and engines behind globalising cultures. In countries of high media density, there is no aspect of society on which media have not had an impact, albeit to varying degrees. Media can also be framed as social actors in and of themselves, with the power to give impetus to social development.

In a study done by the Media Council of Kenya and supported by Unesco in 2015, media in Kenya is male dominated despite the high enrolment of female students in Journalism classes. As a result of this exclusion, some categories of women receive less attention in the media. Among this are the elderly women, those from minority groups, religious groups, the working class and those with a different sexual orientation despite their success stories in their communities

Currently, there are not enough mechanisms for holding the media accountable for their failure to prioritise the affirmative action campaigns that would assist in increasing women participation in politics in Kenya. The media has failed to bring the gender debate to the national limelight by neither ignoring women in politics nor encouraging journalists to give attention to stories on gender.