LET US NOT FORGET

• As the 2022 general election nears, let us not forget slain IEBC technology manager Chris Msando who publicly boasted the system was foolproof.

• Some people didn't want a foolproof system. Police were supposed to investigate, leave no stone unturned, but it seems not even a pebble has been dislodged. 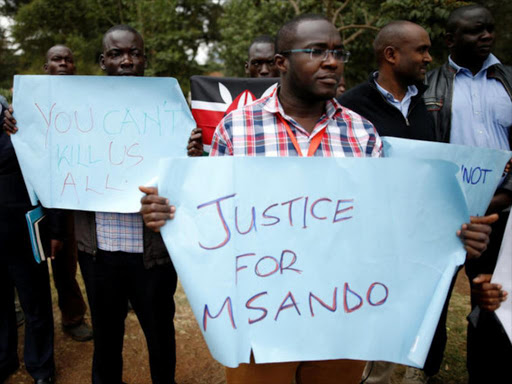 The murder of IEBC technology manager Chris Msando is one of Kenya's most high-profile unsolved cases.

He was outspoken that the transmission system for the 2017 election was foolproof.

Today (Thursday) marks the fifth anniversary of the discovery of his tortured body dumped near a thicket on Nairobi's outskirts.

His death cast a pall over that election.

The slaying bore the hallmarks of a political assassination. The motive seemed to have been linked to the outcome of the hotly contested poll because he was key to its credibility.

The police made a series of routine promises about no stone left unturned. It seems not a pebble has been disturbed.

Msando's family and the public want assurance such a high-profile manager could not be picked from his car yet his killers remain free.

Msando must never be forgotten. The killers must be brought to justice. Perhaps Martha Karua can do it.

The police have cracked many complicated cases.

Then-Police IG Joseph Boinnet said the murder was a grave crime and a special DCI Homicide team had been set up.

“We are following certain crucial leads we believe could lead to the arrest and prosecution of the murderers,” Boinnet said.

Akombe calls out Chiloba after 'warning' email over Msando death

'You have a moral obligation to speak out and get in good trouble.' Akombe quotes.
News
2 years ago

Akombe exposes the rot inside IEBC

Former IEBC Commissioner Roselyn Akombe has exposed the rot at the electoral agency, providing the first insider evidence that the August 8, 2017, ...
News
4 years ago

Investigations into the death of electoral commission ICT manager Chris Msando have hit a brick wall 12 months after his brutal murder in what is a ...
News
4 years ago

Chris Msando's family wants President Uhuru Kenyatta to extend national peace to them by finding and punishing his killers.Msando was the IEBC's ICT ...
News
4 years ago

A lobby wants the widow of former ICT manager Chris Msando to decline a state appointment as a way of fighting for justice for his murdered ...
News
3 years ago

The late Chris Msando's family has petitioned the government to expedite investigations into his murder.A postmortem revealed the IEBC acting ICT ...
News
4 years ago

IEBC commissioner Roselyn Akombe has fled for her life to New York, eight days before the presidential rerun.Akombe resigned, saying the October 26 ...
News
4 years ago

Ex-IEBC commissioner says she is ready to testify in death inquest.
News
2 years ago
“WATCH: The latest videos from the Star”
Leader
28 July 2022 - 04:00
Read The E-Paper