• Ruto has carefully chosen to endear himself to the small churches with no clear institutional structures.

• Biblically, one does not need to go further than a story in the Book of Acts to see what kind of a Christian Ruto is. 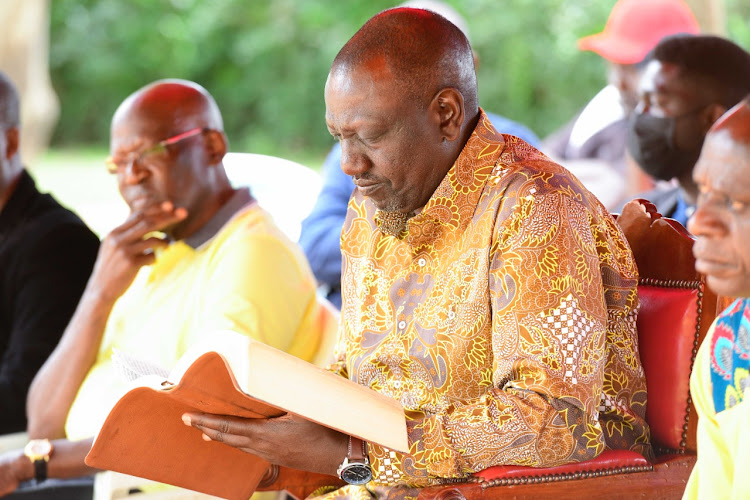 One of the most famous refrains from Deputy President William Ruto and his supporters is that they have God and the People on their side.

It is almost a foregone conclusion by many a political analyst that Ruto has captured the Kenyan Church and that it is pointless to take him on in this arena.

And yet, except for his bible-waving antiques and church harambees, his public persona does not resemble what has traditionally been associated with proper Christian values.

His constant association with theft of public resources combined with vitriol and insults against those who oppose him are the kind of sins for which Jesus Christ stormed the temple in Jerusalem and whipped traders.

Biblically, one does not need to go further than a story in the Book of Acts to see what kind of a Christian Ruto is.

It is about some seven sons of a Jewish Chief Priest called Sceva who were going around Ephesus driving out evil spirits.

“13 Some Jews who went around driving out evil spirits tried to invoke the name of the Lord Jesus over those who were demon-possessed. They would say, “In the name of the Jesus whom Paul preaches, I command you to come out.” 14 Seven sons of Sceva, a Jewish chief priest, were doing this. 15 One day the evil spirit answered them, “Jesus I know, and Paul I know about, but who are you?” 16 Then the man who had the evil spirit jumped on them and overpowered them all. He gave them such a beating that they ran out of the house naked and bleeding.” Acts 19:13-16

It is not hard for a keen Bible student to see that Ruto is more like the Sons of Sceva than Apostle Paul given his public persona.

Nearly every Kenyan you meet identifies with one religion or the other, with a large majority confessing to being Christians.

Of the Christians, 20.6% are Catholic, 33.4% are Protestant, 20.4% are Evangelical and 7% are African Instituted Churches, with the latter being of particular concern for this article.

To understand the effect of this “Christian” support Dr Ruto supposedly has, we need to go back to the year 2010.

This was the last, and only time, Dr Ruto spearheaded a national campaign during the 2010 referendum where he led what was mostly the Church and his Rift Valley backyard to oppose the Proposed New Constitution.

They ran a formidable campaign and even won in some unlikely places like Kitui.

However, with almost uniform support of the Church which constituted over 85% of the population, he still came way short with the “NO” campaign he led ending up getting less than a third of the votes.

I am yet to see evidence that he has the kind of near-uniform support from the Church he did in 2010 with which he still lost with a landslide!

In fact, despite the now-common refrain that they have God and the People, a careful assessment of his support base in the Church paints a very different picture.

One such Church leader was the late Shem Shamalla, the High Priest of the African Church of the Holy Spirit, a sect that does not believe in hospitals and modern-day medicine (The High Priest himself is alleged to have refused to be taken to hospital).

This particular case brought a lot of controversy for a Deputy President whose government has Universal Health Coverage as one of its Big Four Agenda.

Another of these controversial church leaders was House of Hope Bishop Godfrey Migwi who was so pro-Ruto that he once prayed for Raila Odinga’s death before elections to pave way for Ruto’s ascendency to the Presidency.

The story is replicated all over the country.

It is clear that a core part of Ruto’s support comes from the Africa Instituted Churches. These are churches that are led by Africans and that have deviated from the colonial churches led by white people over the course of the 20th century.

Any casual observer will have noticed that the UDA Party Leader spends nearly all of his church visits and harambees in these Africa Instituted Churches like the African Church of the Holy Spirit, mostly found in Western Kenya and The African Independent Pentecostal Church of Africa (AIPCA) mostly found in Central Kenya.

That has also been his strategy in other highly religious regions like Lower Eastern and parts of Nyanza.

Ruto has carefully chosen to endear himself to the small churches with no clear institutional structures and where the leadership is often centred around individuals he can deal with personally and reward as he wishes.

In return, these church leaders host him and extol his often-imaginary virtues on their pulpits.

In fact, it is rumoured by those in the know that every Sunday, these pastors are required to campaign for Ruto during their sermons, send evidence of the same to him after which he would personally send them money, which of course they do not disclose to their congregants.

Ruto has perfected the art of appealing to these leaders and their adherents – a factor that is largely credited for his popularity among church-going women in places like Central Kenya.

As you may be aware, the Mainstream Churches have mostly locked their doors to him with the Catholics and Anglicans instituting a ban on politics on the pulpit that many consider to be targeting Ruto.

It is also clear to him that these churches happen to have fairly well-informed congregations for whom his ‘hard-eyes’ lies would not go unchallenged.

With the small churches, most of which are technically sects and cults accounting for just 7% of the population, it is difficult to see how Ruto has captured the Church.

It is a perception he has created but which has no basis in fact, just as spurious as his never-ending claim that he has numbers in Parliament despite failing miserably every time his troops have defied Jubilee Party positions.

Ruto has not captured the Church.

It is a myth that is not very far from the photoshopped crowds his social media managers use to give the impression of a popular candidate in his rallies.