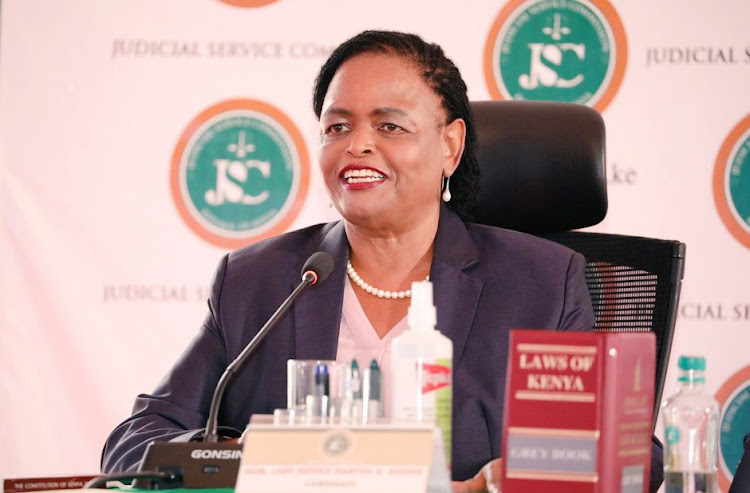 Justice Martha Koome appears before the JSC for her interview for the position of Chief Justice
Image: CHARLENE MALWA

For a brief period during the recent televised interviews for Chief Justice, Kenyans were thrown back to the days the Moi dictatorship had the Judiciary in a chokehold.

Senior Counsel Philip Murgor told the Judicial Service Commission panel that in those days, the courts operated as directed by the political leadership. “[They] gave you a sign about what was permissible and what was not,” he said.

Having served for eight years as counsel in the State Law Office, Murgor should know. Moi used the courts for his political objectives. Murgor prosecuted, among others, dissidents George Anyona, Edward Oyugi, Ngotho Kariuki and Augustus Kathangu. They were arrested in July 1990 during a crackdown on government critics and charged with sedition.

One unlucky George Mokaya Gichana was ordered by police to appear as a prosecution witness against the four. He refused. Gichana was immediately arrested and charged with possession of the proscribed underground publication, Mwakenya. Amnesty International reported that Gichana was tortured. What the state wanted, the state got at any cost.

The corridors of justice have a come a long way since then, as Martha Koome prepares to take over the reins of the third arm of government following her nomination by the JSC.

An independent Judiciary was among the many aspirations underpinning the resistance to the tyranny of Moi. The struggle for the Second Liberation culminated in the promulgation of the Constitution of Kenya 2010.

“One of the imperatives of the Constitution is to insulate the Judiciary from undue influence by other actors and restore its legitimacy and, most importantly, public trust,” Justice Aggrey Muchelule wrote a few months after the new supreme law came into force.

Without an independent Judiciary, he observed, “there is no other guarantee that the other branches of government will respect the rule of law and act within established legal norms, processes and institutions”.

The courts face another serious threat. If the BBI passes the referendum, the Judiciary will be under the oversight of a prefect appointed by the President, which might take the country back to when Moi directed the courts.

Willy Mutunga was appointed the first Chief Justice under the new Constitution in 2011. “We found an institution so frail in its structures; so thin on resources; so low on its confidence; so deficient in integrity; so weak in its public support that to have expected it to deliver justice was to be wildly optimistic. We found a Judiciary that was designed to fail,” he said months after taking office.

Two CJs into the new constitutional dispensation, and despite bold reforms to restore the Judiciary’s legitimacy and public trust, there is no doubt that the courts are still the target of dark political forces hell-bent on rolling back the democratic strides the country has made since the despotism of Moi.

While Mutunga avoided open confrontation with the Executive, his successor David Maraga was outspoken about his frustrations. He deplored repeated disobedience of court orders by the Executive, severe budget cuts that undermined the capacity of the courts to deliver justice, the refusal of President Uhuru Kenyatta to appoint 41 judges cleared by the JSC and many other difficulties.

A clear indicator of the heavy yoke the Judiciary labours under is the fact none of the judges of the Supreme Court applied for the powerful office. Acting Chief Justice Philomena Muilu and justices Mohamed Ibrahim, Smokin Wanjala, Isaac Lenaola and Njoki Ndung’u opted out of the race despite widespread speculation that they would seek to succeed Maraga.

By the end of last year 617,582 cases were pending in the courts despite Maraga’s efforts to clear the backlog through technology and physical expansion.

“Besides the Judiciary budget being the subject of abrupt cuts, the Judiciary’s funding has been on a downward trend since the 2012-13 financial year with the development component being the most affected,” Maraga wrote in the State of the Judiciary and Administration of Justice Report 2019-20.

In the financial year 2018-19, for instance, the Judiciary was allocated a mere Sh50 million for development. “The major result and impact of underfunding is the soaring of case backlog,” Maraga said.

The courts face another serious threat. If the BBI passes the referendum, the Judiciary will be under the oversight of a prefect appointed by the President, which might take the country back to when Moi directed the courts.

Whether Martha Koome will cure the ills bedeviling the Judiciary by improving delivery of justice and protecting the institution from meddling by the Executive remains to be seen.