BBI an affront to democracy and Constitution 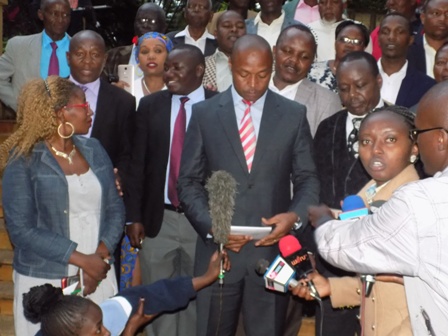 Democracy is popularly defined as the lead­ership of the people (executive) by the people (universal suffrage) and for the people (legisla­ture).

From the above definition, it is evident that there are these three distinct arms of govern­ment: Executive, Judiciary and Legislature.

While the main leader of the Executive is elected at the ballot, the Judiciary is an arm of legal professionals who interpret and implement the laws made by the people’s representatives in the Legislature.

For a democratic government to function well, the independence of each arm is to be assured as well as respected. The Constitution of Kenya 2010 clearly outlines the roles and functions of each of the three arms in chapters eight to 10.

The concept of separation of power is the hall­mark of democracy as we know it today. Where there is fusion of power in parliamentary and semi-presidential systems as proposed by the BBI Bill, political manipulation and manoeuvres become the order of the day.

It is unfortunate that the handshake between President Uhuru Kenyatta and the so-called People’s President Raila Odinga and the result­ant Building Bridges Initiative seek to blur the lines between the various arms of government by returning us to the old way of doing things.

Politics of tokenism is coming back, with politi­cians at the national and county level now being bribed left, right and centre to support the BBI agenda. The Sh2 million car grant promised to MCAs has been cited as a bait to hoodwink them into passing the BBI Bill. More than 40 county as­semlies have passed the Bill paving the way for a national referendum.

While the 2010 Constitution requires those who serve in the Executive to be non-political and non-partisan, BBI proposes that ministers be appointed from elected MPs. This will greatly interfere with their ability to be people represent­atives as well as serve their master in the Exec­utive.

BBI further proposes to remodel the parlia­mentary system by bringing the government back to the House, including the Prime Minister, Deputy Prime Ministers, Cabinet ministers, the Attorney General and leader of the Official Oppo­sition. This is exactly where we were before the 2010 Constitution when we demanded a clear separation of power to address corruption.

Those we entrusted with the implementation of the 2010 Constitution have failed and have in­stead decided to take us back to the old system to create positions for themselves.

A time has come for Kenyans of goodwill to stand up against this affront to the Constitution. Not like the phony MCAs and governors, some of whom have been proponents of Linda Katiba initiative, who for a morsel of bread (35 per cent revenue to the counties) are now swallowing BBI hook, line and sinker.

Fellow Kenyans let us make informed deci­sions when the BBI Bill comes up at the referen­dum. The law is an ass and in this case it is being flogged to serve, not you and I as the citizens of this country, but the proponents of BBI. Vote No to preserve, protect and promote our Constitu­tion which if implemented, has your best inter­ests at heart.

Say BBI is a fraudulent document that is being shoved down the throats of Kenyans.
News
1 month ago
by JOHN HARRINGTON NDETA
Columnists
28 February 2021 - 04:00