The 100 paid a high price for liberation from dictatorship. 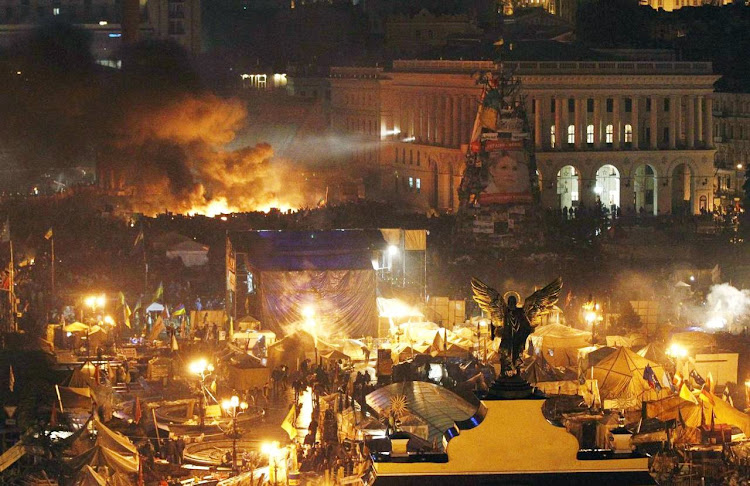 February 20 is marked annually in Ukraine to commemorate participants in the Revolution of Dignity and to honour the memory of the heroes of the Heavenly Hundred.

This day six years ago the confrontation between the Ukrainian people and the then pro-Russian regime reached its peak taking the lives of 100 people who defended their rights and the future of Ukraine.

Initial demonstrations started on November 21, 2013, in the central square of Ukraine’s capital Kyiv. On that night young people, mainly students, demanded closer European integration of Ukraine and protested unexpected government’s decision to suspend signing of an association agreement with the European Union, instead choosing closer ties with Russia.

However, after violent dispersal of students by the police more protesters joined, ultimately leading to the 2014 Ukrainian Revolution of Dignity. The scope of the protests expanded because of the unwillingness of the government to listen to the protestors and resulted in calls for resignation of the President Viktor Yanukovych and his government. By February 2014 the protests were fuelled by the perception of widespread government corruption, abuse of power, and violation of rights.

The government decided to resolve the problem through use of force. As a result, during the clashes with law enforcers more than 100 protestors were gunned down by snipers in the downtown Kyiv.

They became known as Heavenly Hundred Heroes, fighters for Ukraine’s freedom, who paid a high price for liberation from the dictatorship and its civilisational choice to be the part of Europe.

February 20 marks one of the most remarkable, yet stunningly scary days of modern Ukrainian history. Yet scarier days were yet to come.

Ukraine demands that Russia release all illegally detained citizens of Ukraine, and stop political persecutions on the temporarily occupied territories, including against representatives of national minorities, in particular Crimean Tatars, violation of fundamental human rights and freedoms—of speech and assembly, media and religion—and provide access to the occupied territories for established international human rights monitoring mechanisms.

Soon after Yanukovych and other pro-Russian high-ranking government officials fled the country, Russia embarked on military means of meddling in Ukraine, starting with occupation of Crimea and following with the aggression in Eastern Ukraine.

For six years the world has watched as Ukraine suffers from an unprecedented, for postwar Europe, violation of the basic norms and principles of international law.

The human price of the aggression is constantly growing, with more than 40,000 injured, 14,000 dead and 1.7 million internally displaced persons.

The illegal and fake referendums that Russia staged in Crimea have not been recognised by the international community. Russia ignores the implementation of its international obligations as the occupying power by conducting on the temporarily occupied territories systemic political persecutions on ethnic and religious grounds, as well as violating fundamental human rights and freedoms.

The intensive militarisation of the temporarily occupied territories threatens Ukraine’s national security, as well as regional security and stability.

On November 25, 2018, Russia attacked Ukrainian ships in the Kerch Strait and the Black Sea international waters, committing an open act of aggression against Ukraine.

Added to this there has been significant destruction within the heavily industrialised Donbas region, resulting in severe environmental degradation.

Due to the efforts of Ukraine’s army, mounting international political pressure and sanctions regime imposed by its partners Ukraine continues to counter Russia’s aggression.

A strong international coalition is actively supporting Ukraine, increasing pressure on Russia by demanding its full de-occupation of Ukrainian territories and ensuring implementation of the respective decisions of international organisations and international courts.

Just two days ago, Russia again broke the ceasefire agreement and shelled positions of Ukraine's forces using heavy artillery. This was after passage on intensive militarisation.

Ukraine demands that Russia release all illegally detained citizens of Ukraine, and stop political persecutions on the temporarily occupied territories, including against representatives of national minorities, in particular Crimean Tatars, violation of fundamental human rights and freedoms—of speech and assembly, media and religion—and provide access to the occupied territories for established international human rights monitoring mechanisms.

Andrii Pravednyk is the Ukraine Ambassador to Kenya

The fateful phone call is key to the abuse of power charge on which Mr Trump has been impeached.
News
1 year ago

Post-Maidan Revolution, Ukraine grows its presence in Kenya, and Africa