The cost of food is likely to increase in 2023, considering the world experienced the worst drought in 40 years.

• The political and economic volatility since the onset of the pandemic has curtailed prudential decision-making, particularly in financial management.

• Kenyans must, therefore, understand the realities they'll have to confront in 2023 and make wise short-term and long-term decisions. 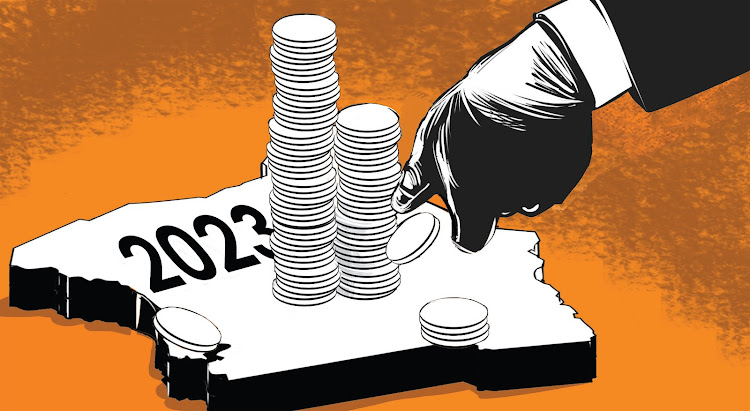 Last year was among the most challenging years for many Kenyans.

The festivities offered a period of self-reflection on the achievements and accomplishments made within the year to help set future goals.

The majority of Kenyans were unable to fulfil some of their goals due to the tough socio-economic situation across board. This is reflected across the globe as different nations are grappling with economic uncertainties occasioned by the Covid-19 pandemic, global conflicts, and political uncertainties.

The political and economic volatility since the onset of the pandemic has curtailed prudential decision-making, particularly in financial management. Kenyans must, therefore, understand the realities they'll have to confront in 2023 and make wise short-term and long-term decisions.

The cost of fuel is expected to reduce marginally in 2023. The conflict in oil-producing nations, coupled with OPEC's monopolistic dominance in the fuel supply and value chain, seals the fate of oil-importing nations.

Consequently, the cost of fuel and, by extension, electricity, transport, and manufacturing, will remain impervious in 2023.

The high cost of living will have a huge impact on the disposable income of most Kenyans. This will affect the amount of money available for expenditure on non-necessities such as luxury goods, clothing, and electronics. Consequently, the high cost of living is likely to stagnate the performance of businesses across all sectors, particularly the retail segment.

The government is experiencing a cash crunch as Kenya continues to live way above her means. The current fiscal deficit was estimated at approximately Sh862 billion, or 7.5 per cent of the GDP. Although the government plans to slush the Sh3.3 billion budget by Sh300 billion as per proposals by the administration, the cost of debt is likely to increase or remain constant.

The rise of the dollar against the Kenya shilling has increased the cost of foreign debt servicing by over 20 per cent. The majority of Kenyan foreign debt is denominated in the greenback, hence affecting the cost of debt. Likewise, the devaluation of the shilling against the dollar will further widen the trade deficit, pushing the inflation rate and cost of living even higher.

The consumer price index is expected to increase despite the increase in the interest rate by the CBK to curtail further inflationary increases. Furthermore, the World Bank and the IMF have lowered the global GDP projections from 4.1 per cent in 2022 to 3.2 per cent in 2023. This is partly due to the impact of climate change on the global economy and geopolitical escalations that have affected global supply chains and the productivity of key global food baskets.

The cash crunch in the public sector is likely to affect the welfare of employees in key government entities and agencies and private organisations that provide goods and services to the government. Fiscal consolidation is part of the governments' conduits to address the huge wage bill and meet the austerity recommendations by the IMF.

A section of government employees, particularly casual workers, are likely to face the cut in a bid to lower recurrent expenditures.

The allocation of funds to the counties, semi-autonomous agencies, consolidated funds, and state departments will likely experience delays in the current fiscal year. The cash crunch, coupled with an expected decline in tax remittance from the anticipated economic downturn, will affect public cash flow and the Kenyan government's ability to meet her financial obligations. As such, salary delays may be experienced, particularly for government employees.

The global investment market is more volatile as nations face high inflation rates and economic recession. Financial sector regulators, including the US Fed and the CBK, have introduced monetary policies to help steer through the potential economic risks, including increasing the interest rates.

The fiscal policies adopted by the CBK, including raising the interest rates by 175 basis points, are unlikely to deflate the rising CPI. The impact of other global externalities beyond the control of the Kenyan government, including the rising dollar price and high fuel cost, among other geopolitical actors, will likely render the CBK monetary measures toothless.

The higher gains in the inflationary rate vis-à-vis the local interest rates will further erode local investments denominated in the Kenyan shilling. The rising interest rates in developed nations – which generate better returns and have a lower investment risks factor - coupled with the devaluation of the shilling against the dollar, Euro, and Sterling Pound has affected the flow of foreign direct investments. The Nairobi Stock Exchange has shed an estimated Sh597 billion between January and December.

The external flow of FDI will likely affect the ability of listed firms to raise equity through the security market and the return on equity from invested capital. Moreover, the shift of FDI from emerging markets will further cripple Kenya's economic growth rate. Consequently, this will further stagnate the creation of new jobs within the public and private sectors, increase unemployment rates, and lower the cost of living for a considerable proportion of the population.

The choice of the ideal investment vehicle will demand careful evaluation of micro-economic parameters and risk exposure from various investment avenues. However, Kenyans should ensure that they integrate a blend of liquid and illiquid investments in light of current and future economic uncertainties. Liquidation of immovable and fixed assets such as land will be challenging considering the low disposable income and the risk avoidance among consumers during economic downturns.

The security weaknesses within the financial services sector have made Kenya a hotbed of cybercrime. This, coupled with the weak regulatory and criminal justice system, has further exposed Kenyans to cybercrime and pyramid schemes.

Notably, we must acknowledge the 'get rich quick' ambition of Kenyans that has rendered them susceptible to fraud and pyramid schemes. Due diligence is vital before making any financial commitment to potential investments. Cybercriminals will only become bolder in the next year. It's, therefeore, the sole obligation of each Kenyan to avoid falling to fraudsters. A wise man once said, "When the deal is too good, thinking twice is not enough."

I'll leave you with this quote by Maya Angelou "Hoping for the best, prepared for the worst, and unsurprised by anything in between."

Happy New Year to everyone.

The writer is a director, BEWA Research and founder of Voice ya Vijanaa

Opiyo Wandayi said Kenyans are crossing into the new year with a sense of foreboding.
News
1 month ago

We must develop using our revenues, not debts - Ruto tells Kenyans in new year mesage

He said the removal of subsidies was key in helping the country save on wastages.
News
1 month ago

Russia said its oil and oil products will not be sold to anyone imposing the price cap.
News
1 month ago
Post a comment
WATCH: The latest videos from the Star
by BERNARD KARIUKI
Opinion
03 January 2023 - 05:00
Read The E-Paper