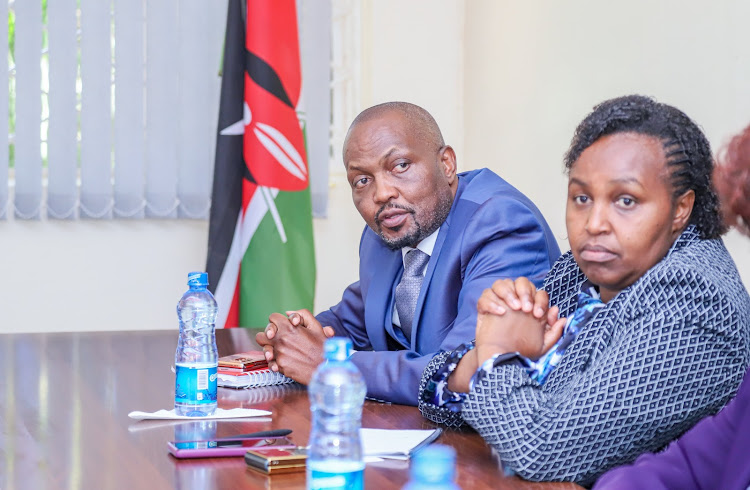 Trade CS Moses Kuria during a meeting with PCS Musalia Mudavadi and Assistant US Trade Rep for Africa Constance Hamilton on November 11, 2022.

There is a raging debate about the government's decision to import a large consignment of maize to stave off hunger brought about by one of the most dreadful droughts in a generation.

Trade CS Moses Kuria has been savaged in the past week because of his morbid choice of expression.

Maize is a political and emotional crop and a national staple about which a furious debate, or a scandal, is never too far whenever the nation takes to discussing its importation or its quality.

There are already political rumblings in northern Rift Valley, our breadbasket, about the wisdom, or the lack of it, in Kuria’s 10 million bags duty-free GMO maize.

Hunger is not a subject of debate. The government must be seen to move with speed and make sure no one gets into food distress on account of sluggish response to an emergency.

But even as Kuria makes the far-reaching decision to import the large consignment, the Kenyan farmer must be first in the queue.

The government cannot buy foreign maize before exhausting the stock held by our farmers in their stores across the country.

Kenyan taxpayers cannot be in the business of subsidising foreign farmers.

Quote of the Day: “Man knows that the world is not made on a human scale; and he wishes that it were.”

"Government should buy all locally produced organic maize at Sh10,000 per bag."
News
2 weeks ago

He said there was no need to rush importing maize if Rift Valley had sufficient produce.
News
2 weeks ago

KPA said some 37 vessels are expected at the port of Mombasa.
News
2 weeks ago
Post a comment
WATCH: The latest videos from the Star
by STAR EDITOR Editorial
Opinion
23 November 2022 - 04:00
Read The E-Paper