RAME: Why Ukraine chose to fight

• What is at stake here is not just the future of Ukraine but Russia’s full-scale war against Ukraine, launched on February 24 is a challenge against the world order

• This is an order ruled by law, not military power. An order guided by the principles of good governance and respect for human rights for the sake of human capital development. 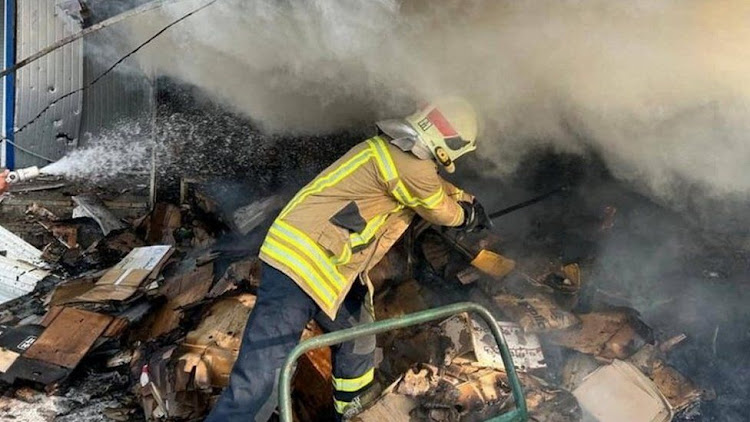 Russia is continuing to target areas of Donetsk region

As Ukrainians living in Kenya, we have been here long enough to have many Kenyan friends.

And there is one question that one such friend asked us that really got to the heart of the Ukrainian identity.

They asked: “Why did Ukraine choose to fight Russia instead of just negotiating peace with the much stronger neighbouring country?”

Our friend pointed out to certain neighbouring countries adjacent to Ukraine that did not resist the Russia hegemonic agenda and accepted a fate as vassal states of Russia.

Within the Russian orbit, such a status comes complete with a figurehead “leader” selected for them by Russia, who is answerable to Moscow and not to the citizens of that country. But apparently, in this way these countries were spared the kind of massive, unprovoked, and indiscriminate destruction that Ukraine is currently facing.

So why did Ukraine choose to fight? Especially as in the period just before Russia’s unprovoked invasion, even our likely allies in Europe and America did not give us any chance of success.

In all the informed opinions of experienced military men, the conclusion was that the Russians would reach Kyiv in just seven days and completely destroy the Ukrainian army as their tanks rolled victoriously and arrogantly towards our capital city.

No doubt other Kenyans have had the same question in mind. And as Ukrainians living in Kenya, we would like to offer an answer by courtesy of this newspaper.

First we would like to borrow from some points which were raised when the First Lady of Ukraine, Olena Zelenska, led the “Second Summit of First Ladies and Gentlemen” on July 23.

It was pointed out that what is at stake here is not just the future of Ukraine but Russia’s full-scale war against Ukraine, launched on February 24 is a challenge against the world order, which was carefully built over decades.

This is an order ruled by law, not military power. An order guided by the principles of good governance and respect for human rights for the sake of human capital development.

The deterioration in global security caused by Russia’s aggression has threatened the world with unprecedented economic recession and contributed to the surge in living costs and deepening inequality in access to healthcare, education, and social care.

Russia’s aggression has resulted in the biggest increase in defence budgets around the world. It also provoked an unprecedented global food crisis, the largest migration since the Second World War, and many other global consequences.

We need to spare no effort to stop Russian aggression and bring our world back – a world where human rights prevail over the power of weapons, brute force, and autocracy.

At the national level, we Ukrainians are not just fighting to repel an invader and an occupier. We are fighting for our way of life and for our existence as a people and a nation.

The Russian neo-colonial agenda is that Ukraine should cease to exist as a nation, and instead become just a province of a greater Russian empire. That we should cease to speak our language. That in years to come Ukrainian children will think of themselves as Russians rather than Ukrainians. That our centuries of struggle for nationhood should end in defeat and collapse. That our culture and our traditions should be completely wiped out.

Russia has shown that in order to achieve this agenda, it is willing to destroy Ukrainian towns and cities. Russia is more than willing to devastate Ukrainian farmlands and to steal Ukrainian grain harvests. Russia is willing to bomb civilian facilities and population centres. Russia’s military strategy focuses on targeting school, universities, hospitals, and other key institutions.

Surrendering to Russia under these circumstances would amount to denying our own nationhood which our ancestors struggled to achieve over centuries.

This we are not willing to accept and that is why we will continue to fight.

Ukraine and Russia have accused each other of attacking the camp.
News
2 weeks ago

The blockade of Ukrainian ports has led to food shortages and price rises.
News
2 weeks ago

A UN-led deal was signed a week ago to resume exports after a blockage which led to food price rises.
News
2 weeks ago