•That is, a multi-sector approach, a stronger inclusive governance framework, comprehensive participation of local communities and unique programming from each rural community. 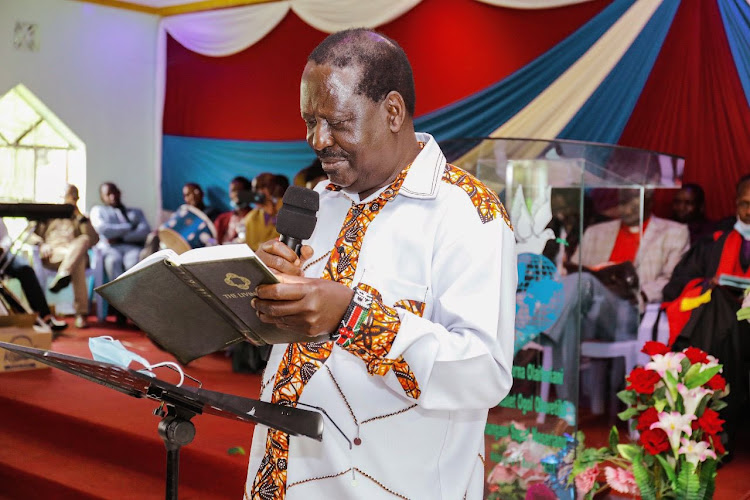 In June of this year, the former Prime Minister Raila Odinga gave a statement on his Twitter handle on the need to prioritize rural development and integrate it with urban regeneration for a prosperous Kenya. The Premier’s position deserves further discussion.

The African Union’s Comprehensive Africa Agriculture Development Programme (CAADP) defines rural transformation as the process of comprehensive societal change whereby rural societies diversify their economies and reduce their reliance on agriculture; become dependent on distant places to trade and to acquire goods, services and ideas. It is a facet of rural development that has been a subject of economic development theories for over 6 decades.

In the 1960s, focus was on modernization of agriculture in the rural areas marked with the use of new farming techniques. The 70s saw increased state involvement in rural development with a focus on agriculture and the green revolution agenda.  Locally, this is the point Mzee Jomo Kenyatta proposed the return to the rural areas to develop our ancestral land through farming. In the 80s, the Bretton Woods institutions led the campaign for market liberation and less government involvement in agriculture and rural development under the structural adjustment programmes. The 90s was culminated with increased participation from rural communities in their development agenda, microcredit and the proliferation of the Participatory Rural Appraisals and Rapid Rural Appraisals. Locally this was best achieved much later through the public participation clause in the 2010 constitution.

It is on this historical pedigree that in 2011, the OECD developed the new rural paradigm that is a comprehensive and inclusive rural development agenda. In structure, approach and design, what the premier is proposing is in fact the New Rural Paradigm.

Features of the Proposal

Railas’s proposal has four key features; a multi-sector approach, a stronger inclusive governance framework, comprehensive participation of local communities and unique programming from each rural community as opposed to one size fits all.

First, decades of trial and error in this segment of development has shown that while agriculture and agribusiness associated activities must remain in focus, it cannot be the only item of focus.  A successful rural development programme needs to have options in agroforestry and tree planting, tourism, energy and indeed manufacturing. Counties like Turkana are already leveraging on culture and heritage for tourism. This can be amplified and replicated across the country. To date, there is no place I can visit to listen to Giriama Music, dance to the rhythm and enjoy the coconut laced cuisines, much as I am a big fan. Additionally, with good policies, manufacturing can move to the rural areas now that the country has invested in infrastructure across board. This is a case of not putting all our eggs in one basket.

Secondly, rural development needs to be people driven. The older folk remember the Millennium Villages Project by Columbia university implemented in Kenya and other African Countries. While several villages benefitted from technology transfer, the project failed to deliver the desired results and in fact certain villages even lagged behind due to dependency on the university. Ideas were foreign and there was little or no local ownership. Development must be from the inside out. Locals must drive the development agenda by prioritizing areas of development and highlighting most pressing hindrances that need addressing. This however must be in tandem with the third feature.

The third feature of the proposal is the presence and significant role of government in rural development. This cannot be overstated. In 1979, Mohammad Yunus the father of microfinance commenced work with youth and women groups in Rural Bangladesh. He lent to the small groups to make products and engage in small businesses. It didn’t take long before Yunus and associates realized the mistake; everyone was producing the same products. They needed an external market. Competition was rife and was getting unhealthy. The cost of production was quite high as there was no significant participation from the government. It took the intervention of development partners to get the government on board for there to be investment in infrastructure, regulation of competition and the opening up of markets in other regions and overseas. The government must however be inclusive and participatory. Perhaps we have achieved this framework through the devolution structure and public participation principle in our constitution. This has worked in Makueni county under governor Kibwana and can be replicated.

Finally, the proposal brings to fore the need for unique programming for each region and urban center. Assuming that what works in Awendo, a sugar production driven economy would work in Mtwapa, a tourist destination would lead to unsuccessful implementation. This is perhaps why a successful rural development policy must be proposed by the national government but formulated and implemented by the county governments. The agenda must adopt a policy as a cycle approach where implementers are at liberty to formulate and revise the policy depending on their unique circumstances.

A well implemented rural development policy would lead to fast growing rural areas with jobs and livelihood opportunities, health facilities, quality education, amenities, food security and nutrition. This will in turn reduce the migration to towns consequently easing the pressure on the few opportunities and facilities therein.

Consequently, the proposal by the premier is timely, and well thought out. According to the International Fund for Agriculture and Development (IFAD), China has had thirty years of agricultural and integrated rural development programme. The programme integrated government investment and community activity to leverage on sterling results. In February 2021, the Chinese government announced it has eliminated extreme poverty in the country. The economic growth has been rapid and China is expected to be the biggest economy in the world in the next 5 years.

Post the COVID19 pandemic, our economy is in shambles and many Kenyans have lost their livelihoods. Considering 70% of Kenyans live in rural areas, it makes sense to start the programme of recovery from the rural areas coming to the urban centers.

In 2003, African governments realized the need and urgency to prioritize and invest in agriculture towards employment creation, food security and rural transformation. This was captured in a programme Comprehensive Africa Agriculture Development Programme (CAADP). While Kenya is a signatory to the compact and the promise of spending at least 10% on agriculture, the country has only managed an average of 2.3% per annum. In agriculture, as in many facets, we are big in words but poor in delivery. This gap needs addressing.

Investment in agriculture needs to target climate smart production, storage, better supply chains and market systems and proper governance. The traditional distribution channels need to be opened up. Countries like Ghana have a national electronic and online agricultural trading systems that ensure that oversupply is seen from an early stage, storage facilities availed and prices stabilized. Locally, the youth have developed similar applications but lack investment to roll them out. Investment remains the single most pressing gap.

But Raila’s approach is a two thronged approach of rural transformation and urban regeneration. Fast-growing cities in emerging economies such as Brazil, Indonesia, South Africa and Turkey are often drivers of growth and development. In the past, towns like Mtwapa and Ongata Rongai created new economic ecosystems and drove growth in these regions upwards. Today, Khayega in Kakamega and Chaka in Nyeri are both growing rapidly pushed by agriculture. But one more factor is evident in both centers, they are close to major urban centers and are able to attract trade from the major towns. While agribusiness is the primary driver of growth in most rural areas, entrepreneurship and trade remain the key drivers of growth in the urban centers. Urban regeneration therefore holds promise for small businesses in the urban centers and employment for the youth.

The UN Habitat defines Urban Regeneration as the process of reversing inner city decline by both improving the physical structure and the economy of those areas. Urban regeneration brings back underutilized assets and redistributes opportunities, increasing urban prosperity and quality of life.

An integrated approach to development that combines focus on rural transformation and urban regeneration holds promise for this country. It is indeed true that this has started to take shape in most rural Kenya.

Odhiambo is an Economist working in Kibera, Nairobi