How Kenya can benefit from new Asian tigers

ASEAN offers its individual members more influence and autonomy on the global economy than they would have on their own.

• Kenya has excellent bilateral relations with ASEAN countries, which can be exemplified by the growing bilateral ties, periodic exchanges of high-level official visits 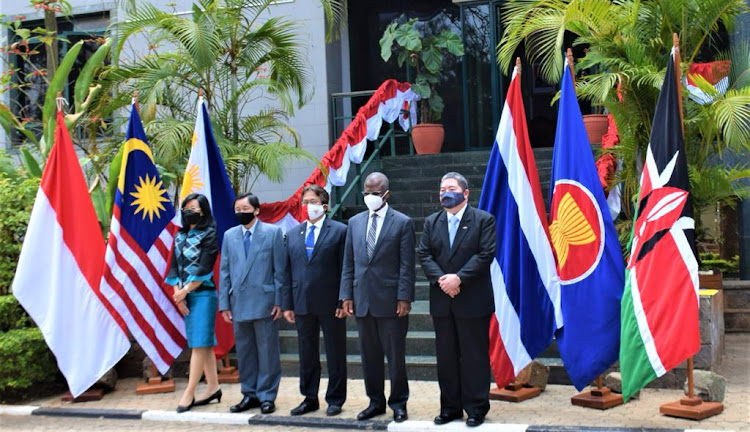 Asia is now home to most of the world’s biggest economies that jointly account for more than 50 per cent of the global GDP.

Kenya and the EAC can exploit the vast trading opportunities offered by the Association of South East Asia Countries members and even attract foreign direct investment from this region.

This came out clearly during the 54th anniversary of this association on August 19 at the Embassy of Indonesia's Chancery in Nairobi.

The event hosted by Indonesia Ambassador Mohamad Hery Saripudin was attended by diplomats from ASEAN missions in Nairobi, and members of the diplomatic corps. Ambassador Saripudin is the 2021 chair of the ASEAN Nairobi Committee.

The association brings together 10 Southeast Asian states comprising Brunei, Cambodia, Indonesia, Laos, Malaysia, Myanmar, the Philippines, Singapore, Thailand and Vietnam. As the association continues to promote peace, friendship, economic integration and free trade in the region, it serves as a good example to the EAC in its efforts to consolidate its gains.

This was noted by Kenya’s director general of bilateral and political affairs, Ambassador Galma Boru in her speech on behalf of the Foreign Affairs Cabinet Secretary: “EAC will continue to benefit from your rich experience as we pursue the same objectives as ASEAN. Furthermore, as we gather here in solidarity with ASEAN, the occasion affords us with an opportunity to explore areas of cooperation with the regional bloc.”

As is usually the aim of such regional institutions, ASEAN offers its individual members more influence and autonomy on the global economy than they would have on their own. It gives them an opportunity to grow on a single regional market.

Kenya has excellent bilateral relations with ASEAN countries, which can be exemplified by the growing bilateral ties, periodic exchanges of high-level official visits between the two regions and a synergy of interests in multilateral forums. This was aptly demonstrated by their overwhelming support for Kenya’s candidature for the UNSC non-permanent seat.

To further reach out to various countries, the association has established numerous committees in third countries. Since its establishment in 2014, the ASEAN Nairobi Committee has worked towards tightening the knot between Kenya and the community member states.

In 2020, for instance, the committee contributed to the Kenya Covid-19 Emergency Response Fund. In 2018, the ANC also made a donation to the Kenya Red Cross.

But there exists more opportunities for enhancing the partnership, particularly in creating and implementing joint strategies in tackling global challenges such as Covid-19, climate change and conflicts.

The association presents opportunities for Kenya due to its geostrategic location. We act as a gateway to the African market, particularly to regional markets like Comesa, the EAC and in the recently established African Continental Free Trade Area.

Also, ASEAN investors can set up manufacturing plants in the Special Economic Zones and tap into emerging business opportunities available in under the public-private partnerships.

Kenya’s plans to establish a diplomatic mission in Jakarta will not only enhance her bilateral relations with Indonesia but also act as a platform for leveraging the growing and fruitful relationship with the association members.

It is all about living up to the theme, "One Vision, One Identity, One Community."

The writer is the executive director of South-South Dialogues, a Nairobi based research and development communication think tank.