Will the US be able to protect its allies around the world?

• The US would drive the Taliban, then the rules of Afghanistan out of Kabul and back into the remote rural mountains. 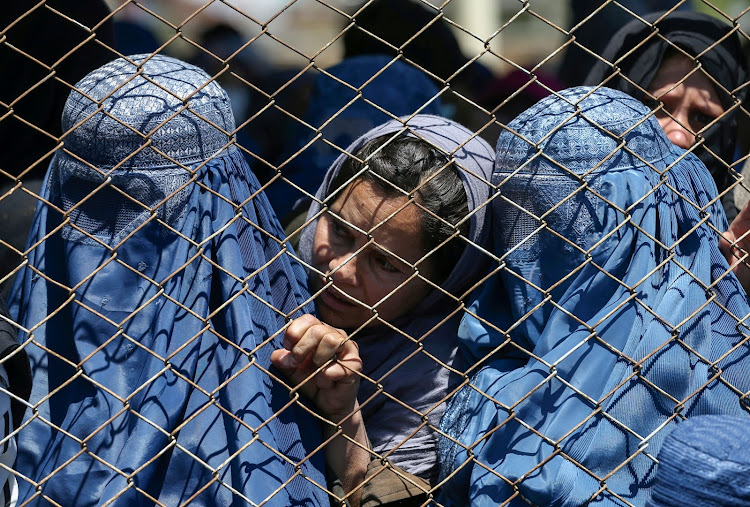 Afghan women wait to receive free wheat donated by the Afghan government during a quarantine, amid concerns about the coronavirus disease (COVID-19) in Kabul, Afghanistan April 21, 2020.
Image: FILE

Just like in the 2000 film Gone in 60 seconds, everything went by so fast than anyone could have anticipated.

Two decades of hard work, over 2 trillion dollars spent, an estimated 2,400 US military men dead and thousands of civilians killed, would go down the drain in what was barely nine days.

To understand the complexities of Afghanistan and the climax of the United States longest war, one has to grasp the beginning.

In the aftermath of the September 11, 2001 attacks in the United States, the US would led an invasion of Afghanistan as it went after the perpetrators of the attack who largely comprised of Al-Qaeda insurgents.

The US would drive the Taliban, then the rules of Afghanistan out of Kabul and back into the remote rural mountains.

What followed since has been years of investing into government reforms and military firepower to boost the Afghan military capabilities to keep the Taliban insurgents at arm’s length.

In the mission was also the United Kingdom and States aligned with the North Atlantic Treaty Organisation (NATO).

Over the two decades, a number of changes have occurred in the vast Middle Eastern country including eased restrictions to daily life.

For instance, key reforms have enabled women to study and work under a lesser application of Islamic laws.

Despite the sacrifices in time, money and even lives, its back to square one in Afghanistan with events across nine days sending the country back 20 years.On February 29, US troops begun their withdrawal from Afghanistan setting off what was a Taliban offensive across the country.

Subsequently, Provincial capitals begun to fall while the Afghan army shrunk after each defeat to end with just two-units in the middle of August.

August 15 was however, the peak of Taliban’s rebound, yet, while the day is now coined at the fall of Kabul, there was hardly any blood shed as the Afghanistan government basically surrendered and run.

Just weeks earlier, US intelligence reports had indicated that Afghan’s capital Kabul would have held up for several months.

The intelligence reports would however be exposed in just hours as the Taliban entered the city’s outskirts and raced to take the Presidential Palace by nightfall.

Amidst the takeover, the US military would evacuate its staff at its embassy where the country’s flag was lowered.

Days after, the fall of Kabul has been compared to the fall of Saigon in April of 1975 and at the end of the Vietnamese War where people were airlifted off the roof of the US embassy.

Curiously, US President Joe Biden had just weeks prior pushed back on such an eventuality insisting the Taliban are not comparable to the North Vietnamese Army takeover of Saigon.

As staff at the US embassy burned and shredded secret documents, it was clear the US had lost the war.

On the same day, the world lenses would focus on scenes at the Kabul International Airport as thousands of Afghans sort to flee the country, an expression of fear for the Taliban’s return.

Put shortly, it was a pandemonium as people forced themselves into planes, latched onto parts of craft while some unfortunately fell to their death or were crushed in stampedes on the runaway.

The US military and the Taliban used whips and teargas to control crowds as many scaled the airport’s walls in an attempt to get on evacuation planes.

Among the unfortunate cases of death off the runway is young Zaki Anwari, a member of the Afghan national youth football team.

The fall of Afghanistan has sent shocks across the globe despite it’s largely bloodshed nature.

Nevertheless, many including myself would argue the climax of the US campaign in the country was no mere shock.

For starters, it is hard to force down any country down the path of stability through occupation.

If anything, the direction any country takes is likely a choice by its inhabitants.

Former Soviet Union leader Mikhail Gobachev, whose country occupied Afghanistan before stated the US intervention in the country was a failed enterprise from the start.

Further, he stated the invasion was founded on the exaggeration of the threat and a poorly defined geopolitical ideas.

Former US President Trump has subsequently termed the events of this month in Afghanistan as the US greatest humiliation.

Sitting president Joe Biden has however slammed criticism saying the mission has successfully achieved its intended ended and that there was no other way out but a US exit.

Perhaps both Biden and his predecessor are right. The US exit would be inevitable.Even so, perhaps the fall of Kabul was also an undeniable eventuality.For instance, the announcement of the withdrawal by the US weakened the Afghanistan army even as more US allies including United Kingdom unofficially announce their withdrawal.

Today, many Afghans feel betrayed as the foreigners departs, unwillingly handing the upper hand to the Taliban.

To many analysts, the fall of Kabul has increased the calls for a return to realism- an admission that the US is unable to uphold world order and the adoption of less zealous approaches.

Many more argue through reports, that the US has lost its credibility especially among countries currently dependent on it for protection including Taiwan, South Korea and the Philippines.

Will the US be able to protect its allies around the world? Can its word be trusted on such matters , will a similar collapse in Afghanistan occur?

While only the length of time will provide the answers to this questions. More pressing questions are directed at the future of Afghanistan.

For instance, there is persistent unclarity, on what a return to Taliban leadership will mean.

For instance, women are now living in fear of a return to the strict interpretation of the Islam law to include the wearing of burqas, a ban on women leaving the house without a male guardian and the ejection of women from work.

Already, the price of burqas has shot up in the country while educated women are hiding away their certificates while women in sports are burning their uniforms’.

Moreover, the world is weary over what Taliban’s win will mean for the region.

We pray for peace and stability in the world during this difficult period, especially with the pandemic affecting global trade, health of nations, and creating recession in all markets.