Nine months into its invasion, it has lost more than half the land it seized.

• The Kremlin said it was open to negotiations, but not on the West's demand to pull out of Ukraine.

• Russia illegally annexed four Ukrainian regions at the end of September, without controlling any of them. 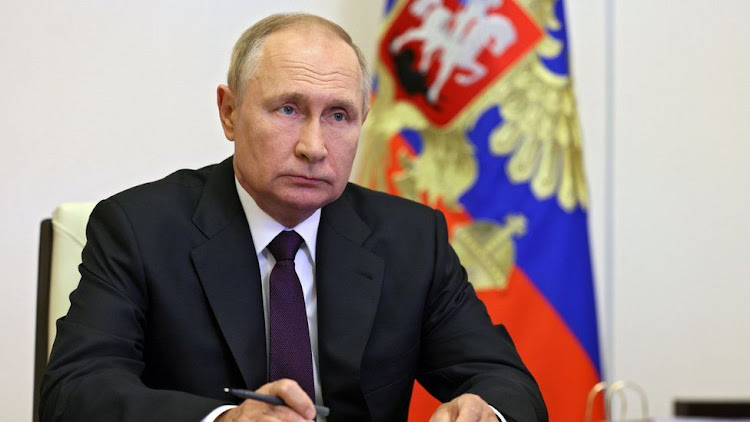 The Kremlin said it was open to negotiations, but not on the West's demand to pull out of Ukraine.

Russia illegally annexed four Ukrainian regions at the end of September, without controlling any of them.

Nine months into its invasion, it has lost more than half the land it seized.

President Biden told reporters on Thursday night that he was ready to meet the Russian leader "if in fact there is an interest in him deciding that he's looking for a way to end the war".

Standing beside him in the White House, France's Emmanuel Macron made clear the two men had agreed they would never urge the Ukrainians to make a compromise "that will not be acceptable for them".

The apparent flurry of diplomatic activity followed months with little sign of enthusiasm for talks. Russia's military has been forced into a retreat in southern Ukraine while launching widespread attacks on civilian infrastructure.

On Friday, German Chancellor Olaf Scholz spoke to President Putin for the first time since September. During the hour-long call, Berlin said the German leader had urged his counterpart to find a diplomatic solution that involved pulling Russian troops out of Ukraine "as soon as possible".

The Kremlin said the German side had pushed for the call, and Mr Putin had urged Berlin to "reconsider its approaches in the context of the Ukrainian events". President Putin had drawn attention to the "destructive line of Western states including Germany" and Kyiv completely rejected the idea of talks, the Kremlin added.

Spokesman Dmitry Peskov told reporters earlier that Mr Putin remained open to talks aimed "to ensure our interests". But Moscow was certainly not ready to accept US conditions: "What did President Biden say in fact? He said that negotiations are possible only after Putin leaves Ukraine."

It complicated the search for a mutual basis for talks, he said, that the US did not recognise "new territories" in Ukraine. At the end of September, President Putin declared four Ukrainian regions as part of Russia, but while Russian forces in eastern Ukraine occupy most of Luhansk, their invasion of Donetsk has stalled and they are on the back foot in Kherson and Zaporizhzhia in the south.

Ahead of Friday's Scholz-Putin call, Russian Foreign Minister Sergei Lavrov complained that European countries had offered nothing concrete so far in terms of mediation.

"Macron, by the way, has been regularly stating over the last two weeks that he was planning a conversation with the Russian president," he was quoted as saying, while adding that Russia had not had any signals via diplomatic channels.

Mr Lavrov named former US Secretary of State John Kerry as the kind of figure who had in the past been able to solve problems and engage in true dialogue.

Italian Foreign Minister Antonio Tajani said on Friday that the time had come to work for a just peace for Ukraine, but it had to come through independence for Kyiv and not its surrender. "The Kremlin must now give concrete signals instead of bombing the population," he told La Repubblica newspaper.

Turkey's Foreign Minister, Mevlut Cavusoglu, said "before next spring" a clearer picture would emerge of how a truce or ceasefire might be established. But he said the situation on the ground had made the task more complicated.

Meanwhile, on a visit to Ukraine, the Archbishop of Canterbury, Justin Welby, said there could be no peace until Russia stopped lying about what it was doing in Ukraine.

Speaking in Bucha, where Russian troops are accused of committing war crimes in the massacre of hundreds of civilians, he said: "There can be no way forward based on lies. There were atrocities committed here."

A senior Ukrainian official said earlier that between 10,000 and 13,000 of its soldiers had been killed since the start of Russia's invasion on 24 February.

Neither Ukraine nor Russia tend to release figures for casualties, and the remarks by presidential adviser Mykhailo Podolyak have not been confirmed by the Ukrainian military.

Last month, the most senior US general, Mark Milley, said around 100,000 Russian and 100,000 Ukrainian soldiers had been killed or wounded since the start of the war.

Speaking to Ukrainian TV outlet Channel 24, Mr Podolyak said Kyiv was "openly talking about the number of the killed". He added that the number of civilians killed could be "significant". He also suggested that up to 100,000 Russian soldiers had been killed since the invasion.

Ukraine war: Can we expect peace talks to begin?

It certainly doesn't mean that high-level peace talks are about to begin.
News
1 month ago
Post a comment
WATCH: The latest news from around the World
by BBC NEWS None
World
02 December 2022 - 22:05
Read The E-Paper