The person also set what appeared to be car tyres on fire, and could be heard chanting slogans into a loudhailer.

• The protester had mounted Sitong bridge in the Haidian district of Beijing, and draped two large banners calling for an end to China's harsh zero-Covid policy and the overthrow of Mr Xi.

• Thursday's protest took place on the eve of a historic Communist Party congress, where Mr Xi is due to be handed a third term as party chief, cementing his hold on power. 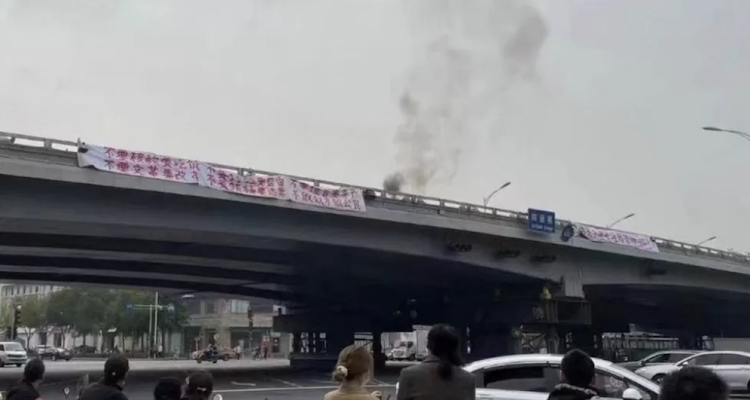 A rare and dramatic protest in Beijing that criticised President Xi Jinping has sparked an online hunt for the mystery protester's identity, as well as praise for the action.

The protester had mounted Sitong bridge in the Haidian district of Beijing, and draped two large banners calling for an end to China's harsh zero-Covid policy and the overthrow of Mr Xi.

While state media have remained silent, photos and videos of Thursday's event have circulated widely online, prompting a swift crackdown by censors on social media platforms and the WeChat app used by most Chinese.

Thursday's protest took place on the eve of a historic Communist Party congress, where Mr Xi is due to be handed a third term as party chief, cementing his hold on power.

The person also set what appeared to be car tyres on fire, and could be heard chanting slogans into a loudhailer.

Reports say one person has been arrested in connection to the protest. Pictures of the incident showed police officers surrounding the person, who wore a yellow hard hat and orange clothing.

Many have praised the lone protester's actions, calling them a "hero" and referring to them as the "new Tank Man" - a reference to the unknown Chinese man who stood in front of tanks during the 1989 Tiananmen protests. 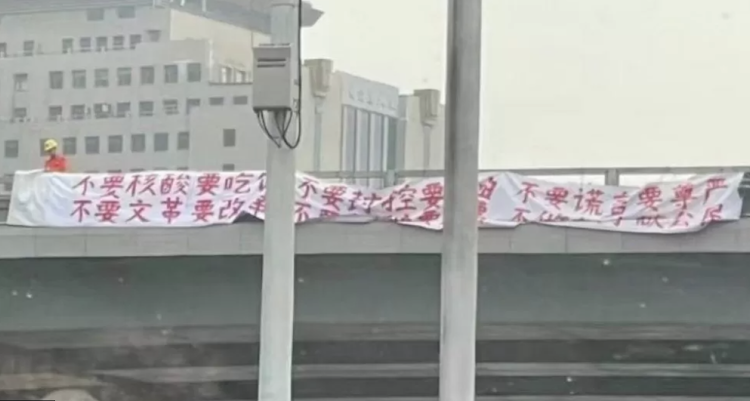 The protester is believed to be the man dressed in an orange worksuit
Image: TWITTER

Online sleuths have attempted to track the person down, focusing on a Chinese researcher and physicist hailing from a village in the northern province of Heilongjiang. A BBC check with village officials confirmed that a man with that name used to live there.

He had posted what appeared to be a manifesto on popular research site ResearchGate. This was later taken down, though others have since uploaded copies of it.

In the 23-page document, he called for a strike and acts of civil disobedience - such as smashing Covid testing stations - on Sunday. This was to stop "the dictator Xi Jinping from illegally continuing in office, so that China can embark on the road to democracy and freedom".

Some Chinese have congregated on the man's two Twitter accounts, posting what they claimed were his pictures and writing hundreds of grateful messages.

"You're a hero and you have my respect," wrote one person, while another said: "Salute to the hero of the people! Hope you can safely return!"

The man's name is among material related to the protest that has been censored online. No references to the incident could be found on Chinese social media site Weibo as on Friday morning.

Footage and pictures of the protest and related keywords including "Haidian", "Beijing protester" and "Sitong bridge" were quickly scrubbed. Phrases tangentially related to the protest, including "bridge" and "hero", also returned limited results. 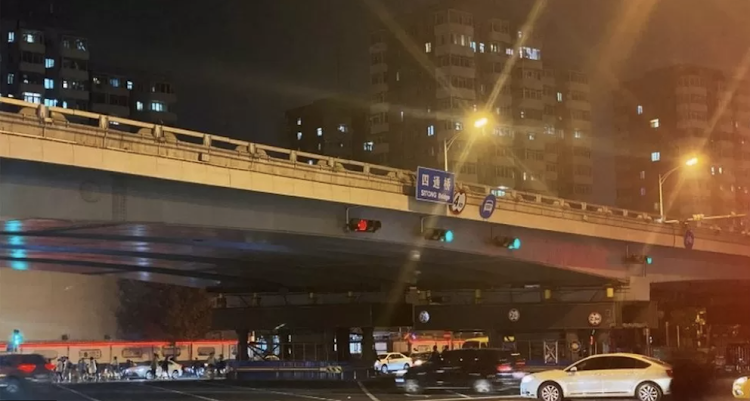 By Thursday evening all traces of the protester's actions had been removed
Image: REUTERS

Although Chinese media have not reported on the incident, former Global Times editor Hu Xijin appeared to refer to it when he tweeted on Thursday evening that the "vast majority" of Chinese people supported Communist Party rule and were "hoping for stability and opposing upheaval".

Many Chinese have reported that their accounts on social media platforms or WeChat - China's biggest messaging app - had been temporarily banned after they shared pictures of the protest or posted messages alluding to the protest.

The BBC has reached out to Tencent, WeChat's parent company, for confirmation.

Such dramatic protest - and public criticism of the government - is rare in China, though China's tough "zero Covid" policy has fuelled growing public frustration.

In 2018 a woman who defaced a poster of Mr Xi, saying she opposed his "tyranny", was later admitted to a psychiatric hospital.

The Beijing protester's actions come at an especially politically sensitive time, with thousands of police officers expected to be mobilised across the capital ahead of the week-long party congress.