Blazes in Spain, Portugal and Greece have forced thousands more to flee.

• Record temperatures are also expected in parts of the UK, which has its first ever red extreme heat warning in place.

• Wildfires in France in recent days have forced over 16,000 people to flee the area, with emergency shelters set up for evacuees. 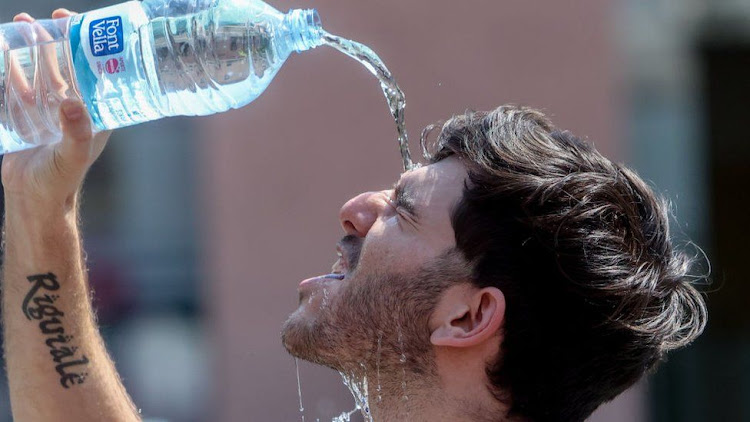 Soaring temperatures have gripped parts of Europe, which has barely recovered from its last heatwave.
Image: BBC

Western France is facing a "heat apocalypse", experts have warned, as extreme temperatures continue to hit much of Europe.

Temperatures could reach record levels in 15 regions of the southwest, with firefighters battling wildfires and thousands forced to evacuate.

Blazes in Spain, Portugal and Greece have forced thousands more to flee.

Record temperatures are also expected in parts of the UK, which has its first ever red extreme heat warning in place.

Wildfires in France in recent days have forced over 16,000 people to flee the area, with emergency shelters set up for evacuees.

Gironde, a popular tourist region in the southwest, has been hit particularly badly, with firefighters battling to control fires which have destroyed over 14,000 hectares (34,000 acres) of land since last Tuesday.

Jean-Luc Gleyze, president of the Gironde region, told the BBC the fires had continued to grow in La-Teste-de-Buch and Landiras because of the hot and windy weather, making it difficult for firefighters to contain them.

"They have to fight against this fire which is growing and growing, sometimes getting very, very high," he said.

More villages will have to be evacuated, he added.

The heatwave has prompted warnings of what one meteorologist described to AFP news agency as "an apocalypse of heat" in some areas of the southwest.

In Spain and Portugal, more than 1,000 deaths have been attributed to the heat in recent days.

In the central province of Zamora, where a fire has been blazing since the weekend, the body of a shepherd was found in the Sierra de la Culebra mountain range. He is the second fatal casualty of the Zamora fire after a 62-year-old firefighter was killed on Sunday.

In the north-eastern region of Catalonia, fire came right up to the house of Mercedes Pino near Pont de Vilomara.

"I was in bed and through the window I saw a very red light," she told Spanish media. "I ran as fast as I could to the door and I saw a flame burning a caravan we have in front of the door."

Wildfires have also broken out in the Mijas hills near Malaga, as well as Castilla y León, Galicia and Extremadura. Spanish Prime Minister Pedro Sanchez is due to visit the latter region on Monday.

Fires in Portugal have been largely contained, despite temperatures there hitting 47C (116F) on Thursday - a record for July.

But one third of the mainland still remains at extreme risk of fire, according to the national meteorological office IPMA. This is due to severe or extreme drought conditions virtually everywhere, the BBC's Portugal correspondent Alison Roberts says.

After the trauma of June 2017, when 66 lives were lost in fires, emergency and civil defence commanders' top priority has been to act early to protect life, leading to the evacuation of over 860 people from their homes across the north and south of the country, she adds.

The heatwave is the second to hit parts of southwest Europe in recent weeks.

Heatwaves have become more frequent, more intense, and last longer because of human-induced climate change. The world has already warmed by about 1.1C since the industrial era began and temperatures will keep rising unless governments around the world make steep cuts to emissions.

Enrique Sanchez, the Dean of the Faculty Environmental Sciences and Biochemistry at The University of Castilla-La Mancha in Spain told the BBC that heatwaves would soon become the norm.

"In the long term, I mean in the following years, there is no way that the temperatures are going to [not] increase, so heat wave events will become more and more common... all along Europe," he said.

Thousands have been evacuated in southwest France and Spain.
News
2 months ago

It means there is a risk to life and daily routines will need to change.
News
2 months ago

UK may have hottest day on record with 41C forecast

The current highest temperature in the UK is 38.7C, in Cambridge in 2019.
News
2 months ago