At least 18 people have died in a missile strike on a mall believed to have had about 1,000 people inside.

• Some 1,000 civilians were estimated to be inside the busy mall at the time of the attack at around 15:50 (12:50 GMT), President Volodymyr Zelensky said.

• The leaders of the G7 group of richest nations - who are meeting in Germany - condemned the attack as "abominable". 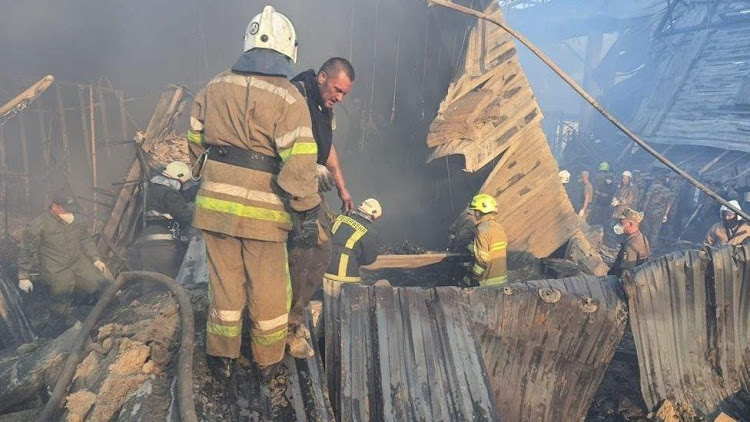 Hundreds of firefighters were involved in putting out the fire, which burned for several hours
Image: UKRAINE EMERGENCY SERVICES/BBC

At least 18 people have died in a missile strike on a shopping centre in the Ukrainian city of Kremenchuk.

Some 1,000 civilians were estimated to be inside the busy mall at the time of the attack at around 15:50 (12:50 GMT), President Volodymyr Zelensky said.

The leaders of the G7 group of richest nations - who are meeting in Germany - condemned the attack as "abominable".

"Indiscriminate attacks on innocent civilians constitute a war crime," they said in a joint statement.

Russia has been blamed for the attack, which also injured at least 59 people, and there are fears the death toll will continue to rise.

Pictures online showed the building engulfed in flames and thick black smoke billowing into the sky.

Ukraine's President Zelensky described the attack as one of the "most brazen terrorist acts in European history".

He said the mall had no strategic value to Russia, and posed no danger to its forces - "only the attempt of people to live a normal life, which so angers the occupiers".

"Only totally insane terrorists, who should have no place on earth, can strike missiles at such an object," he added.

The Kremlin is yet to respond to the attack, and has always denied targeting civilians.

The local governor Dmytro Lunin described the attack as a crime against humanity, writing on Telegram that is was "an obvious and cynical act of terror against the civilian population".

Authorities say 440 people from emergency services are working on location, including 14 psychologists brought in to support those affected.

Photos from the scene show the blackened and charred shell of the building with the roof caved in.

In one video taken shortly after the strike a man can be heard calling out: "Is anybody alive… anybody alive?" Soon after ambulances arrived to take the injured to hospital.

But there are still people missing, and as night fell family members gathered at a hotel over the road, where rescue crews have set up a base to wait for any news. Lights and generators have been brought to the site so crews can continue the search overnight, Reuters news agency reports.

The central-eastern city of Kremenchuk is located about 130km (81 miles) from Russian areas of control.

The Ukrainian Air Force command said the shopping centre was struck by Kh-22 missiles launched from Tu-22M3 long-range bombers - however the BBC has been unable to verify this.

"The centre was just destroyed. Before we had strikes on the outskirts of the city, this time around, this is the centre of the city," an eyewitness, Vadym Yudenko told the BBC.

"I'm out of words," he added. "I did not expect that something like this could happen in my town."

The missile strike took place as the leaders of Canada, France, Germany, Italy, Japan, the US and UK gathered in Germany for the G7 summit to discuss - among other things - toughening sanctions against Russia.

In addition to strongly condemning the attack, a joint statement issued by the Western leaders vowed to "continue to provide financial, humanitarian as well as military support for Ukraine, for as long as it takes."

Kremenchuk, in the Poltava province of Ukraine, is one of Ukraine's largest an industrial cities, with a population of nearly 220,000 people in a 2021 census.

It is not the first time the city has been hit by missiles - there was one strike recorded in April and another 10 days ago at a nearby oil refinery.

Speaking after the shopping mall attack, US Secretary of State Antony Blinken called it the "latest in a string of atrocities", while UK Prime Minister Boris Johnson said it would strengthen the resolve of Western allies to stand by Ukraine.

"This appalling attack has shown once again the depths of cruelty and barbarism to which the Russian leader will sink," Mr Johnson said.