A short circuit is thought to have started the fire.

• Two brothers who owned a CCTV manufacturing company which was housed in the building have been arrested in connection with the incident, according to authorities.

• More than 70 people were inside when the fire started and witnesses said some jumped out of windows to escape. 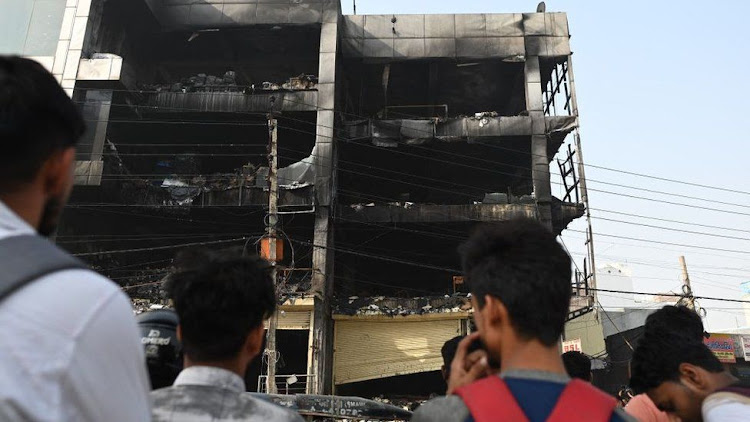 At least 27 people have been killed and others are missing after a fire swept through a four-storey office building in Delhi.

More than 70 people were inside when the fire started and witnesses said some jumped out of windows to escape.

Women made up the majority of the office's workers. The BBC found distraught family members waiting outside a local hospital for news.

A short circuit is thought to have started the fire.

Two brothers who owned a CCTV manufacturing company which was housed in the building have been arrested in connection with the incident, according to authorities.

Police are also seeking to talk to the owner of the building.

One of the women missing is 19-year-old Pooja, who is her family's main bread winner.

At the Sanjay Ghandi Memorial Hospital in western Delhi, her 14-year-old sister Moni told the BBC her and her mother had run to the hospital as soon as they had heard about the fire.

"She had gone to office at nine in the morning. She worked as data entry operator. She didn't have her phone, so, she couldn't give us a call."

Her mother stood completely silent next to her younger daughter, unable to speak. Moni asked how her family would survive without her sister if she was not found alive.

There were more than 100 others like Pooja in the office on Friday.

Ismail ran to the burning building after his 21-year-old sister, Muskan, phoned him from inside.

"I saw her trapped in the building as I reached there. I told her to escape by the rear door," he said. But he has not heard from her since.

Ismail and his relatives have gone looking for her in every hospital. He even went into the burnt-out building after the fire was extinguished, injuring his hand on broken glass, in the hope of finding her.

"We are tired now searching for her but getting no clues. We wish that we could have saved her," Ismail said.

'There was no door to escape'

Sunita, another woman waiting at the hospital, said her 20-year-old daughter Sonam was missing.

Bursting into tears, she said that she had searched everywhere for her daughter - who worked on the second floor - but had been also unable to find out what had happened to her.

Many of the office workers were attending a conference on the second floor when the fire broke out. It is reportedly where most of the bodies were found.

"When the building caught fire, there was no door to escape," she said. "How could my daughter save herself?"

Two engineers who were in the office said the building's only exit was blocked by rubbish and they had had to jump from the first floor to escape the raging fire.

They said the exit had immediately filled up with smoke and leaping flames, and their only option had been to break the glass of the first-floor windows and jump to the ground.

Delhi's Chief Minister Arvind Kejriwal said that DNA tests would be used to identify the bodies, which had been "charred beyond recognition", the Hindustan Times reported. Seven bodies have so far been identified, said police.

A local official, Jogi Ram Jain, said preliminary reports suggested a short circuit had caused the fire and that the building did not have proper fire safety certification.

Fires are common in India, with building safety laws often ignored by builders and residents.

In 2019, a large fire swept through a bag factory in the capital, killing 43 workers.