After weeks of isolated compound lockdowns, the city of 25 million has been split into two.

• Earlier this week those living in Shanghai's eastern half were told to stay home, with the western half due to enter a lockdown on Friday.

• China's zero-Covid strategy has been increasingly challenged by the highly infectious Omicron variant. 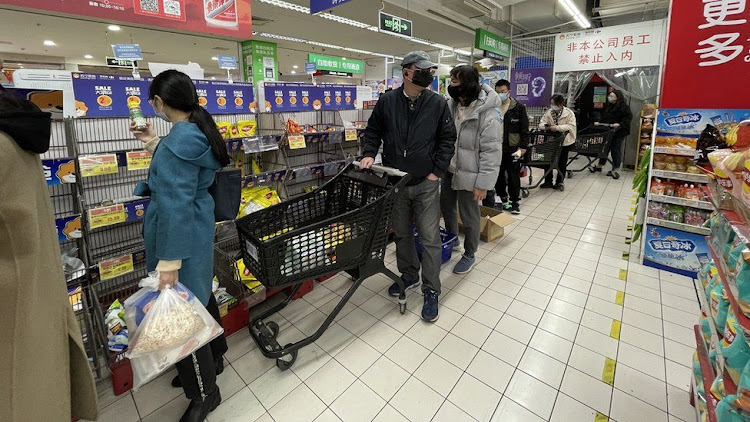 Lockdown restrictions in Shanghai have resulted in residents thronging supermarkets to stock up on essential supplies.
Image: EDWARD LAWRENCE/BBC

Residents in Shanghai are scrambling to stock up on supplies while thousands quarantine in offices, as a lockdown rolls out in the divided city.

After weeks of isolated compound lockdowns, the city of 25 million has been split into two.

Earlier this week those living in Shanghai's eastern half were told to stay home, with the western half due to enter a lockdown on Friday.

The move comes as the city battles a surge in Omicron Covid cases.

The city has reported around 20,000 Covid-19 infections since 1 March, registering more cases in four weeks than in the previous two years of the pandemic.

China's zero-Covid strategy has been increasingly challenged by the highly infectious Omicron variant.

Officials in China's cosmopolitan financial capital had earlier attempted to keep the city running by limiting lockdowns to select neighbourhoods or buildings.

But on Sunday authorities announced a mass lockdown that saw the city being split along the Huangpu River.

Residents living in the Pudong area, on the river's eastern bank, were told to stay at home for four days starting on Monday. Puxi, on the western bank, will enter lockdown on Friday.

Mass testing is also being carried out to screen all of Shanghai's residents for the virus.

Authorities on Tuesday sought to quash the speculation with a statement calling it "pure rumours".

But several residents living in western districts received notice on Tuesday from their housing committees that they would be stopped from leaving their compounds for the next seven days, reported Reuters.

Quarantining at the office - and the gym

Ahead of Monday's lockdown, more than 20,000 financial services staff were summoned back to their offices in the financial Lujiazui district and ordered to spend the rest of the lockdown there in an attempt to keep business operations running smoothly, according to officials.

Others have been forced to hunker down in more unusual locations.

One woman's account went viral when a lockdown in her community was announced on 11 March while she was at the gym. For four days, she was among dozens of people who had to quarantine at the fitness centre, sleeping on yoga mats and quilts provided by staff and eating food delivered to the gym.

The woman told news outlet The Paper that she spent the whole period exercising, and left the gym about 3lb (1.5kg) lighter. Her experience echoed a widely-reported case earlier this month where a woman in Zhengzhou had to quarantine for several days at a hot pot restaurant.

But the restrictions have also led to some frayed nerves.

Widely-circulated videos this week showed a rare public protest at one compound in Shanghai. Residents had complained of low food supplies after being stuck indoors for nearly a month.

Some have also taken to social media platform Weibo asking for help as they were not able to get medicine or treatment due to the lockdown.

Those diagnosed with Covid have been sent to live in warehouses and exhibition halls converted into mass quarantine centres, even if they are asymptomatic, and some have complained about the basic living conditions. One journalist quarantining at the World Expo centre said they had Portaloos for toilets and no shower facilities.

Shanghai officials said they are planning a series of relief measures for businesses, reassured residents they would attend to their medical needs - and also pleaded for understanding.

On Wednesday morning, they released a statement detailing testing measures, ending with the line: "Lastly, we thank everyone again for your understanding, support, and cooperation!"