"We should all be on the lookout", the White House has said.

The UK Ministry of Defence said in a tweet that Russia had used thermobaric rockets in Ukraine. These rockets are also known as vacuum bombs because they suck in oxygen from the surrounding air to generate a high-temperature explosion. 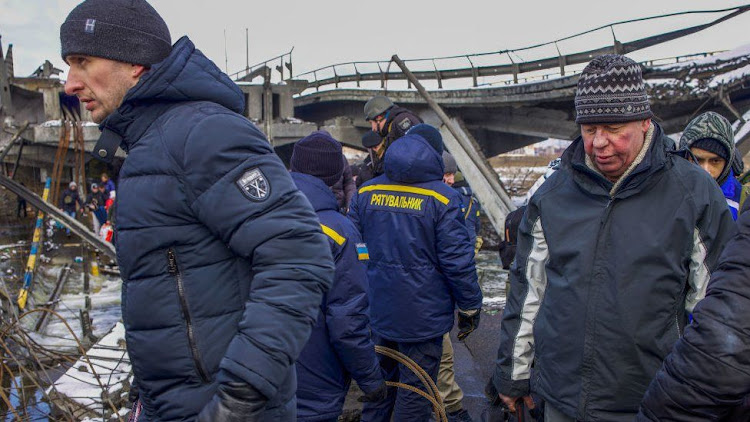 Russia has been shelling Ukrainian cities, including Irpin, near the capital Kyiv
Image: BBC

Russia could be planning a chemical or biological weapon attack in Ukraine - and "we should all be on the lookout", the White House has said.

She called the false claims an "obvious ploy" to try to justify further premeditated, unprovoked attacks.

They said they were "very concerned" about the risk the war could escalate, and particularly the possibility of Russia using non-conventional weapons.

"We've got good reason to be concerned," said one Western official.

They said this was partly because of what had been seen in other places where Russia has been engaged - notably Syria where chemical weapons were used by its allies.

Ms Psaki said: "We should all be on the lookout for Russia to possibly use chemical or biological weapons in Ukraine, or to create a false flag operation using them - it's a clear pattern."

Earlier on Wednesday, the UK Ministry of Defence said in a tweet that Russia had used thermobaric rockets in Ukraine. These rockets are also known as vacuum bombs because they suck in oxygen from the surrounding air to generate a high-temperature explosion.

This makes them more devastating than conventional explosives of a similar size, and can have a terrible impact on people caught in their blast radius.

In a subsequent update, the ministry said it was likely "experienced mercenaries" from Russian private military companies associated with the Kremlin were deploying to fight in Ukraine.

The update added Russian mercenaries have been accused of committing human rights abuses in Africa and the Middle East, including in Syria, Libya and the Central African Republic.

The fears around chemical weapon use were borne from Russian claims potentially "setting the scene" for some kind of "false flag" claim, Western officials said.

In a tweet, the Russian Embassy referred to claims that "recently found documents" showed components of biological weapons were made in Ukrainian laboratories - with funding from the US Department of Defense.

The US dismissed the claims, saying it was the "kind of disinformation operation we've seen repeatedly from the Russians over the years in Ukraine and in other countries".

Russian officials and media have also claimed in recent days that Ukraine was planning to build a so-called dirty bomb - which disperses radioactive material.

Some believe Moscow is pushing these claims to come up with a justification for its own public about why it invaded Ukraine. But Western officials also fear they could be used as the basis for a "false flag" event.

The Western official said similar stories had come from Russia before their use in Syria.

There were "other indications as well", they said - likely referring to some kind of intelligence. "It's a serious concern for us."

Russia is also accused of using nerve agents - a type of chemical weapon - in attempted assassinations like that of Sergei Skripal in Salisbury in 2018 and against opposition figure Alexei Navalny in Russia in 2020.

The global watchdog that oversees the Chemical Weapons Convention - the OPCW - describes a chemical weapon as a chemical used to cause intentional death or harm through its toxic properties.

Their use is banned under international humanitarian law regardless of a valid military target because their effects are indiscriminate by nature and designed to cause superfluous injury and unnecessary suffering.

WATCH: Latest videos on Russia Ukraine war
Post a comment
WATCH: The latest news from around the World
by BBC NEWS None
World
10 March 2022 - 07:13
Read The E-Paper