Philippines' Duterte to run for Senate in 2022

Duterte, 76, had previously said he would run for the country's second-highest office

•University of the Philippines political science professor Jean Franco said Duterte was running for the Senate because he was "scared of the lawsuits and the ICC".

•Duterte, 76, had previously said he would run for the country's second-highest office.

Philippines President Rodrigo Duterte on Monday filed to contest the Senate elections next year, seeking a way to remain in politics while facing an international probe into his deadly drug war.

Duterte, who is constitutionally barred from seeking a second six-year term, submitted his candidacy at the Commission on Elections office, minutes before a deadline to join the race.

A lawyer submitted the paperwork on behalf of the president, according to documents seen by AFP, quelling speculation he would run for vice president -- the same post his daughter, Sara, is contesting.

Duterte, 76, had previously said he would run for the country's second-highest office, before changing his mind and announcing plans last month to retire from politics -- which was met with deep scepticism among analysts.

Duterte made a similar declaration in September 2015, saying he "will retire from public life for good", only to announce a presidential bid two months later.

University of the Philippines political science professor Jean Franco said Duterte was running for the Senate because he was "scared of the lawsuits and the ICC".

As a senator, Duterte would be shielded from arrest for crimes carrying a jail sentence of "not more than six years" while the Congress was in session, Franco said, citing the country's Constitution.

She added Duterte also wanted to "have bargaining power in the next administration".

Carlos Conde, Human Rights Watch senior researcher for the Philippines, told AFP Duterte was "clearly scared" and "wants to cover all the bases" to ensure he would be protected from prosecution.

"Even with his daughter running for vice president and his trusted aide Bong Go running for president –- those are apparently not assurance enough that he can attain his objective after his term ends," Conde said. 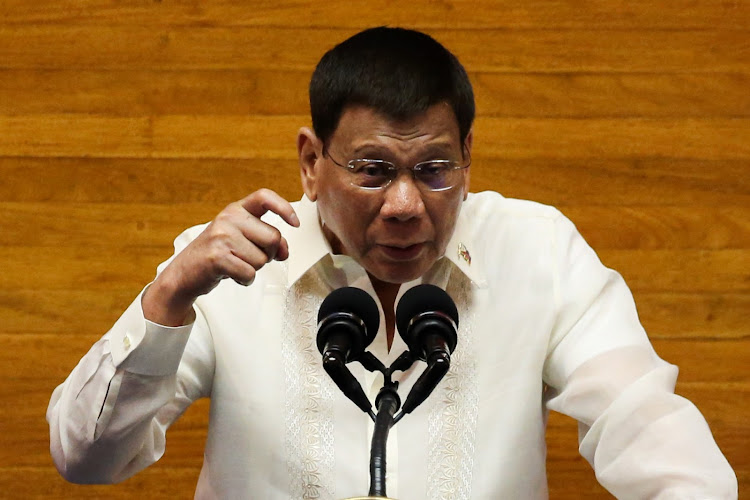 Philippine President Rodrigo Duterte speaks during the annual state of the nation address at the House of Representatives in Manila on July 26, 2021.
Image: POOL/AFP

Sara Duterte had been widely expected to seek the presidency in a bid to succeed her father, and potentially protect him from criminal charges in the Philippines and from the ICC investigators.

But on Saturday she filed for the vice presidential race and that appeared unchanged by Monday's 5:00 pm (0900 GMT) deadline.

Her tilt for the second-highest office was immediately endorsed by the party of presidential front runner Ferdinand Marcos Jr, the son and namesake of the former dictator, to be his running mate in the poll.

Sara's decision to run for vice president leaves Marco Jr in a strong position in the presidential race.

The elder Duterte has been an ally of the Marcos family.

Twelve Senate seats will be up for grabs on May 9 when the election is due to be held.

Duterte is not the first president in the Philippines to seek to stay in politics, said Mark Thompson, director of the Southeast Asia Research Centre at the City University of Hong Kong.

"Given the one-term limit (as president) it's an opportunity to be in the national spotlight," he added.