•Power was cut to more than 40,000 homes and the island's high speed rail service was suspended north of the city of Taichung, local media reported. 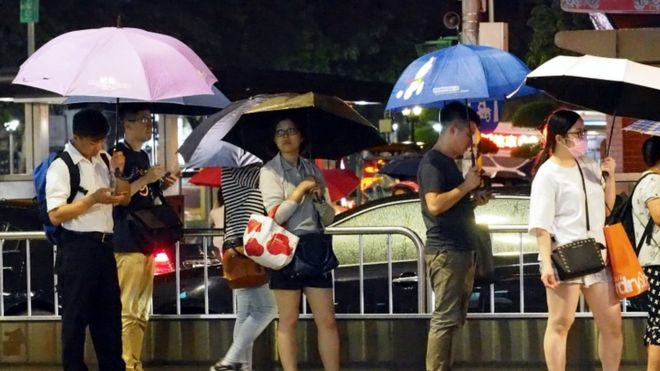 Taipei, the capital of Taiwan, has been hit by heavy rain
Image: /BBC

Chinese authorities have declared a red alert as a powerful typhoon heads towards the eastern coast.

Typhoon Lekima is currently battering Taiwan with winds of more than 190km/h (120mph) and is due to make landfall in China's Zhejiang province on Saturday.

Emergency teams have been deployed to the region to guide relief work, China's emergency ministry said.

Thousands of people further up the coast in Shanghai have been warned to prepare to evacuate.

Flood warnings have been issued for eastern sections of the Yangtze River and the Yellow River until Wednesday. The provinces of Jiangsu and Shandong are also on alert.

Cruise liners have been told to delay their arrival in Shanghai and some train services have been suspended over the weekend.

Beijing has also cancelled some trains heading to and from the Yangtze delta region.

Lekima is one of two typhoons in the western Pacific at the moment. Further east, Typhoon Krosa is spreading heavy rain across the Northern Mariana Islands and Guam. It is moving north-west and could strike Japan some time next week, forecasters said.

Lekima, which is the ninth typhoon so far this year, strengthened into a super typhoon late on Wednesday.

It was passing the north of Taiwan on Friday, causing flight cancellations and the closures of schools and offices.

Power was cut to more than 40,000 homes and the island's high speed rail service was suspended north of the city of Taichung, local media reported.

The huge storm came a day after eastern Taiwan was rattled by a 6.0 magnitude earthquake. Experts said the risks of landslides triggered by the tremor were made more likely by the typhoon dumping up to 900mm (35 inches) of rain on Taiwan's northern mountains.

China's weather bureau said Lekima was expected to have weakened by the time it made landfall. The country has a four-stage colour-coded warning system, with red representing the most severe weather.