Indonesian woman caned in public for having sex outside wedlock

• The terrified woman was seen kneeling on a stage 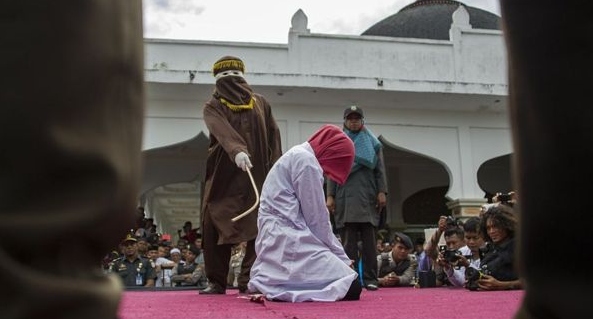 A file photo of a woman being caned publicly previously
Image: BBC

A woman was on Monday caned in front of delighted spectators as a punishment for having sex outside wedlock in Indonesia.

The terrified woman was seen kneeling on a stage, while an official holding a cane prepared to flog her and a crowd gathered to witness the Sharia law flogging.

The humiliating punishment was carried out in the country's arch-conservative Aceh province, the only one which observes Sharia criminal law.

An official known as 'algojo' wore a masked hood and a robe to cover their face and body completely as they brandished the weapon in the city of Banda Aceh.

The woman kept her head down as she was escorted by two other women and prepared to face the punishment for having sex outside wedlock.

Many of the spectators close to the stage held up their mobile phones, apparently taking pictures or video footage of the act.

Rights groups slam public caning as cruel, and Indonesia's President Joko Widodo has called for it to end.

But the practice has wide support among Aceh's mostly Muslim population - around 98 per cent of its five million residents practise Islam.

A 100-stroke punishment is reserved for the most severe crimes and offenders may also be sentenced to prison time.

In 2018, Aceh said that flogging would be carried out behind prison walls in future, but some local governments have continued public whippings.

The same district made headlines last year when it banned men and women from dining together unless they were married or related.