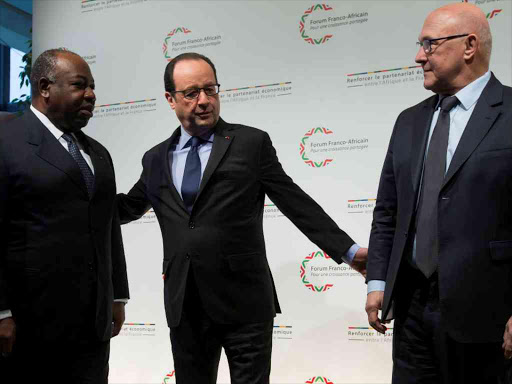 In the heyday of former President Omar Bongo,

and its oil wealth were a central pillar of 'La Francafrique', a shadowy network that enabled France's troops to defend African autocrats in exchange for juicy contracts for French companies.

Thanks partly to this web of diplomacy and trade backed by French firepower, Bongo stayed in office for 42 years before his death in 2009. France's energy firms, meanwhile, had undisputed claims to some of the continent's richest oil fields.

But the days of France throwing its weight behind a leader for commercial favours may be numbered, which presents a challenge for French businesses in West Africa, a largely Francophone region because of its colonial past

Ali Bongo, the son of the late president, was inaugurated for a second term on Tuesday after an election whose credibility EU observers seriously called into question.

France's position has been clear since the August 27 poll: it has "doubts" about its credibility, so it won't endorse Bongo as the winner against his main opponent Jean Ping - a clear message that Bongo's half-century family dynasty can no longer count on support from

Yet his father used to win elections with so little credibility that in 1986 he got over 99 per cent of the vote, and four years later, when protests erupted, French troops stepped in to quell them.

France's Elf won every oil licence in a bidding round shortly after, according to British journalist Nicholas Shaxson in his 2008 book Poisoned Wells.

"That period is behind us," French Foreign Minister Jean-Marc Ayrault told the France 2 TV channel this month.

"We do not want ... to interfere in countries' internal affairs," he said, articulating a trademark policy of Socialist President Francois Hollande, who four years ago pledged that "the era of La Francafrique is over" while in Senegal.

A French diplomat told Reuters that current thinking in the French government was that Paris could no longer automatically back an ally, even when trade interests are at stake. If the leader's popularity fades, in elections or on the streets, France will distance itself.

"The era of us picking someone and saying 'you're the next president' is over," another French diplomat said, even when France has "specific interests in one country or another".

"The time when the French intervened to help Omar Bongo ... that was the old La Francafrique, looking after your chums," he said, an approach that was now "basically impossible".

In Burkina Faso, where crowds ousted Blaise Compaore in 2014 as he tried to extend his 27-year rule, France backed away from its former friend, having quietly told him it was a bad idea.

"There really has been a shift to the idea that if there are to be negotiations with African partners they have to go through official channels," said Aline Leboeuf, a researcher at the Institute Francais.