He anticipates to harvest 10,000 kilos from 12 acres, earning Sh1 million

• “I end up spending a lot of money on controlling weeds and the thrips. But, I must say the returns are good, especially now when there is a shortage of onions,” Marwa said.

• The 29-year-old graduated with a Bachelor of Finance from Kisii University and went to Hola in 2018, in search of a job. 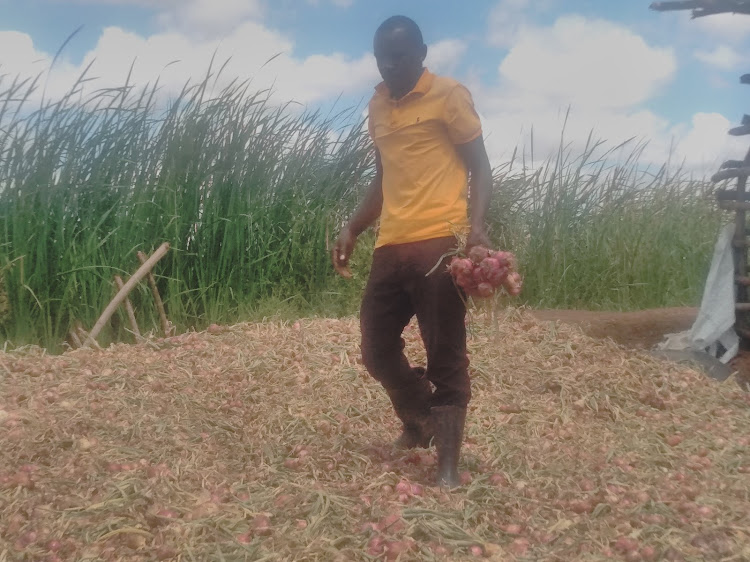 Peter Marwa has embraced horticulture and is making a fortune from growing onions.

The 29-year-old graduated with a Bachelor of Finance from Kisii University and went to Hola, Tana River county, in 2018 in search of a job.

However, when he could not get one, Marwa decided to start farming as there was available land under irrigation.

Since then, he has been growing horticultural crops like watermelons, onions and groundnuts.

Hola irrigation scheme is the oldest National Irrigation Authority scheme, having started in 1953.

For long, the main crop was cotton but with time farmers diversified to horticulture, farming watermelons and onions due to availability of water.

Marwa is a farmer in Area Six of Hola irrigation scheme. He has planted 12 acres of onions and is anticipating to harvest about 10 tonnes.

He told the Star during a visit to his farm that he started land preparation last year and had a nursery prepared so that he could plant onions in 15 acres.

“I used about 15 kilos of onion seeds in the nursery, but the 2021 October-November-December short rains eroded some of the seedlings. Instead of planting 15 acres, I ended up doing 12 acres under onions,” Marwa said.

He says the scaling down was a big loss for him as he had spent Sh6,000 to buy a kilo of onion seeds.

Nevertheless, Marwa did not lose hope and continued to manage the nursery the best way he could. He was able to salvage most of the seedlings for transplanting in the 12 acres.

Marwa however says one of the biggest challenge is pest and weed control.

“I end up spending a lot of money on controlling weeds and the thrips. Though I must say the returns are good, especially now when there is a shortage of onions,” he said.

According to agronomists, thrip is the most destructive pest in onion farming.

Other pests include nematodes, the onion fly, stem and bulb eelworm. The crop is also prone to foliar diseases and bulb rots, which is a bacterial disease that reduces onion bulb quality. 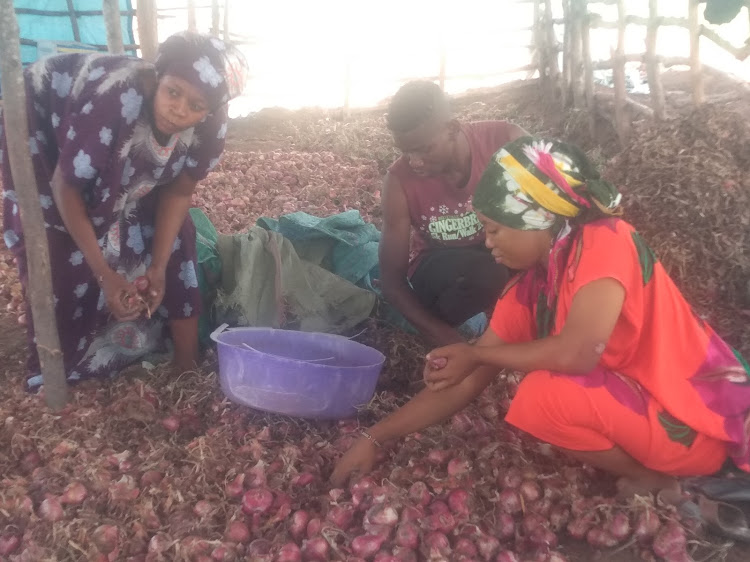 DEMAND: Local traders at Hola town sort out onions to sell to the market. A kilo of onions at the farm gate is selling at Sh100.
Image: AGATHA NGOTHO

Marwa says he targets to sell his produce to the local market in Hola and in Nairobi.

“Already, local traders have started coming to buy onions in the farm. I am selling a kilo at Sh100 at the farm gate and Sh120 in the market,” he said.

He is anticipating to harvest about 10,000 kilos of onions, which will be equivalent to Sh1 million.

Marwa said his cost of production is about Sh50,000 per acre inclusive of water charges of Sh3,400 per season and the cost of labour and chemicals for weed and pest control.

He has already prepared a nursery for the next planting season. The onions will be ready for transplanting in the next one and half months.

“Residents used to buy onions from far markets but since we started growing onions, I am able to supply to the local market. I plan to sustain that market even as I explore other bigger markets,” Marwa said. 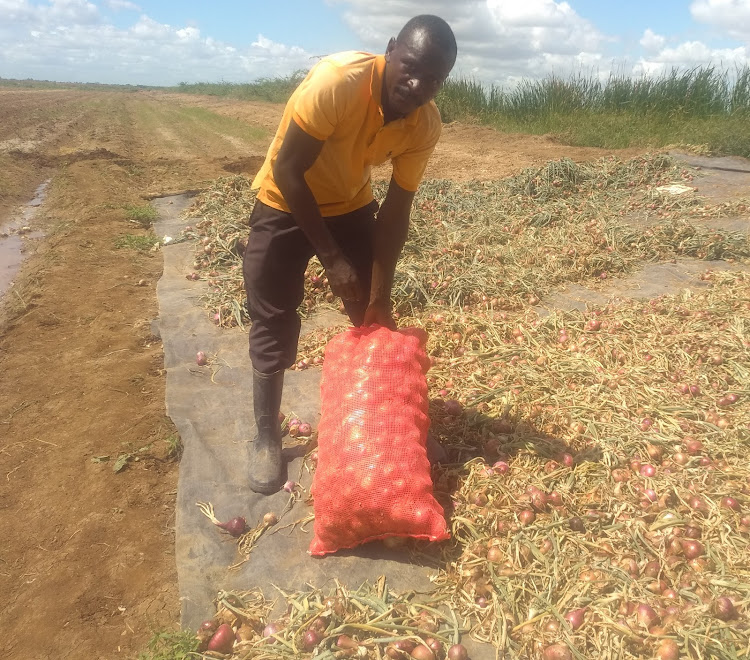 BIGGER MARKETS: Peter Marwa with a 25kg bag of onion, which he is selling at Sh2,500.
Image: AGATHA NGOTHO

James Kirimi, a manager at Hola irrigation scheme, said many farmers have embraced horticulture with the aim of diversifying from the traditional crops because the returns are higher.

“The biggest challenge in horticulture farming is the cost of seeds. Hybrid seeds are expensive coupled with the cost of pest management chemicals, and emergence and post emergence herbicides for weed management," Kirimi said.

He said horticulture is demand driven and farmers sell their crop depending on their target market.

“Here you do not rely on rain farming but you do it at your own convenience, targeting to harvest at a specific period when the market will be receptive.

"Currently, there is shortage of onions in the market. You will find that on farm prices are high and going at Sh100 per kilo. In the market it is going at Sh120 per kilo,” Kirimi said.

The manager said onions are high return crops but require serious management unlike other crops.

“From the nursery, the onion takes about one and half months to be ready for transplanting. At the nursery, a farmer must ensure proper management so that you will not transfer the pest from the nursery to the farm. This increases the level and cost of management,” he said.

Hola irrigation scheme collapsed in 1989 when Tana River changed its course, but was revived in 2009. The rehabilitation was funded by Arab Bank for Economic Development in Africa and the Government of Kenya.

The scheme has a gazetted area of 12,630 acres and the current area utilised under irrigation is 5,000 acres with 1,450 registered farmers.

A population of about 6,000 persons depend on this project for their livelihood.

Kirimi said there are elaborate plans to put the entire scheme under production.

“Currently, 1,650 acres are under commercial maize, 850 under rice, 250 under green grams, 80 under pasture and 100 under horticultural production, totaling to 2,930. Land preparation is ongoing for more cropping in the remaining acres,” he said. 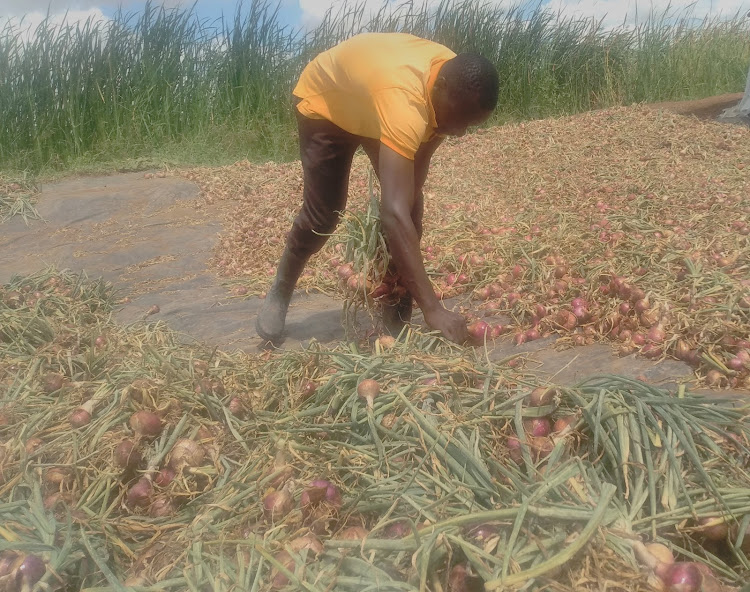 ONION SHORTAGE: Peter Marwa, a 29-year old farmer from area six of Hola irrigation Scheme in Tana River has planted 12 acres of onions and is anticipating to harvest about 10,00 kilos.
Image: AGATHA NGOTHO 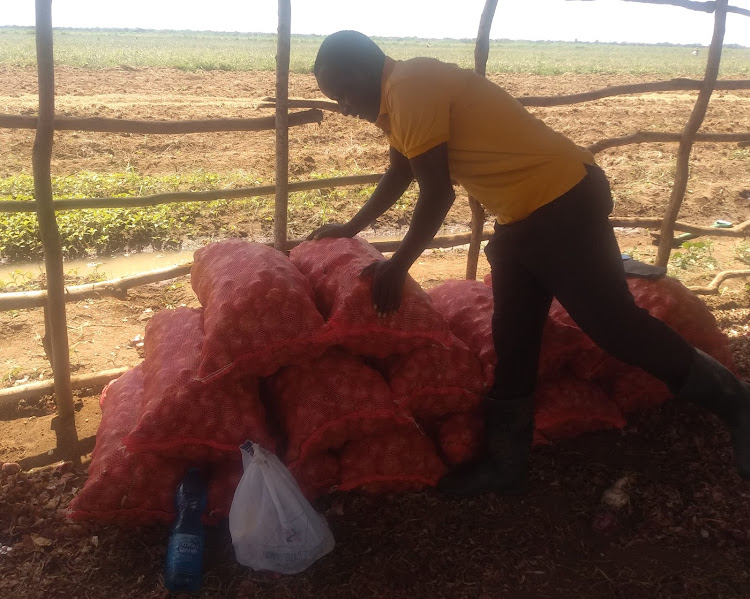 BUMPER HARVEST: Peter Marwa packs 16 bags of onions of 25 kgs each to sell at Masalani market in Hola town. A 25 kg bag is selling at Sh2,500 each.
Image: AGATHA NGOTHO

Kazuzi pays out Sh31 million in bonus to farmers

Agribusiness firm-Kakuzi Plc has paid out Sh31 million in bonus to avocado farmers in Murang'a, who are part of its 3,500 strong smallholder ...
Business
6 months ago

Kenya has been ranked one of the top tourist destinations in the world.
Business
2 months ago
“WATCH: The latest videos from the Star”
by AGATHA NGOTHO Science Writer
Star Farmer
16 May 2022 - 23:00