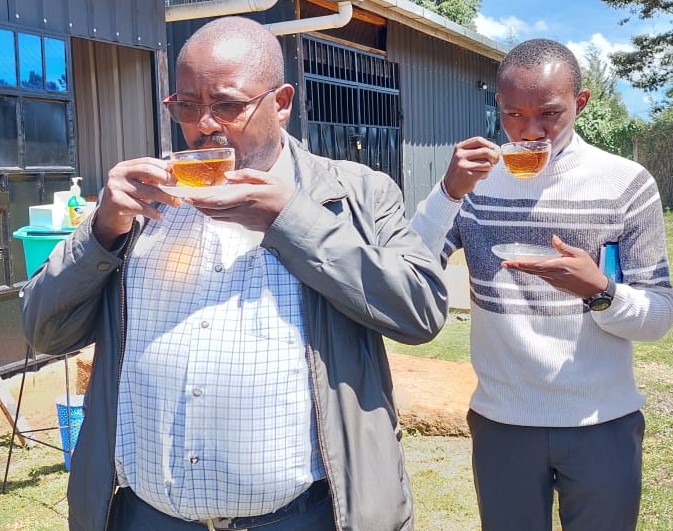 James Marete, technical officer and a staff at the Tea Board of Kenya, drink tea at Ernestea Cottage Tea Factory in Kericho county
Image: AGATHA NGOTHO

For many years, tea was primarily processed and manufactured by only factories affiliated to the Kenya Tea Development Agency or by the big tea estates.

Private investors were not allowed into the tea business.

However, according to James Marete, a technical officer at Tea Board of Kenya in Kericho county, this changed after the repealing of the defunct Tea Act (Cap 343) and the Tea Industry Regulation, 2016.

He said the tea regulation allowed a person who intends to manufacture tea in a cottage factory to apply for a tea manufacturing license from the then Tea Directorate under Agriculture and Food Authority.

Ernestea Cottage Tea Factory is one of the privately owned tea factory that is able to process and compete in the tea market.

Rosemary Rop Lang’at is one of the owners of Ernestea Tea Factory, which is a family business run by nine sisters and their spouses.

She said her father, Ernest Langat, started Kaptebeswet Farm in Kericho in 1961, where he bought the first three acres and then added another 12 acres and planted tea.

“As the years progressed, he continued to expand the farm and planted tea with his nine daughters during the school holiday,” she said.

She added that currently, the farm has more 80 acres of tea which are harvested every two weeks.

Over the years, her father realised there were delays in tea collection from the mainstream factories hence wastage.

“To address this, my parents decided to build a factory where they could manage the tea quality from the beginning to the end of the quality chain," she said.

"The goal was to eventually sell the tea under the name of our family owned business.

“As the family grew and we became adults, luckily, at the same time, the tea board established a new policy in 2016 that gave an opportunity for farm owners to process their own tea in cottage factories."

She said they registered the company where all her sisters and their spouses are registered shareholders.

They have so far spent close to Sh100 million to put up the factory, which is inclusive of land expansion, machinery and personnel. Rop said they are still investing more, especially on marketing.

“We have a very strong governance structure that enables everybody to use their talents and to contribute resources which we have put together to establish the factory,” she said.

They have focused on Orthodox tea and specialty teas and, so far, they have been able to take black, purple and yellow teas to the market.

“Today, we are privileged to have made our first batch of yellow tea. Everyday it’s an exciting opportunity to see the new flavours and quality that we can give our customers,” Rop said.

“The process of putting up this factory has been an adventure and a challenge that as a family. We have come together and put our resources together and looked for the best machinery that we could find to produce the kind of tea that we want.”

So far, they are working with 300 tea growers to produce tea so that they are able to achieve their target of producing at least 2,500 kilos of green leaf a day.

Their target market is European, North American, United Arab Emirates and even countries like Canada. They are looking at people who have the tradition and culture of drinking Orthodox tea.

“Getting those markets and developing relationships with the market so that they trust us to help us understand the whole logistic chain is the challenge,” she said.

She further said running a family business can sometimes be challenging, but the success of their business is based on the fact that they work together as a family.

“Everybody has a different personality, different expectations, different ways of working but what we’ve done is we’ve taken advantage of government instruments," Rop said.

Installing biogas system costs an average of between Sh80,000 to Sh100,000
Counties
1 month ago