Raila, Karua turn to God ahead of Tuesday vote

Described as a spiritual brother , Raila was gifted a shawl of leadership, similar to Prophet Elijah's in the Bible

•At least 22,120,458 million Kenyans are expected to participate in  Tuesday’s general elections.

…Raila Odinga alongside his running mate Marth Karua attended pre-election prayers that were held at the KICC, Nairobi. 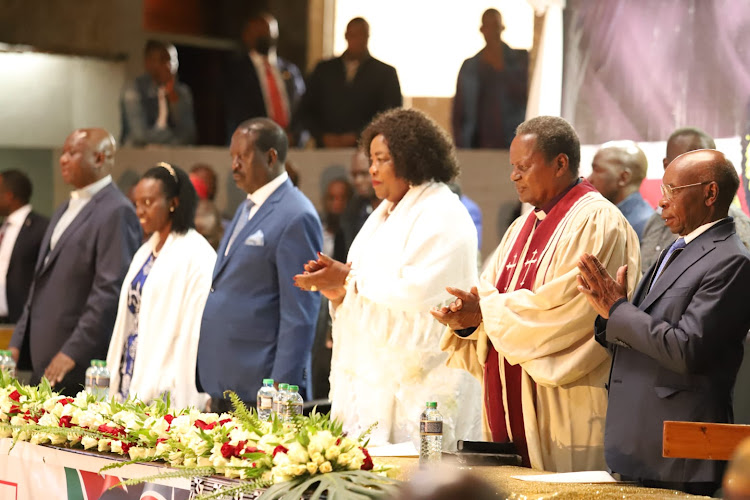 Azimio la Umoja One Coalition Presidential team on Sunday engaged in intense prayers a day to the big day.

Raila Odinga alongside his running mate Marth Karua attended pre-election prayers that were held at the KICC, Nairobi.

They were joined by their immediate families and flanked by the Azimio La Umoja principles led by Wiper Party chairman Kalonzo Musyoka.

" I Raila Amolo  Odinga son of the late Jaramagi Oginga Odinga and mama Mary Eva Odinga hereby take this opportunity to dedicate this nation, Kenya to you Almighty God of all creation in the name of the father, son and the Holy Spirit," Raila prayed.

They also took the opportunity and pray for the families of the former and late presidents, Daniel Moi and Mwai Kibaki.

A special prayer was also said for the outgoing president Uhuru Kenyatta and his families.

The Odinga's family was handed a Kenyan flag to symbolize power and supremacy. The flag was received by Raila's brother Oburu Odinga.

Raila who was described as a spiritual brother was gifted a shawl of leadership, similar to what Prophet Elijah was given in Bible.

Karua was given a set of cups which were to be used while hosting guests at the Deputy president's residence.

The secret weapon to our combined strength, Raila praises Ida