Fact Check: Rocks delivered to Abidjan instead of cars?

The rock was taken from a mining site in Malawi’s northern Rumphi District and brought into the ministry’s custody for proper valuation. 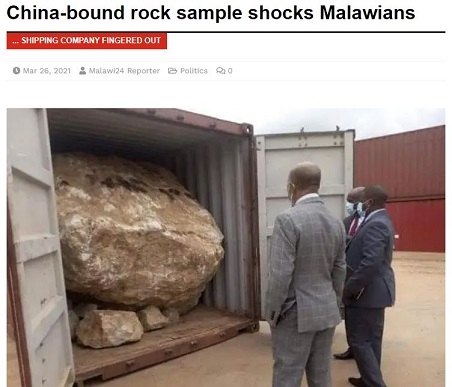 An image of a gigantic rock in a shipping container has been shared thousands of times in social media posts claiming that it was delivered to a port in Ivory Coast’s capital Abidjan instead of two vehicles that were ordered online from Dubai.

The claim is false: the image shows the minister of mining in Malawi during the interception of a Chinese-bound shipment of quartz rock from the capital Lilongwe.

The image, which shows an open container and three men in suits inspecting the cargo, appears in this Facebook post from Nigeria. It has been shared more than 400 times since publication on November 30, 2021.

“Yesterday morning at Abidjan port,” reads the caption on the photo. “They were waiting for two Toyota Corolla vehicles, bought online from Dubai (sic).” 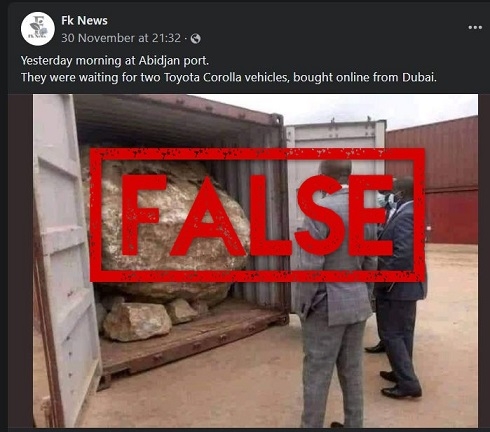 Social media monitoring tool CrowdTangle revealed that the claim has spread to other African countries, including Kenya, Gambia and Somalia.

But the photo of the rock is unrelated to the Port of Abidjan. Rather, AFP Fact Check found it was taken in Malawi’s capital Lilongwe.

A reverse image search on Google shows the photo has been circulating online since at least March 2021, accompanying several false claims ranging from dubious vaccine deliveries to Malawi to an illegal shipment from Zimbabwe to China.

But AFP Fact Check traced the photo back to the website of Malawian online media outlet Malawi24 in a report from March 26, 2021, about a rock sample destined for China.

The report further identified the three men with masks standing in front of the open shipping container as Minister of Mining Rashid Gaffar and other officials from the ministry.

Malawian daily newspaper The Daily Times reported that Gaffar was inspecting the export of the 25-tonnes of rose quartz mineral rock originally valued at two million Malawian kwacha ($111,792) following doubts over its true worth.

“I have stopped the exporting of the precious rock because I would like to investigate its true value. I hear such rocks can fetch over K170 million [$9.5 million],” the newspaper quoted Gaffar. “So, we will wait for experts to value the quality of the rock before it is sold.”

Gaffar’s spokesperson Sangwani Phiri told AFP Fact Check in March 2021 that the rock was taken from a mining site in Malawi’s northern Rumphi District and brought into the ministry’s custody for proper valuation.

“This story happened on 25th of March 2021,” Phiri said. “It was just one of those rocks whose mineral value is yet to be fully assessed by an independent evaluator.”