Are Africans immune to corona virus?

• According to Ziraba, there is no clinical study to back the claims that Africans have natural immunity.

• He said the low cases in Africa could be a result of under-reporting or misdiagnosis, a theory that is backed by Africa’s weak health system. 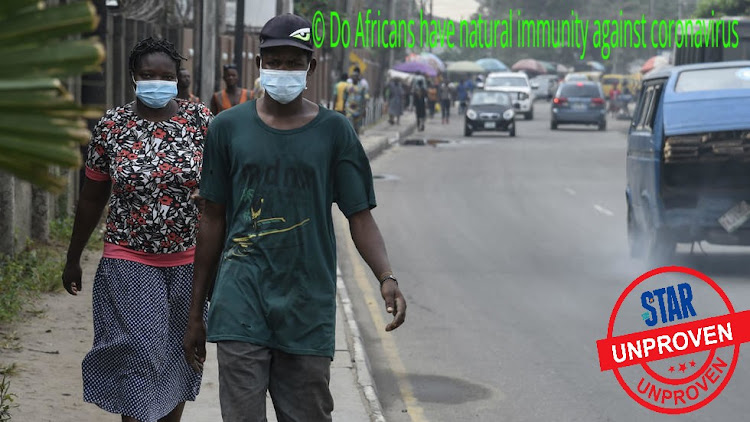 Over the past few weeks, there has been a rumour that Africans are immune to the current corona virus disease.

This narrative has been widely shared on social media after it emerged that an African man had been treated and cured of the disease.

Despite numerous fact-checks that have been published, the narrative has still been circulated widely, on the grounds that Africa has reported low cases amid alerts on high risk of infection.

But is it true that Africans are immune?

Claim: Africans are immune to coronavirus

This claim was shared on a Facebook post several days after the outbreak of the disease in China’s Wuhan district.

The post claimed that a man had been cured because he had a ‘black skin’.

The Star’s fact-check team has been following since then and established to date there is no scientific evidence to link the cure to the race of the man. 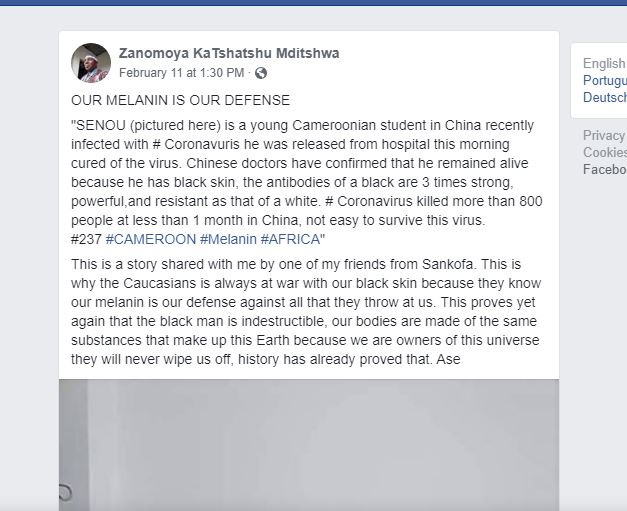 The desk established that Senou a Cameroonian student studying at China’s Yangtze University was admitted to hospital in early February and was successfully treated.

This was confirmed by the Chinese Embassy on Twitter.

An article was then published at news.af.feednews.com implying that Senu had been cured because he was black.

The article indicated that Chinese doctors said Senou remained alive because he has black skin, the antibodies of a black are 3 times stronger, powerful and resistant compare to that of white.

This article was then shared on Facebook in South Africa and by the following day, it had received over 2,000 shares.

Since then, the post has been widely shared in Kenya and Nigeria.

As governments across the world grapple with the Coronavirus outbreak, WHO has reiterated the need to enhance surveillance and response activities and share critical information, as being essential to containing the outbreak and strengthening health systems.

China has the highest number of cases at 80,304 with the death toll standing at 2,946. Out of these deaths, 31 had been reported as new since the outbreak in Wuhan.

Outside China, WHO data shows 10,566 cases have been confirmed in 72 countries.

A total of 166 deaths have been reported. 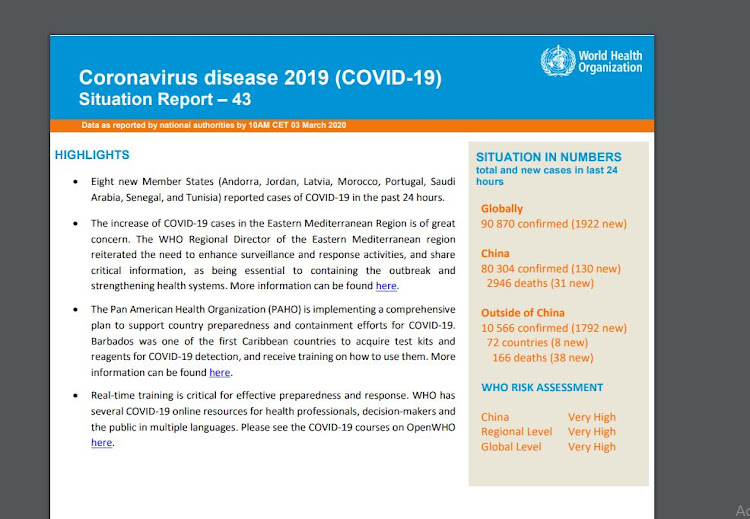 The risk of infection both in China and globally is very high.

The African continent is estimated to have a population of about 1.3 billion.

The continent has close commercial links with China and there have been fears that the virus would spread due to the fragility of its medical services.

Africa has only reported 12 cases as of March 4, with Algeria having the highest number of cases at five.

Other countries with patients who tested positive for the virus are;

Kenya which was perceived as a hot spot due to its close ties with Beijing has had over 15 alerts but all tested negative.

Out of all the cases, African Union data shows, they are imported cases by foreign nationals either on transit or visiting the said countries. 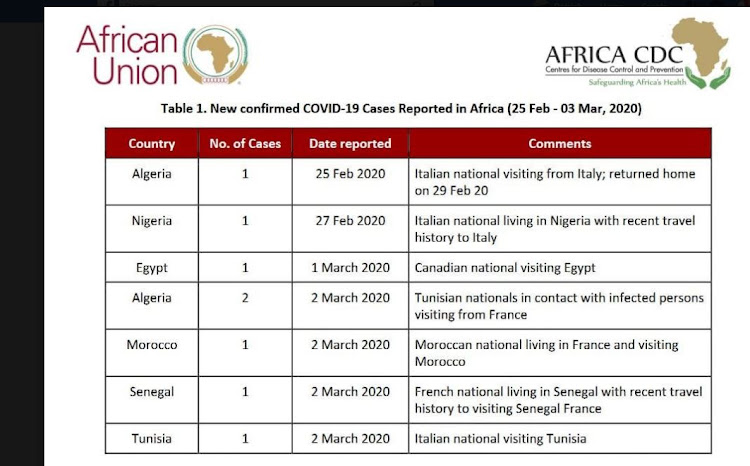 Coronavirus is a small micro-organism that cannot be seen by the naked eye but through specialised equipment.

Epidemiologist Abdhalah Ziraba said the virus can survive in animal bodies but has the ability to survive on surfaces for at least 7 days.

The virus is described as a circular object with sparks that look like a crown, which is where it derives its name.

Ziraba said the virus is a close relative to those that cause the common cold that we get all the time.

“While other flu’s are characterised by mild symptoms like headache, fever, sneezing and coughing, corona has a severe lung infection which is a sign of pneumonia,” he said.

Ziraba said the accumulation of water in the lungs denies them oxygen hence causing failure to breathe and ultimately death in some instances.

According to the expert, many of those who are infected don’t get severe symptoms and can recover with timely intervention.

He puts between 1-3 the number of complicated cases out of 100 infections.

The complicated cases are attributed to pre-existing medical conditions like diabetes that compromise the immune system.

The disease coded as COVID-19 originated from China in a food market said to be selling animals.

Omolade Awodu, a professor of haematology at the school of medicine at the Nigeria’s University of Benin, told Africa Check this is a  new virus and very little is known about it. 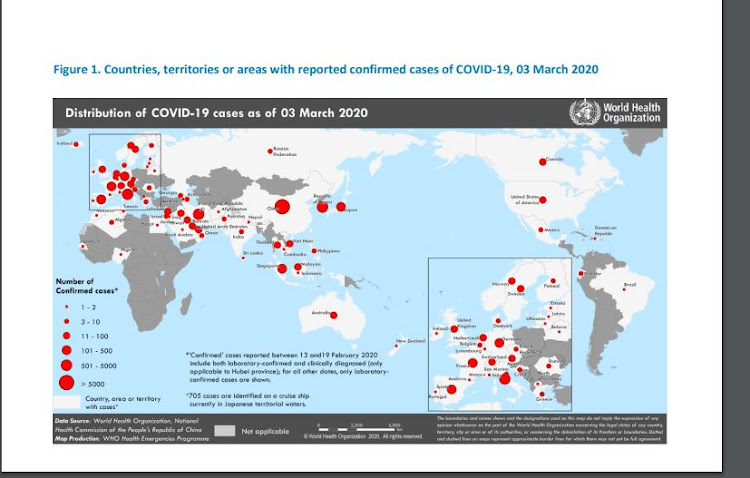 She said in the decades of research she has not come across any research that confirms the claim that African blood composition or black skin resist coronavirus.

The Star is certain that the perception that Africans are immune to the disease is unproven.

According to Ziraba, there is no clinical study to back the claims that Africans have natural immunity.

He said the low cases in Africa could be a result of under-reporting or misdiagnosis, a theory that is backed by Africa’s weak health system.

“Although the disease is a viral infection, there is no evidence to link the disease to the difference in race,” he said.

He said though not yet confirmed, the disease might be thriving in cold weather, and by the fact that both the southern and northern hemispheres are experiencing winter, it would explain why those areas are more affected.

No proof African skin, blood is resistant to coronavirus

Antibodies of a black claimed to be three times stronger and resistant.
News
1 year ago

These sentiments are echoed by the research arm of the doctors without borders MSF who said Coronaviruses, which include some of the viruses responsible for the common cold and flu, can show something called seasonality — that is, they peak and wane depending on the season.

In an interview with DW the doctors said many cold and flu viruses peak in winter, for example; the droplets sneezed and coughed out by people spread more easily in winter's cold dry air and when people are crowded inside together.

They then die down in warmer weather. 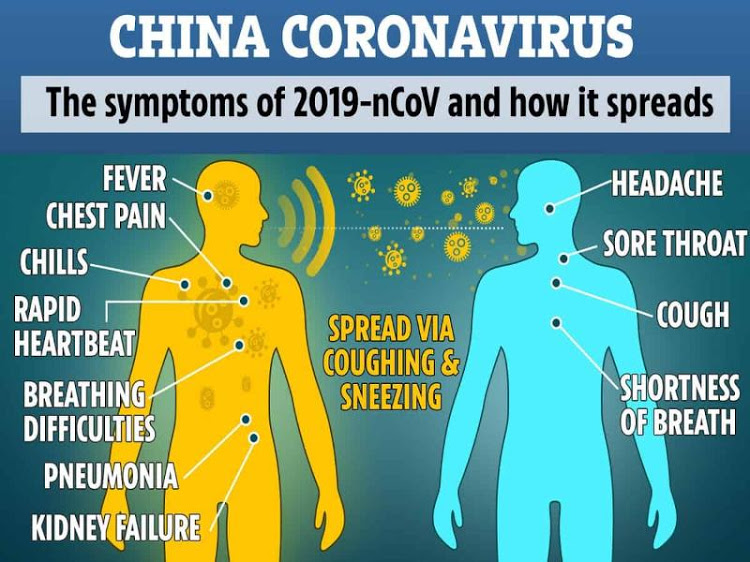 "When the season is warmer and more humid, the droplets transmitting the [flu virus] tend to fall out of the air more quickly, therefore limiting its transmission," explained Yap Boum.

Professor Amadou Alpha Sall, director of the Institut Pasteur in Dakar, Senegal told AFP that, “Ethnicity and genetics have no influence on recovery from the virus, and black people don’t have more antibodies than white people.

To him, there is lots of false information about the disease and this was an example.

Kenya among nations yet to report a positive case, over 15 alerts have been reported
News
1 year ago

Once the mask has been used, it should be discarded properly to avoid causing infections.
News
1 year ago
by DIGITAL DESK
Fact Checker
04 March 2020 - 16:58