Many hospitals lack skill, capacity and service is left to donors to fund

• Cleft lip and cleft palate are birth defects that occur when a baby’s lip/mouth don’t form properly during pregnancy. They affect a Child´s ability to speak, hearing and self esteem issues

• The procedures are small, life changing but very expensive. The minimum amount a parent must have for the whole process ranges from between Sh250,000 and Sh450,000, depending with the hospital 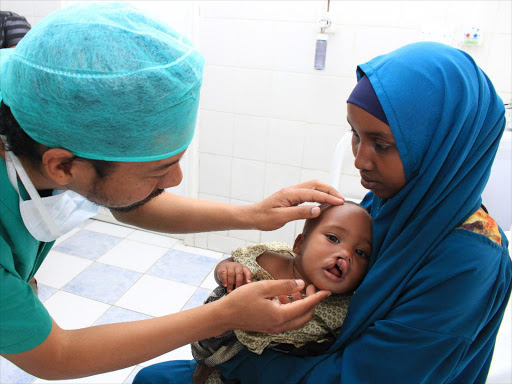 Cleft lip and cleft palate are birth defects that occur when a baby’s lip or mouth doesn’t form properly during pregnancy. Raising a child born with either form of the clefts can be quite challenging, but on the good side, both are surgically amenable.

Dr Martin Kamau, an oral and maxillofacial surgeon at Bela Risu Medical Centre, says there are no specific causes for cleft lip and palate. However, there are factors that can contribute, including genetics.

Parents with positive family history of cleft lip face a higher risk of having a baby with a cleft. Others include being diagnosed with diabetes, not getting good antenatal care, poor feeding and substance abuse during pregnancy (such as smoking and taking alcohol).

“A child can be born with cleft lip and palate without a family history or both parents not having the defect. There is also a likelihood of the second child to be born with a cleft if the first born suffered the same,” Dr Kamau said.

It is estimated that six children are born daily (over 200,000 annually) with cleft lip and palate in Kenya. Many families can't access the needed medical attention due to their low social economic status, lack of enough doctors in that specialty and local hospitals that are not fully equipped with the needed medical supplies.

Currently, it's private institutions and foreign donors that are leading in funding to conduct the much-needed surgeries.

Bela Risu Medical Centre in Ngara Nairobi, which was opened in September, in partnership with Smile Train is the first standalone comprehensive cleft care centre in East and Central Africa that is dedicated to the provision of free cleft services to the less privileged and in most need across the Country and Africa.

Children with a cleft lip and palate will need several treatments and assessments as they grow up. The minimum amount a parent must have for the whole process ranges from between Sh250,000 and Sh450,000, depending with the hospital.

To begin with, the cleft lip surgery is mostly done when children are three months old. At this stage, children cannot feed properly and most of them get malnourished. As a result, they experience stunted growth in comparison to children who are born around the same time. A child might be required to spend a day or two at the hospital for the clip to be repaired and closed with stitches.

The surgery takes between 45 minutes and 1 hour. This is then followed by cleft palate surgery at 9 months. This is the stage where the roof of the mouth is closed. An anesthesiologist is required during this process.

Dr Khadija Ahmed, an anesthesiologist and co-founder of Safe Surgical Aid, says the cleft sometimes leads to micro aspiration. When children take drinks, it gets into the air wave because they are close to each other. “What we are correcting is the opening to each other, the airway and the mouth.”

At the age of six years, the alveolus, which has been affected by the cleft, will need reconstruction and grafting to fill the gap in their gum, which helps permanent teeth to erupt and allow maxillary stability.

Some children might require to wear teeth braces, which are also not cheap. The cost of braces starts from Sh70,000. “The braces help to straighten the teeth as the child grows,” Dr Kamau said. Other follow-up treatments that might be required include improving the jaw appearance and shape of the nose.

Cleft also affects a child's ability to speak, and they would need to undergo speech therapy to help them communicate well. Children are also susceptible to hearing problems due to the malfunction of the Eustachian tube.

Dr Kamau suggests that all these stages of treatment require commitment and well managed follow-ups to help the child recover properly. Most parents cannot access this kind of services due to their proximity to health facilities.

“We do outreach programmes to communities in the village, but we are limited due to lack of funds, which also hinders us from bridging the gap of offering the comprehensive care the patients need through the whole process,” Dr Kamau said.

Dr Khadija agrees based on her experience conducting a medical camp for cleft surgery in Northeastern. “One of the challenges is that most parents could not afford to cater for their basic needs within the period. They also had to spend the night at the hospital to give their children company, which in turn contributed to overcrowding. The funds were not enough and it was an unexpected situation, but in future, we can plan to have an isolated ward outside from the referral hospital.”

Children who grow up with this condition experience self-esteem issues and end up isolating themselves from others. This hinders a child's ability to interact and socialise as they inhibit a withdrawal behaviour. The transition from home to school can also be stressful to them. The inability to effectively communicate will impact their education and foster a feeling of insecurity.

Families also hide their children in the houses in fear of exposing them to the public because of unwanted attention. Dr Kamau says despite the high number of children and adults with cleft, it's hard for any Kenyan to tell the last time they came across one.

Lastly, the procedures are small, life-changing but very expensive. Dr Khadija urges the government to create awareness and partner with donors for funds to enable Kenyans access the treatment. They should do training for doctors who can offer this kind of specialised surgeries as they are few in this field.

She concluded by saying, “I would also wish to appeal to Kenyans to get involved as a way of giving back in terms of their time, manpower, expertise and donations.”

Surgery that helps kids smile for first time in their lives

• Culture and lack of medical information have led many communities in Africa to attribute the condition to a curse or ...

Long ago, children born with cleft lips in Europe were seen as proof of not just the child’s demonic nature but of the ...