Drought is worsening in some areas, but county also needs infrastructure

• Hampered by drought and delayed funds release, he lays out his agenda for change 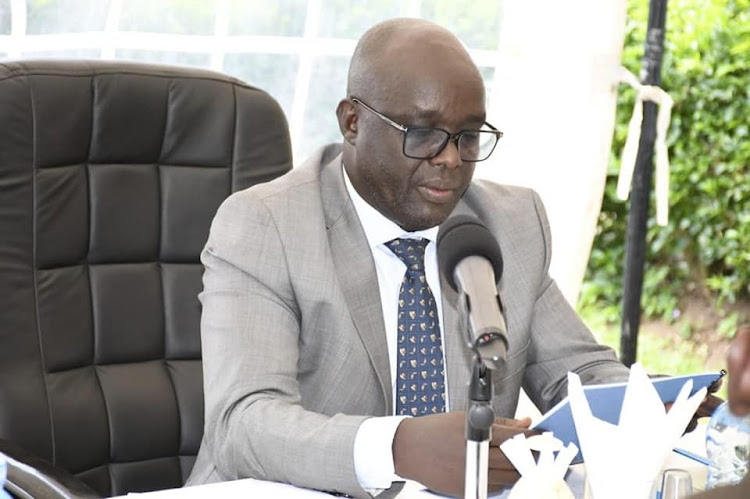 While many parts of West Pokot county are suffering drought, Masol and Pokot North are at an alarming level.

"However, we are working with the Ministry of Interior and National Coordination, Red Cross, World Vision and other partners on cash transfers to the vulnerable and food aid," Kachapin told the Star during a visit to the county.

He says agriculture is indeed the backbone of the county as it supports the livelihoods of the common mwananchi, providing them with enough food and selling the surplus.

The governor said agriculture is the main support for food and security and promotion of the local economy.

"Our plans for the next two years are to provide seeds and seedlings to farmers, enhance irrigation, plough farms and improve livestock breeds," he said.

He says even though some parts of West Pokot are semi-arid, a good part can support dairy farming and horticultural farming.

Kachapin says the arid parts also produce some of the best honey in the country.

"Therefore, we are making investments in a dairy processing plant in Lelan ward. This move will prompt more farmers to embrace dairy farming to improve their incomes and livelihoods," he said.

In terms of milk production, the governor says his administration is focusing on extension services and supporting the cooperative development that will provide credit to acquire dairy animals and ultimately enhance milk production.

We are also ensuring AI services are sufficient to enable farmers to improve their breeds.

He says they have already embarked on vaccination campaigns to eradicate livestock diseases and achieve a disease-free county and ensure they meet international standards of meat products.

On milk and honey production, the governor says they encourage beekeepers to get into cooperatives to acquire loans to boost their production.

"We plan to support the honey-processing plant in Kitale Kapel to process larger quantities of honey that meet the required standards," Kachapin said.

He added that they have a number of NGOs already on the ground, supporting honey production through training and financial support.

We are working with the Ministry of Interior, Red Cross, World Vision and other partners on cash transfers to the vulnerable and food aid

In terms of milk production, his administration will specifically focus on extension services and supporting the cooperative that will provide credit for acquiring dairy animals.

"We will also ensure that AI services are sufficient to ensure that farmers can improve their breeds," he says.

The governor says vaccination of animals is top of their agenda to ensure the meat and milk is up to market quality.

He says they are also encouraging diversification from traditional maize farming to coffee, tea, pyrethrum and other horticultural produce.

The governor says in 2013, they were a new government just like most first governors and, therefore, their allocation was very low.

"West Pokot county had an allocation of only Sh3 billion," Kachapin said.

This amount was to be used for salaries and remuneration, purchase of vehicles for service delivery, including ambulances for Kapenguria Referral hospital and also the subcounty hospitals.

It was also meant for construction of new offices at the headquarters and in the subcounties, opening up new roads and maintaining existing ones and building new markets.

He said this resulted in a difficult time balancing all this important infrastructure for the government to be functional and provide services.

"However, we managed to purchase a drilling rig and sunk a number of boreholes in water-scarce areas of the county. We also constructed water pans and sub-surface dams for animals," he said.

He said their plan to boost water supplies is clear. They have assessed all water rigs to identify their condition and have started repairs and one is out for use.

"In addition, we have procured a rig and we are expecting it by March next year. We shall also scale up and build water dams in collaboration with the national government, especially in North Pokot and Masol. This is because we normally have heavy rainfall between April and August, and this water is lost towards Lake Victoria or Lake Turkana," he said.

He said they will also work with the national government to fast-track the Siyoi Muruny River water project and also focus on long-term projects of environment to protect their ecosystem for future generations.

Kachapin said currently, the county does not have water dams, except for Turkwel Gorge Dam, which serves several purposes.

These include hydroelectric power production, irrigation tourism and fisheries. But they intend to build two or three dams.

He said West Pokot, just like the rest of the world, has been affected by climate change.

"Areas like Parua, Tamkal and Nyarkulian were largely affected by floods and landslides that led to a loss of lives, property and livelihoods," he said.

The county boss said with the rise of deforestation to give way for farming, rural communities are set to be more affected by climate change if actions are not taken quickly.

He said they will lobby with the national government and other partners to support rural communities that face the impact of climate change and take action to protect the environment.

"I have also noted that rural communities have big opportunities to take action against climate change," he said.

"However, due to poverty, high illiteracy level and the high rate of population, they cannot help themselves.

The governor said tropical diseases, especially malaria and tuberculosis, have long been a public health problem in the county.

"We still have high cases of malaria and TB, but we’re working on reducing them," he said.

They plan to build public health capacity in partnership with donors, improve health security through the supply of drugs and non-pharmaceuticals to impact the health and well-being of the people, and acquire cancer diagnostic and treatment equipment in the next five years.

The governor said after they took office in August, they allocated the little resources available to repairing ambulances and vehicles, pay debts with Kemsa and buy more drugs and equipment.

"So far, we have supplied drugs and consumables worth Sh45 million.  We have put in place rapid malaria diagnostic tests and treatments for malaria," he said.

He said they plan to distribute mosquito nets to residents in the areas most affected by malaria, such as Riwo, Masol and North Pokot.

The governor said insecurity is still rampant along the borders with Marakwet and Turkana.

He said insecurity on the Pokot-Uganda border has mostly been controlled via heavy deployment of army personnel.

Kachapin said the county still has isolated cases of insecurity on the Pokot-Turkana-Marakwet borders.

"Let me point out that if we as leaders preach a rallying call for peace, we will be able to curb these conflicts," he said.

"For example, conflict that arises due to pasture should be addressed with the provision of borehole water by sinking boreholes and encouraging our communities to set aside land for pasture," he said.

He said while education is still a sector that is controlled by the national government with the county government focusing on ECDE, we also have a role to play to strengthen our education system.

The governor said illiteracy rates are still quite high in the county and collectively, they are finding solutions to this gap.

He said enrolment and retention rates are still largely affected by many factors, including insecurity, poor roads and poor health infrastructure.

"During my first term, we established an ECDE college to train ECDE teachers. Unfortunately, my predecessor ignored it and closed it. It is now a shell at Aramaket Centre," he said.

He said they have begun the process of opening up the centre and will provide sufficient ECDE teachers to all centres across the county.

"We have also put aside funds to support students in secondary schools, colleges and tertiary institutions with a Sh25,000 bursary kitty. We also plan to offer full scholarships to students from vulnerable backgrounds," the governor said.

He said they have already budgeted to improve road networks, especially in hard-to-reach areas.

He pointed out a major challenge they have is the delay of funds from the Exchequer.

He said this has delayed service delivery and affected many other areas.

The county boss said the 2022-23 Annual Development Plan is the seventh publication produced by the county government of West Pokot and its stakeholders.

He said the document contains the development aspirations of the county for the fiscal year under consideration.

"It also contains a description of proposals with respect to the development of physical, intellectual, human and other resources of the county," Kachapin said.

He said the Pokot elders from Kenya and Uganda have committed to engaging all stakeholders in initiatives towards the fight against FGM in the community.

The governor said his administration will focus on child protection, working closely with the chiefs, elders and communities.

He said one of the reasons that make children drop out of school is poverty and lack of school fees.

"We are also working to fight FGM with partners such as I-Rep Foundation to sensitise communities on the effects of FGM," he said.

He said they intend to build shelters for girls running away from FGM and early marriages.

He said as a semi-arid area, the county has been marginalised since colonial times.

A number of counties have requested to be included as ASAL to benefit from the Equalisation Fund.

Kachapin is opposed to that move because the needs of the ASAL are not at par with other counties which have received development funds for the last 50 years.

He said they have already completed appointing, vetting and inaugurating county executives.

"We have also completed advertising, interviewing and swearing in our chief officers. We already held several Cabinet meetings to plan our agenda for service," the county boss said.

He added that their plans to operationalise the Nasukuta Export Abattoir in Cheraperia and a milk-processing plant in Lelan will revolutionise their agricultural sector and strengthen the economy.

Post a comment
WATCH: The latest videos from the Star
by ELIZABETH WERE
Big Read
09 January 2023 - 05:00
Read The E-Paper