School is a ‘second home’ for students

They are attracted to Nanyuki High like bees to honey, says principal

• School principal Oliver Minishi says he leads to serve, not leading to be served

• He says when dealing with Gen Z, it’s better to allow them explore their capabilities 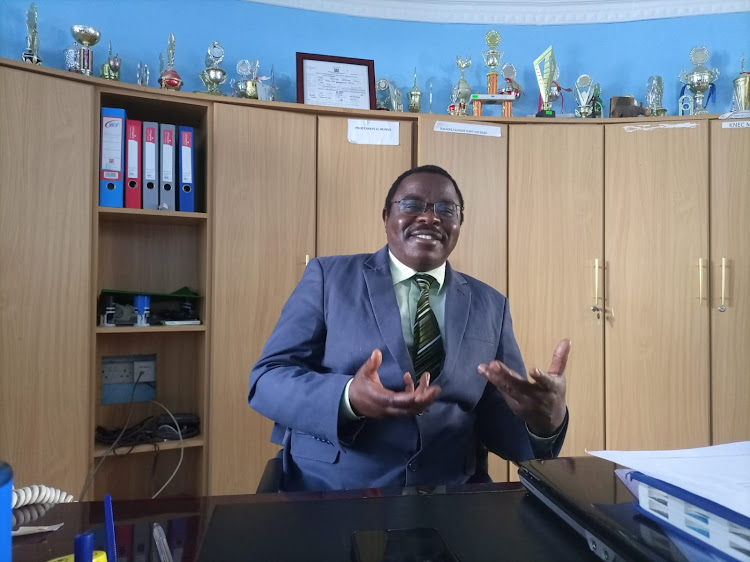 Nanyuki High School principal Oliver Minishi during an interview at his office on May 9
Image: LAURA SHATUMA

On the second floor of Nanyuki High's grey and sky-blue administration block lies the office of the principal, Oliver Minishi.

More than 15 trophies are arranged on top of the closely knit shelves of this huge office.

Minishi recalls his father, a primary school teacher, telling him to follow his steps but take his dreams a notch higher.

Speaking during an interview with the Star, Minishi said the school is a second home to more than 1,350 students.

He describes Nanyuki High as a home of sweet honey that is attracting ‘bees’.

“The idea is just to sacrifice, passion to serve and good things are like honey because it’s sweet, so bees are attracted,” Minishi said.

The maths and physics teacher explains his journey as a teacher and what he does differently that students find attractive.

“The idea isto  make learning be controlled by the students and not the teachers, and that’s what CBC is doing,” he said.

In his family, he is the only teacher; none of his brothers pursued the teaching career.

Minishi deals with students strategically to make the school environment feel like home.

“General welfare atmosphere of the school is very friendly. If you are trying to bully others, we will send you away,” Minishi said.

Whenever he is within the school premises, he is never at peace knowing things are not right at school.

This, however, does not sit right with a number of people he interacts with; they feel neglected.

“I cannot even sleep in my house when I know there’s a problem in school. I go to the house one minute and then I go back to school,” Minishi said.

He assures students at Nanyuki that by the time they finish Form 4, they will leave better than they came.

"As a person, I have this fulfilment of converting people and making them better than I met them," he said.

Minishi has embraced servant leadership, which he says helps him run the much-sought-after national school.

A renowned playwright, Minishi is using the ideas he has to deal with the Generation Z students.

“Every day I wake up with a new idea. If you ask me what I will do tomorrow, I don’t know, but something will definitely come up,” he said.

He says when dealing with this group of students, it’s better to allow them to also explore their capabilities.

At Nanyuki High, the students are exposed to a wide range of activities, including chess, karaoke and taekwondo.

The school won the best play, 'Nail in the Flesh', at the regional level in Rift Valley.

“You just have to do something interesting every day particularly to make them feel like they are at home and they are loved,” he said.

Just like he used to do at Kakamega High, Minishi has also championed exploration of learners' interests.

In this case, if a student does not excel in academics, they still have a chance with their talents.

“Looking at the potential of a child and making sure that potential is grown-up at the highest point,” he explained.

Minishi gave an example of students who would score below C- in class but had their talents improved.

“If you are a footballer I ensure you go far. In Kakamega, there were boys who used to perform poorly but now they are playing professional football,” he said.

While at it, he also oversaw the upgrading of students’ talents especially in football, drama and rugby.

By the time he left Kakamega, the school football team, called 'Green commandos', had joined the big leagues.

"Some rugby players at the time went to play in the Dubai Sevens and I'm proud of that," he said.

The school has 81 teachers and 30 support staff. It was started in 1964 as a hostel for the children of the British Army and registered as a school in 1969.