Man with 150 cats restores the pets’ dignity in Mombasa

• It has since become life's obsession. He hates it when locals associate cats with majini 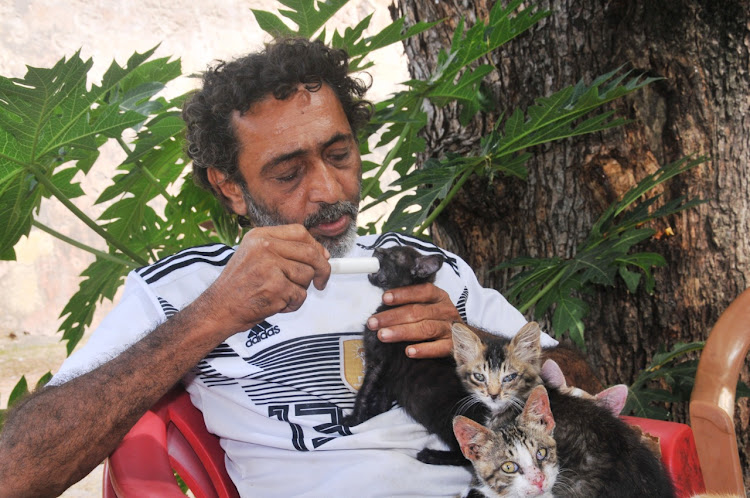 LOVER OF CATS Hussein Mohammad feeds one of his cats with milk during the interview
Image: LABAN WALLOGA

He is a cat whisperer who enjoys their company more than humans’. We find him seated under the trees near the famous Fort Jesus in Mombasa, surrounded by a large family of cats.

Hussein Mohammad, 54, is Mombasa’s cat-man or ‘Baba Paka’, as he is fondly called by friends, relatives and visitors.

He keeps about 150 cats, and together with his siblings, they have about 300 cats. Besides Fort Jesus, the cats are scattered in Barsheba, Stage ya Paka and Mlaleo.

He started keeping cats in 1978 after his father, Ahmed Mohammed, bought him two kittens.

“I remember one day my father came from Nairobi and brought me a gift. Inside the box were two kittens. This is when my love for cats started,” he recalls.

He did not know the love he had for the two little cats would blossom to the level of now rescuing stray cats and taking care of them.

Fond as he is of the title ‘Baba Paka’, Mohammad is alive to the superstitions surrounding the pet. What disgusts him the most is his cats being linked to witchcraft.

There is an old perception in the coastal city that cats are linked to witchcraft and evil spirits.

Ever heard of the phrase “paka jini”? Yes, jini is a Swahili word for demon or evil spirit.

Mohammad is no stranger to being accused of rearing “majini”. But he takes it in his stride. After all, cat rearing has become his life’s mission.

In the 90s, Mohammad quit his fishing job to focus on ensuring his cats are safe and healthy.

The fourth born in a family of eight was earning good money from fish, which was very lucrative back then, but he decided to quit and dedicate his time to the cats.

So much fishing, so little fortune: What the industry should change

I have no intentions of ever getting married. These cats are my family. They give me peace of mind, unlike humans, who like to gossip a lot

At 54 years, Mohammad does not have a child, nor is he married. He considers his cats the only family he has, apart from his parents and siblings.

He says marriage is not something he cherishes. His cats are his companions.

“I have no intentions of ever getting married. These cats are my family. They give me peace of mind, unlike humans, who like to gossip a lot,” he says.

Mohammad says the love of cats runs in their family lineage. His grandfather was among the first people to keep cats in Old Town.

At their family home in Old Town, they have 16 cats. In other homes in Kisauni and Tanzania, where his sister married, they have many cats roaming freely.

Mohammad’s daily routine starts at 8pm. He ensures the cats get milk for breakfast. They are served lunch at around 1pm, and later in the day, they will have something for supper.

His cats take at least two litres of milk for breakfast and 2 kilos of minced meat for lunch. Because of the large number of animals, however, the cats are sometimes forced to scavenge for food in the dustbins around Old Town.

“I feed the cats with minced meat and milk. I do not beg for support nor do I charge tourists who want to see or take photos of my animals. Whatever I have is what I spend on their food,” he explains.

Once in a while, his family members support him with cash to feed the animals.

Each of his cats has a name.

“Malkia, Jugu Jugu, Kidiku, Jigu and Simba are among the ones you see around here,” he says as he points at them.

At the time of the interview, Mohammad was feeding one kitten with milk. One of the cats was ‘coughing’ after it choked on some medication, he says.

Surprisingly, each of the animals knows its name. They respond whenever they are called by their owner.

The biggest challenge is not only feeding the animals but also getting them medication whenever they are sick.

Mohammad wonders why the Mombasa government has not set up a veterinary clinic for animals.

He hopes one day he will get land and build a rescue centre for the abandoned cats in Mombasa.

Currently, he says, he is trying to establish water points for his cats within Old Town because most of the time, they drink from open sewer.

“The water from the sewer system is not good for their health,” he says.

How superstitions are ingrained in Coasterians 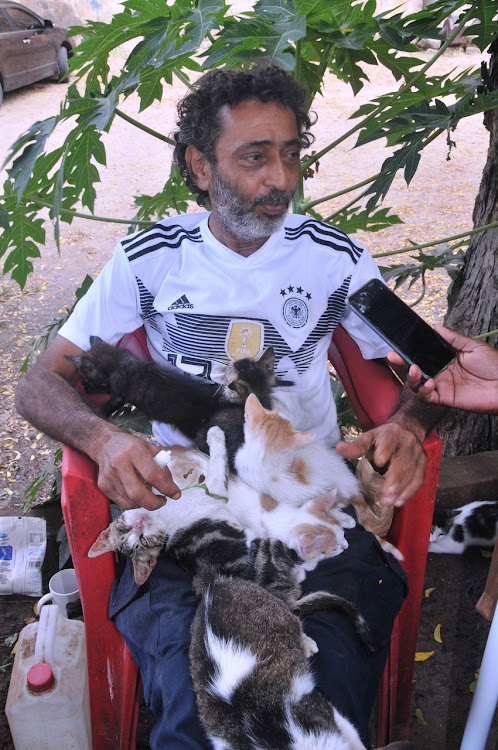 LOVER OF CATS Hussein Mohammad with some of his cats during the interview,
Image: LABAN WALLOGA

Cats have long been associated with evil spirits. In the 80s and 90s, first-time visitors to Mombasa were warned against beating or even pointing a finger at a stray cat lest they appear to you in your dream or in your home at night.

“Si paka yule, ni mtu!” (That is not a cat, but a human being) is a common phrase you will hear whenever you are in the coastal town of Mombasa.

Most residents have also grown up believing that if a cat crosses your path, that is a bad omen and one should cut short his or her trip or change your path.

A black cat is the most feared.

However, Mohammad says the idea that cats are evil is not factual. He says cats are the most harmless creatures.

“Hamna majini. Paka hawezi kua jini, bana! (There is nothing like evil spirits, cats cannot be evil spirits),” he says in a deep Swahili accent.

He says for more than 20 years, he has been staying with the cats and he has never seen or heard a jini in them.

Mariam Mimy, 44, from Barsheba in Kisauni, says Mohammad’s nature of keeping cats shows he is a man fond of serving other beings apart from humans.

She says Mohammad should be respected for keeping straying cats, rather than being branded names.

“The cats were left to wander around without food or shelter. If they are now in the hands of a Good Samaritan, why vilify him for his charitable acts?” Mimy asks.

She says she grew up in Majengo, Mvita, where they used to hear tales of people transforming into cats at night.

“We also used to hear stories of people flying using brooms, but these were just stories that do not have any iota of truth in them,” she says.

Hamis Ibrahim, a Mombasa resident, says the perennial association of cats with witchcraft and evil spirits cannot be further from the truth.

The 51-year-old, who was born in Mazera, Kilifi county, says the negative stories around cats are misplaced and untrue.

“Cats, pigeons and bats have for a very long time been linked to majini, but that is not true,” Ibrahim says.

He says most people associate a cat’s shriek, which is almost similar to that of a young child, with witchcraft.

“That is a natural sound produced by cats whenever they want to mate or scare away an enemy,” he explains.

In Islamic teachings, people are prohibited from rearing pigs and dogs because they are haram and najis (dirty), but cats are not condemned, Ibrahim says.

Lillian Wanjala, an administrator at the Kenya Society for the Protection and Care of Animals (KSPCA) centre in Mombasa, says the shriek sound is usually produced by female cats.

“It is a normal sound whenever they want to mate,” she says.

In 2013, an incident occurred in Kisauni, where a cat got its head stuck in a 20-litre jerrican of water.

News spread like bush fire that a witch who was returning home after a “night operation” was trying to transform back from a cat into a human.

The head got stuck in the mouth of the water jerrican.

It took the intervention of KSPCA to set the animal free. No resident was willing to touch the animal as it fought to set itself free.

Following the incident, to date, the place is called ‘Stage ya Paka’. 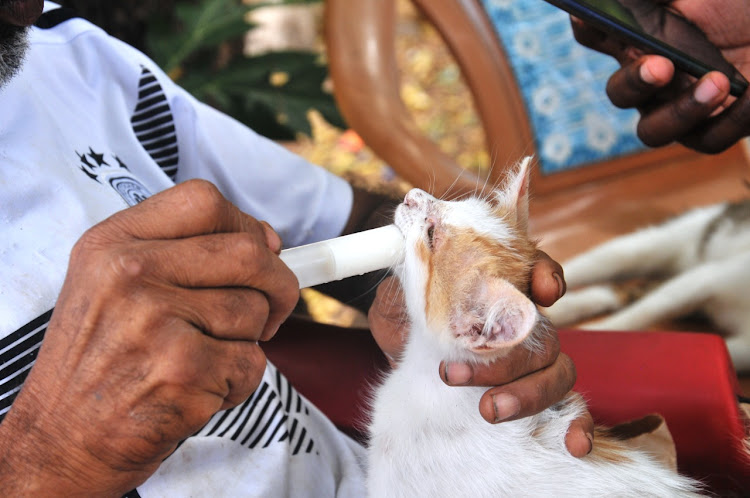 Hussein Mohammad feeds one of his cats with milk
Image: LABAN WALLOGA

The cats were left to wander around without food or shelter. If they are now in the hands of a Good Samaritan, why vilify him for his charitable acts?

Wanjala says KSPCA has been taking care of care of stray, abandoned, neglected or surrendered dogs and cats.

The administrator says re-homing aims to find suitable homes for the animals, where they can be adopted.

Most animals brought to the centre are kept in quarantine for about a month to assess their behaviour before a suitable home is found for adoption.

During the period, they also ensure the animal is healthy and free from disease. They are de-wormed and vaccinated for rabies.

If emaciated and weak, they may be kept longer and fed three to four times a day until they are stronger and closer to their optimal body weight before re-homing takes place.

KSPCA Mombasa centre, which is located in Bombolulu on the Mombasa-Malindi highway, currently has about 130 cats and 60 dogs that are all up for adoption.

Wanjala says most animals are surrendered at their shelter for a number of reasons, ranging from financial problems to relocation to other regions.

“Most of the cats we have here were brought by their owners. Some of the reasons they give are that they are giving birth frequently, so they cannot afford to continue taking care of them,” she says.

A female cat can conceive from when it is six months. It can give birth up to three times a year.

Wanjala says a cat takes some time before settling in a new home or environment.

She says some of the animals they receive are sometimes psychologically affected and traumatised based on the kind of treatment they received from their owners.

“For example, being locked in seclusion for long hours affects the animals. It will take time before they get used to the new environment,” she says.

Currently, KSPCA has 11 staff members dedicated to the animals. The centre depends on donors and well-wishers to pay salaries and all other expenses of the animals.

The centre also employs the services of a veterinarian, who comes in twice a week to check on the health status of the animals.

“To control their population, the cats are normally castrated to achieve this,” Wanjala says.

Adopting a cat from the centre will cost you only Sh500, she says.

'They were family': Owners cry after six dogs die in a month

It's a wild cat: KWS locates animal mistaken for leopard

The team will treat the cat and release her back to the wild.

For the last eight year, James Mukangi has been making a living from selling cat meat samosas to unsuspecting Nakuru ...